Calls for Justice in the U.S. Create a Dilemma for Pro-Israel Policies

The calls for social justice on the American Left have grown in volume and audience in recent years as allies have stood up to declare inequality is no longer an option and unchecked power can no longer stand. The Women’s March of 2017 sparked a new generation of activism. The #MeToo Movement was a catalyst that spanned generations. The killing of George Floyd sparked a national reckoning last year, as a coalition of progressives, organized labor and activists somehow found a partner in Wall Street to declare detente and that, yes, unequivocally, Black Lives Matter.

That was all fine and good for the political mainstream in Washington when it hewed to domestic borders. But in the last two weeks, that consciousness has turned its focus abroad as Israelis and Palestinians clashed. The overnight ceasefire between the parties has given the battered region a breather, but it’s unlikely to be permanent, if history is any guide. During the 11-day conflict, Israel deployed American-made and -funded weaponry into Gaza, and, in a stunning move, leveled a building that housed, among others, The Associated Press’ offices in the Palestinian territory. Apartment buildings were razed because, according to Israelis, some units were housing Palestinian weaponry. In the end, at least 227 Palestinians and a dozen Israelis were dead.

While President Joe Biden quietly supported a ceasefire, the emboldened American Left stood up and said, loudly, no to Israel’s offensive. Woke Twitter — the very online, progressive chorus on the social-media platform — stepped into the breach. Black Lives Matter became #PalestinianLivesMatter. Israel in 2021 was compared to South Africa in the 1980s, channeling, whether they knew it or not, the spine of former President Jimmy Carter’s manifesto, Palestine: Peace Not Appartheid. The arguments weren’t particularly new to anyone who has studied the Middle East for more than a minute, but many went further than Carter did in his analogy.

Here in Washington, the progressive embrace of Palestinian rights has forced some very awkward confrontation. Rep. Alexandria Ocasio-Cortez took the floor of the House last week and made the case for the Palestinian cause — and to challenge the President of her own party for “taking the side of the occupation.” She and other progressive allies called on Biden to abandon plans to sell Israel almost a billion dollars of military aid. “It is long past time to end the U.S. policy of unconditional military arms sales, particularly to governments that have violated human rights,” Ocasio-Cortez said last week.

The fiery remarks were unlikely to move Joe Biden, who has made top-line public support for Israel a constant since his 1972 Senate election. But they underscore the rift among true-blue Democrats at this moment. As Biden was visiting Michigan this week, Rep. Rashida Tlaib, a Palestinian-American, confronted him on the airport tarmac in Detroit over the issue, and the two spoke there for several minutes. Tlaib and Ocasio-Cortez were joined by other left-leaning lawmakers in the House in introducing legislation that would block about $735 million in U.S. weapons to Israel. Sen. Bernie Sanders, a Vermont independent who challenged Biden for the Democratic nomination in 2020, introduced a companion piece of legislation in the Senate the next day.

Since its current inception in 1948, Israel has enjoyed unwavering support from the United States. Indeed, Washington was the first foreign power to recognize it as a nation. As the only democracy in the region, it has always received something of a pass in Washington when it veers into conduct that, in other nations, might have drawn a stern rebuke. Such was the case in 2010 when Biden was visiting Israel with his wife, Jill, at the exact moment when the government of Prime Minister Benjamin Netanyahu announced 1,600 new homes for Israelis on land the Palestinians sought as their own. Biden kept his schedule and dined with the Netanyahus, only to issue a cold statement criticizing the settlements as counter-productive to peace talks.

But Biden’s Left flank is growing impatient with that stance. The internal tensions among Democrats have been on full view for the outside to watch. At times, the rhetoric among progressive activists has veered dangerously close to anti-Semitism, its critics say. The ascendant Left in American politics was always going to find fault with the Right-leaning government in Israel. But the confluence of U.S. domestic activism with social media and instant hot-takes has made this conflict abroad ripe for raw emotion and political performances.

Biden may not be swayed, but as a small but powerful segment of the American political spectrum pushes Washington to reconsider its embrace of Israel, it’s worth considering not just this moment, but the ones to come. According to polling from Pew, 67% of American Jews age 65 and over say they are emotionally connected to the state of Israel. Among Jewish adults under the age of 30, that number falls to 40%. Millennials have more political potential now than any other generation. In 20 years, the current push among progressives to stand up against Israel’s treatment of Palestinians may resonate with a lot more Americans. 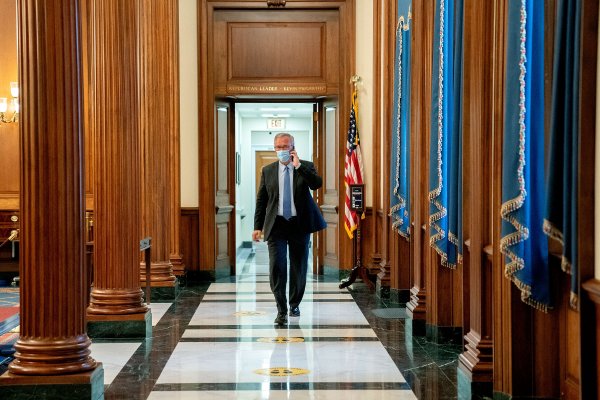 Why Did Republicans Balk at a Jan. 6 Commission? Donald Trump
Next Up: Editor's Pick