Even if the Ceasefire Holds, the Far-Right Will Dominate Israel's Future

Ideas
By Dahlia Scheindlin
Scheindlin is a political strategist and a public opinion expert; she is also a policy fellow at The Century Foundation

Whatever Israel’s recent war with Hamas (which just started a ceasefire) means for the country’s struggle to finally establish a functioning government—and the third Gaza war in the last nine years already has scrambled the outcome of Israel’s fourth election in the last two years—one thing will not change: Israel’s shift to the right.

For all the attention on Prime Minister Benjamin Netanyahu, it is the evolving dynamics within Israel’s sprawling and segmented right-wing political camp that will determine where the country goes next.

Netanyahu’s future is indeed uncertain. The current round of Gaza violence is the third major escalation on his watch. And this time many of Israel’s cities erupted into violence between Israel’s own Jewish and Arab citizens. Voters may will hold Netanyahu accountable. In 1992, after five years of the first Palestinian uprising, Israelis replaced a hardline leader with the dovish Yitzhak Rabin. On the other hand, violence can also rally citizens to the nationalist, militarist right-wing, as it did following the far more violent second Intifada in the early 2000s.

Today, the only alternative to Netanyahu’s rightwing governance is a center-led coalition, but a coalition that will require right-wing parties. That means the next government, and the direction of the region, still depends on the Israeli right.

It’s a question of math. Ideologically right-wing and religious Jewish parties have 72 out of 120 parliamentary seats today—a clear majority. But the camp also splintered.

The right wing of the 1990s and 2000s—call it the old right—had a clear agenda: Stop the Oslo peace process and prevent further land concessions to Palestinians. Be tough on security, expand settlements, entrench Israeli control over the occupied territories.

The old right was furious when in 2005, their erstwhile champion former Prime Minister Ariel Sharon withdrew Israel’s settlements from Gaza. In response, the right wing fought to bring the settlement project from the fringes into mainstream consensus in Israel. By the 2010s, this camp began advocating “sovereignty,” or “extending Israeli law” over parts of the West Bank—meaning annexing it to Israel.

Read More: Israeli Is Bleeding From Within. Restoring the Peace Shouldn’t Mean a Return to the Way We Lived

Annexation would become the next right-wing idea to move from the fringes to the party in power, Likud. By 2019 numerous Likud figures already supported the idea; including Netanyahu. In 2020 the Trump plan would make the aim of annexation official.

By this time, Netanyahu had ushered nationalist populist politics to Israel—a different kind of right. The emerging populist right still campaigned for settlements and annexation; but rebelled also against any political or legal constraints on their plans. The new right took on democracy itself.

Right-wing activists—but also politicians—denounced the left-wing in Israel as enemies and traitors. Netanyahu’s governments passed legislation targeting the Arab minority, left-wing civil society, migrants, political protest. Populist right-wingers, from politicians to columnists, talk of restoring sovereignty to the people, by which they meant unrestrained majority rule, taking it back from unelected elites or bureaucrats. Demonstrators against the Supreme Court have chanted slogans such as “the people are the sovereign,” or called to end the “dictatorship of the High Court.”

The signature campaign of Israel’s newer right has been to weaken the Israeli judicial branch. Ayelet Shaked, the justice minister from 2015 to 2019, worked vigorously to constrain the Supreme Court, override judicial review, and deepen the image of the judiciary as an elite cabal that tramples the will of the people. For a time, her party was called the New Right.

Fewer legal constraints would give Israel a freer hand to expand its control in the West Bank. For example, in 2017 the Knesset passed law intended to legalize Israeli settlements on private Palestinian land; in 2020 the court struck it down. If the right-wing had its way, the court wouldn’t have that power at all.

Demonization of the courts required judges to get security protection to protect themselves from death threats, anonymous warning letters, and small vandalization presumably by inflamed citizens. As Netanyahu’s corruption investigations closed in, he personally lashed out at the state prosecutor, the police, and the attorney general too. Some of the threats are likely from Netanyahu’s supporters who believe he is the victim of a political-legal witch hunt.

Israelis seem worried; optimism about the future of democratic governance fell 17 points between 2019 and 2021—and with good reason.

This new form of populist, semi-authoritarian right is the political camp that has backed Netanyahu, along with ultra-orthodox parties. If the war pushes either additional coalition partners or voters to favor him, the next Netanyahu government will be more extreme than any before. The Jewish supremacist Religious Zionist party, heirs to the racist Kahanist movement of the 1980s, would be key coalition members. Israel’s chief of police reportedly said that one of its leaders, Itamar Ben Gvir had sparked the riots within Israel last week with his incitement. It’s conceivable that another figure from the party, the rabid anti-judiciary crusader Simcha Rothman, would be justice minister. No court would block a law legalizing settlements ever again, and incitement could make Israel’s internal strife worse.

But in 2021, two right-wing parties also broke from Netanyahu’s camp. These challengers, Gideon Saar and Avigdor Lieberman, represent the old nationalist, security-oriented right. They are less committed to undermining institutions and attacking the judiciary. Gideon Saar speaks of judicial reform, but has avoided the aggressive tone that is the hallmark, or dog-whistle, of the newer right-wing. Should they form a coalition alongside center, left-wing and Arab parties the resulting policies might be more balanced, though this option appears to be receding. Such a government might broadly preserve judicial independence, rein in racist jingoism of Netanyahu’s political cronies, and perhaps advance separation of religion and state, since most members of such a coalition would be secular.

Either way, both coalition options will be anchored by the right wing, new or old. These parties will do everything possible to preserve Israel’s dominance in the regional conflict. They share the aversion to concessions and rejection of a Palestinian state. And without a final status political agreement, Israel and Palestine can look forward to future rounds of war. 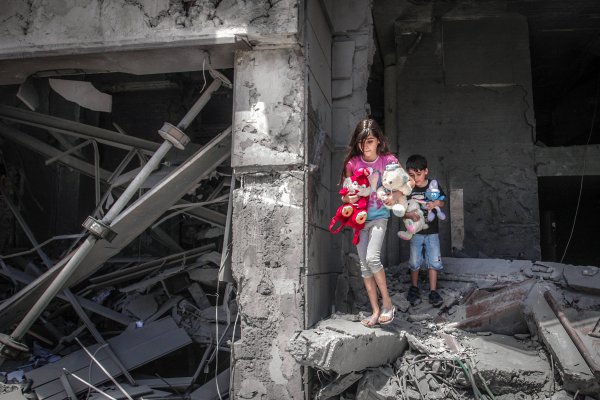 What It's Like Raising Children in Gaza During Bombardments
Next Up: Editor's Pick