I've Tried to Keep My Kids Safe Through 3 Bombardments of Gaza. It's Never Been Like This Before

Ideas
By  Fadi Abu Shammala
Shammala is the outreach associate in Gaza for Just Vision, and the executive director of the General Union of Cultural Centers. His Twitter handle is @FadiAbuShammala

I don’t sleep at night in wartime. I sit, vigilant, next to Ali, Karam and Adam, their small bodies sprawled, limbs interlocking, next to their mother Safa on two foam mats. This way, when they are yanked from their sleep by the thunderous explosion accompanying the obliteration of a nearby building, their Baba is already by their side, ready to comfort them without a moment’s delay. My kids won’t feel alone, for even a fraction of a second.

When I write this it is the 10th straight day that Gaza has been under bombardment from Israeli warplanes. The current escalation began in the East Jerusalem neighborhood of Sheikh Jarrah, where several Palestinian families faced a since postponed Israeli court date on their expulsion from their homes. The crisis heightened on Monday, May 10, when in response to protests the Israeli police stormed Al Aqsa Mosque, injuring hundreds of Palestinian worshippers. Then Hamas militants in Gaza retaliated by firing rockets at Israel. Israeli airstrikes on Gaza followed and have been continuing since. At least 219 Palestinians, including 63 children and 12 Israelis have been killed in the last ten days. Fear permeates every inch of Gaza City.

This is not Safa’s and my first time parenting during a bombardment. Ali, at 10 years, is living through his third war. It’s 7-year-old Karam’s second. Only 3-year-old Adam is new to this experience. Each assault we face, I utilize lessons from the previous ones to help my family survive.

When the first Israeli missiles started striking Gaza City on May 10, Safa and I sprang into action. She pulled out the empty Coke bottles we had squirreled away—about 25 in total, and I filled them with water. If shrapnel or tank fire pierced the plastic water tank on the roof of the apartment building, we would have water to drink and cook with for a few days.

The author with his three sons in Gaza.
Courtesy Fadi Abu Shammala

Safa and I had already ascertained the safest place in the apartment to withstand a bombardment after we moved in last year. We wanted to keep the kids far from windows which can shatter, shards slicing their skin, and also away from the heavy front door, which can be blasted off its hinges and crush them. Yet, the only windowless place in our apartment is in front of the door. Safa and I settled on the living room, in the corner furthest from its sole window—safer, at least, than the bedrooms which have two windows.

Our beds don’t fit in the living room, so Safa and I prepared two foam mats, lying them side by side and grabbing the kids’ pillows and SpongeBob SquarePants blankets. Safa tucked her prayer robe under her own pillow. This way, if we have to evacuate in the middle of the night, she can slip it over her nightgown before heading out to the streets. “Habibti (beloved one), your life is more important than worrying about modesty!” I try to tell her, but she just lifted her eyebrows at me with an indulgent half-smile that said: my husband, the non-believer.

Read More: Israel-Palestine Is a State of Permanent Conflict Punctuated by Periodic Carnage

In the morning, after breakfast, my usually rambunctious kids would know to speak in hushed voices as their Baba stretched out on the mats—it would be my turn to catch a few hours of sleep. The rest of the day, we sit together in the living room, the kids too frightened to play, Safa and I re-assuring the boys that if one of us has to leave the room to use the bathroom, the other will still be right by their side. If missile strikes do start, I often try to take my family downstairs, joining our neighbors on the ground floor of the apartment building, knowing that when Israeli bombs drop on high rises, the only survivors (if any) are usually those on the ground floor. This is our bombardment routine.

I was keeping watch over my sleeping family in this way at 6 a.m. last Thursday when explosions began rocking Gaza City; the missile strikes came so fast and furiously during the approximately three-minute assault, there was no opportunity to run to the ground floor. I have lived through three previous wars, parenting my children through those terrifying times. I have never lived through a bombardment such as this.

Within another hour, I would be loading my family into my car to drive to our apartment in Khan Younis, a city in Southern Gaza, where they would at least be safer than in Gaza City. I would grip the steering wheel as I passed government buildings or police stations that could be potential targets at any moment, resisting my instinct to speed down the eerily deserted streets, knowing that speeding itself could turn my family into a target. A few hours later, I would be back in Gaza City, where I have access to better electricity and internet upon which my work depends, answering a call from Safa who will tell me with relief, “Fadi, the kids are playing.”

But first, I had to get my kids through those three endless minutes.

As the first missiles exploded, shaking our apartment, Karam immediately screamed and burst into tears. Ali’s face darkened with anger; I saw him choke back his impulse to cry. Adam looked around, confused, then clung to Safa and began wailing. We huddled together, Safa and I wrapping our arms around the boys as missile after missile slammed relentlessly into buildings around us.

“Scream, yell!” I shouted to the boys, hoping they could hear me over the explosions. “Curse the planes, the pilots!” If I could get my kids to shout, they would have some way to release their fear. More importantly, shouting would ensure that they’re remembering to breath, and that the pressure from the bombings would not build inside their heads. But Ali, Karam and Adam were too terrified to shout. They just looked at me with eyes pleading to make it stop. Waiting for me to do something to stop the bombing, to protect them.

Harder than figuring out how to meet my kids’ physical needs, worse even than having to make the split-second decision: do we stay in a building which could be bombed at any moment, or do I take my kids out on the street, where we may also be killed?–was Ali, Karam and Adam’s eyes, staring up at me.

“You are our hero, Baba,” their eyes said. “We know you can make this stop.”

Baba can fill bottles with water, stay up all night next to them, tuck a SpongeBob SquarePants blanket back around Adam as he kicks it off in his restless sleep, drive them to another city (which may very well be the next site of attack), try to disguise the shaking in his voice so that his kids don’t realize how terrified he is as well.

I can even implore parents in the U.S. to call on their elected leaders to stop unconditionally funding the country who is dropping those missiles.

But no matter how much I have learned through assault after assault on the Gaza Strip, the agonizing truth is laid bare in their pleading eyes: Baba cannot make this stop. I can do nothing to keep my children safe. 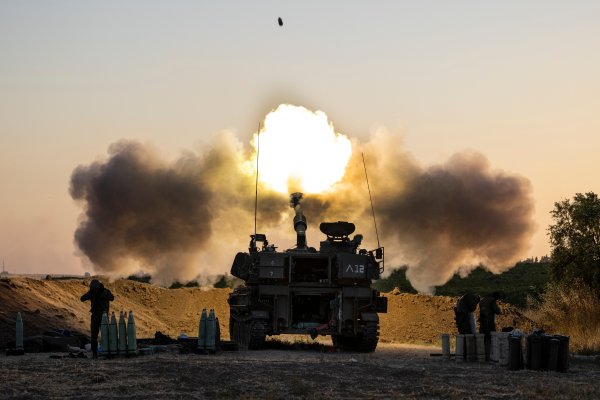 Israel Unleashes Strikes After Vowing to Press on in Gaza
Next Up: Editor's Pick