Where Is Alibaba Founder Jack Ma? What the Saga of One of the World's Richest Men Reveals About China Under Xi Jinping

The response was as swift as it was resolute.

On Oct. 24, Jack Ma, the man behind China’s e-commerce behemoth Alibaba, gave a speech in Shanghai at the Bund Summit, a gathering billed as a “an open, pragmatic and internationally influential financial high-end communication platform.” In such a setting, 56-year-old Ma probably felt entitled to share a few insights from a career that has seen him take Alibaba from a company of less than 20 people—started in his flat in the coastal city of Hangzhou in 1999—to a tech giant that pulled in $71.985 billion in revenue in the fiscal year ending Mar. 31, 2020.

According to an English transcript published by Hong Kong’s Apple Daily newspaper, Ma, who is personally worth $48.2 billion, hedged his speech carefully. He described himself as “a somewhat retired man … sharing the non-professional views of a non-professional” and conceded that his ideas might be “immature, inaccurate or even laughable.” Politely, he threw in a couple of quotes from China’s strongman President Xi Jinping. But as he began inviting the audience—described by Reuters as “the great and the good of China’s financial, regulatory and political establishment”—to consider the need for reform of the country’s financial system, he crossed a line.

He obliquely chided Chinese regulators for stifling innovation, and said that Chinese banks suffered from a “pawnshop mentality” given that banks, like the informal lenders of yore, still relied on a system of “pledges and collateral.” This wasn’t all bad, Ma granted. “In the old days,” he pointed out, “a pawnshop was an advanced idea. Had it not been for innovations such as pledges and collateral, there would be no financial institutions today, and the Chinese economy would not have developed over the past 40 years to such a point now.”

But the listening cadres were infuriated. On Nov. 2, Ma was summoned by Chinese authorities for questioning. The next day, the $37 billion IPO of Alibaba’s fintech arm Ant Financial—touted as a record-breaking offering—was nixed by China’s securities watchdog despite it earlier having received a green light. By late December, regulators had instructed Ant Group to restructure its operations to adhere to new anti-monopoly rules, shaving billions off its valuation.

Then, late last week, Ma was replaced by another Alibaba executive for the televised final episode of a business talent contest he had been helming, with his picture scrubbed from the gallery of judges. Ma has now not been seen in public for at least two months. An Alibaba spokeswoman declined to comment on his whereabouts when contacted by TIME.

Jack Ma (R), founder and executive chairman of Alibaba Group, and then President-elect Donald Trump pose for the media after their meeting at Trump Tower January 9, 2017.
TIMOTHY A. CLARY/AFP via Getty Images

How Jack Ma earned the displeasure of the CCP

If Ma has indeed fallen from favor, then he has tumbled a long way. Being something of a global business celebrity, he was tacitly entrusted by the Chinese Communist Party (CCP) to project a modern, go-ahead image for the country’s entrepreneurs. Official policy visions like Made in China 2025 and China Standards 2035, which seek to write the rules of next-generation trade and technology, read like chapters from the play book of a man whose Ant Financial claims to have over 1.3 billion users of its Alipay mobile payment service around the globe.

Yet it’s clear that the CCP under President Xi will not countenance any challenge to its authority. Given a slowing Chinese economy and mounting geopolitical headwinds, Beijing is nervous about systematic financial risks and rising debt. This is no time to be calling, as Ma did, for a loosening of the system. And just as seemingly unassailable titans of real estate, finance and show-biz previously discovered, China’s tech champion is learning that loyalty comes first in Xi’s China. “There is no so-called [Ma] era,” read a recent headline in the CCP mouthpiece People’s Daily, “but only an era that has [Ma] in it.”

Ma used to be thought untouchable. Beloved as a self-made tech mogul who didn’t even know how to code, he delighted Chinese audiences with tales of repeated rejection. (When KFC opened a store years ago in his native Hangzhou, Ma says he was the only applicant not to be hired.) Yet a fearsome work ethic, and a gift for reading the trends of the digital economy, propelled this former English teacher into being China’s richest man. A party member who regularly appeared alongside China’s top leaders, Ma even became a sort of unofficial ambassador, meeting then President-elect Donald Trump in January 2017, during which he promised to bring a million jobs to the U.S. “Jack and I are going to do some great things,” Trump told reporters at the time.

Ma assumed the limelight with relish, performing in rock concerts, dressing as Michael Jackson, and starring in a kung fu movie. But ostentation is anathema to China’s drab apparatchiks and may well have led authorities to guide public opinion against him. Ma’s defense of China’s strict “996” work culture—9am to 9pm, six days a week—led some to decry him as an “capitalist bloodsucker” and quote Marx in rebuke.

“An outstanding people’s billionaire like Jack Ma will definitely be hung from the lamppost,” one commentator wrote in a post that was read over 100,000 times on WeChat and liked 122,000 times on China’s Twitter-like platform Weibo. Han Fuling, a professor at Beijing’s Central University of Finance and Economics, wrote on Weibo that Ma’s opinions “were full of ignorance and arrogance about finance!”

Officially, at least, Ma had stepped down as Alibaba’s chairman in October and was ostensibly dedicating himself to philanthropy. Following the coronavirus pandemic, his Jack Ma Foundation sent PPE to 150 countries, including 500,000 testing kits and a million masks to the U.S., stating “we join hands with Americans in these difficult times.” Other projects include fostering education in China and entrepreneurship across Africa.

Perhaps Ma’s charitable refocus led him to miss the hardening tenor of government policy. Just a month before his Shanghai speech, the CCP publicized new guidelines on how private enterprises are to help the Chinese state now that “risks and challenges have increased significantly” from the expanded private economy. Of course, this runs counter to the repeated and pained efforts by Chinese-owned tech firms such as Huawei, Tencent, TikTok and Alibaba to portray themselves as independent of government control in the face of mounting U.S. pressure. Persistent reports suggesting that Ant Financial might be forced to pass a large chunk of shares to the state could likewise torpedo its global expansion goals.

“The government is reminding companies that, at the end of the day, we’re the ones who make the regulations, we’re the ones who issue the licenses,” says Mark Natkin, founder of Beijing-based IT research firm Marbridge Consulting. “And if you forget, then you may find an entire area of your business doesn’t get licensed, or your IPO gets halted, or whatever we need to do just to make sure you know who’s the parent and who’s the child.”

It’s a precarious tightrope that risks not only casting a pall over investor confidence but also undermining the willingness of entrepreneurs to take risks—especially in the liminal zones of commerce, where the rules are poorly defined but the payoffs may be greatest.

China didn’t have clear regulations on third-party payments services when Ma first launched Alipay, for example, and the risks of meddling in financial services were plain to him. “If someone has to go to jail, I’ll go,” Ma brazenly told colleagues at the time.

In Xi’s China, Ma may live to regret those words. 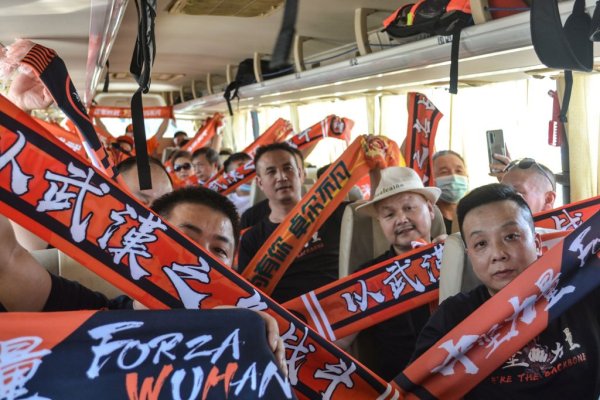 Wuhan Finds Redemption in Soccer
Next Up: Editor's Pick