Tokyo Olympics Games Torch Relay audience seen wearing facemasks as a precaution against the spread of covid-19 take photos with their smartphones as a torch bearer shows the torch before the run on April 7, 2021.
Jinhee Lee—SOPA Images/LightRocket/Getty Images
By Amy Gunia

Eight people who were involved in the the torch relay for the Tokyo Olympics have tested positive for COVID-19—the latest sign of trouble for Japan as it both struggles with a spike in infections and prepares for the Games this summer.

More than 70% of people in Japan want the Olympics, which begin July 23, to be canceled or postponed, according to an April poll by Kyodo News. Runners of the relay, which began its journey to Tokyo on March 25 in Fukushima, have faced heckling and protests.

The Japanese government, however, insists that the Games will go ahead following their delay in 2020 due to the pandemic. COVID-19 protocols released last month rely on frequent testing and isolation bubbles for athletes and coaches, but not strict quarantines or vaccinations. Fans from abroad have been banned, and organizers are weighing whether to bar Japanese spectators, as well.

On Sunday, the country reported 5,900 new infections, and the number of COVID-19 patients with severe symptoms hit a record of 1,050 people. Japan last month declared a state of emergency for Tokyo, Osaka and other areas in an attempt to contain a fourth wave of coronavirus. Japan’s sluggish vaccination rate, one of the slowest among wealthy nations, isn’t helping. Less than 2% of the population has had at least one dose.

Read More: Will Japan’s Low Immunization Rate Pose a Problem for the Olympics?

The country of 126 million people has recored more than 600,000 cases of the coronavirus, according to the Johns Hopkins University virus tracker. About 10,000 people have died. Despite the spike, infection rates remain far below those of the U.S. and Europe.

Those infected as part of the Olympic torch relay helped with traffic control and wore masks, according to local media. They had worked in the cities of Amami and Kirishima in Kagoshima prefecture, where the relay passed through on April 27. Two organizers who earlier helped with the relay on the island of Shikoku have also tested positive with the virus, including a police officer who helped direct traffic.

The torch relay has been scaled back in several locations as it winds its way across the country. Authorities in the western city of Osaka, a crowded metropolis, cancelled the public street route through the city and held it at a park without spectators. 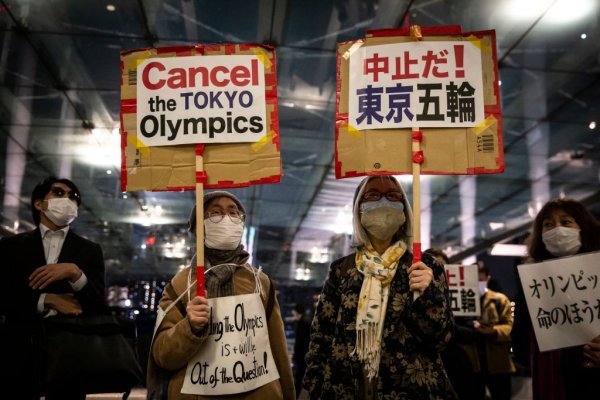