Will Japan's Low Immunization Rate Pose a Problem for the Olympics?

Demonstrators protest against the Tokyo Olympics outside the building of the Tokyo Organising Committee of the Olympic and Paralympic Games on March 25, 2021 in Tokyo, Japan.
Yuichi Yamazaki/Getty Images
By Charlie Campbell / Shanghai

There are less than 100 days to go before the Tokyo Olympics and the torch relay is busy crisscrossing all of Japan’s 47 prefectures. But far from building excitement for the delayed 2020 Games, the flame is sparking anxiety about proceeding with the tournament amid the COVID-19 pandemic. Torch runners are being heckled by protesters.

“Japanese people are generally cheerful, kind and polite,” says Mieko Nakabayashi, a former lawmaker and current professor at Waseda University’s School of Social Sciences in Tokyo. “But people are frustrated about the COVID situation and some don’t feel they have another place to express that.” She says a close friend of his, chosen to be a torchbearer, was among those verbally abused.

It doesn’t help, of course, that Japan is in the middle of a fourth wave of COVID-19, with 4,111 new cases reported Sunday. (Globally, COVID-19 deaths recently breached 3 million.)

Fears are compounded by a vaccination rate of less than 1% across Japan’s population, which is the world’s oldest, with 28% of Japanese aged 65 or above. Despite foreign fans being banned from the Games, and strict health protocols in place for athletes and officials due to attend, the potential for the event to be a super spreader isn’t lost on anyone.

“I’m very frightened, very concerned,” says Prof. Robert Booy, an infectious diseases expert at the University of Sydney. “If the older population suddenly gets into trouble, there will be a lot of hospital admissions and deaths.”

The reasons for Japan’s low immunization rate are complex but reflected across the Asia-Pacific region, where many of the nations that controlled the pandemic best are falling behind in the race to vaccinate, potentially undoing early gains and stalling economic recoveries. New Zealand also has less than 1% of its people vaccinated. Australia and South Korea fare little better with under 3%. This compares to 48% in the U.K. and 25% in the U.S. (although both of those countries admittedly suffered devastating outbreaks, with the world’s sixth highest and highest case numbers respectively).

“It’s problematic, as the more opportunity the virus gets to circulate, the more potential exists for significant mutations that threaten our existing strategies—including vaccines,” says Adam Kamradt-Scott, a public health specialist with the Georgetown Center for Global Science and Security.

In Japan, an extremely conservative attitude towards vaccine approval compounds the problem. To date, Japan’s government says it has signed purchase agreements for a total of 314 million vaccine doses from Pfizer, AstraZeneca and Moderna—enough to cover its entire population. But only the Pfizer vaccine has so far received local regulatory approval. At this rate, it’s estimated Japan’s population won’t be covered until September, while the Olympics begin on July 23.

Many Japanese are asking why such a technologically advanced economy is unable to produce its own vaccines under license from one of the big pharmaceutical firms, or why emergency approval cannot be granted given the risk posed by the Games.

“The government is very cautious and cannot proceed as quickly as people want,” says Nakabayashi.

Problems with some jabs have also spurred vaccine hesitancy across the region. The rollout of both the AstraZeneca vaccine, for example, was briefly suspended in Indonesia and Thailand, due to the very rare occurrence of blood clots. But despite the risk being comparatively low—women taking the standard oral contraceptive pill for a year have a 1-in-2,000 chance of developing a blood clot compared to the 1-in-200,000 chance of clotting from the AstraZeneca vaccine—the damage to public perception has been done.

The problem, says Booy, is that delaying immunization programs may boost pandemic complacency. Mitigation tactics such as mask-wearing and social distancing appear to be containing the existing variant—to the extent that populations become more casual about their use.

“People become much more lackadaisical, especially young people, because no one’s getting the disease,” he says. But all the while, “the virus is mutating and becoming more transmissible.”

As the Olympics looms nearer, Japan’s own sluggish rollout makes it tricky to insist that visiting athletes and officials are vaccinated when Japan’s own population hasn’t been. Containment efforts will probably have to rely on testing, quarantines and bubbles. Last week, one leading politician even said canceling the Games “remains an option.”

International Olympic Committee president Thomas Bach is due to travel to Tokyo next month to assess preparations. But if the Games do go ahead, it seems fairly certain that the athletes won’t be getting the warmest of welcomes. 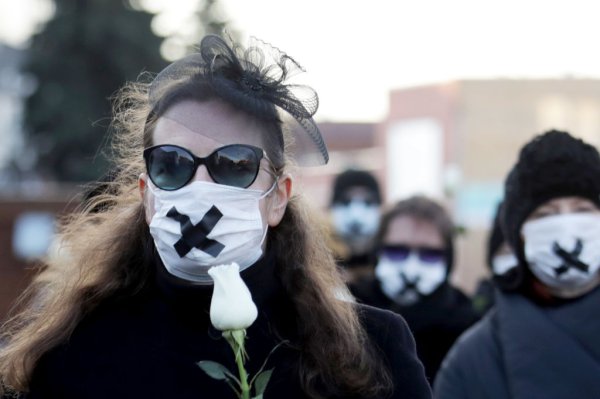