Memoirist Alison Bechdel Is No Longer Trying to Outrun Death

The fate of an author who grew up in a funeral home may be that every book she writes becomes a contemplation of mortality. That certainly seems to be the case for Alison Bechdel, the cartoonist who shot to literary fame with the 2006 graphic memoir Fun Home, named after the family funeral home where she spent her formative years. That book dealt with Bechdel’s coming out during college, the subsequent revelation that her father had had sexual relationships with men, and his untimely death, which Bechdel believes to have been a suicide. Her next book, Are You My Mother?, sought to unpack Bechdel’s complicated relationship with her mom.

“After spending a long time writing these intense family memoirs that were kind of grueling, I thought it would be fun to talk about my exercise life, which has always been the one part of my life that wasn’t conflicted,” she says during a Zoom call from her home in Vermont, chosen in part because of its access to biking trails and cross-country skiing. She pitched The Secret to Superhuman Strength as a humorous account of her lifelong obsession with exercise, but the resultant book is hardly a breezy read: the cartoon version of Bechdel turns to physical activity in an attempt to outrun death in her younger years. Then, after she’s accepted the inevitable, she exercises in an effort to achieve enlightenment.

Bechdel, 60, recently came across a journal entry she wrote when she was 16. “I said, ‘You better still be running when you’re old and gray,'” she says. “It was funny to hear myself speaking to myself across the decades. So I feel like I’ve always been conscious of the problem of aging and death.”

The book also reckons with a more ephemeral threat: creative death. Bechdel chronicled much of gay culture in her 25-year-long syndicated comic strip, Dykes to Watch Out For. She made famous the “Bechdel test,” a simple query that asks if two female characters in a movie talk to each other about something other than a man. She won the MacArthur “genius” grant in 2014. The musical version of Fun Home was a Pulitzer finalist that same year and won five Tony Awards in 2015. It’s now being made into a movie starring Jake Gyllenhaal as Bechdel’s father. Given her phenomenal success, she worries about matching the peaks of her previous work.

For guidance, Bechdel turns to Transcendentalists like Margaret Fuller and Romanticists like William Wordsworth, whose biographies she weaves into Superhuman Strength. These writers also detailed their own exercise in pursuit of inspiration–primarily vigorous walking with other literary giants. “Where does creativity come from? How can I tap into that? Can I engineer it, or does it just somehow descend from the heavens unbidden?” Bechdel asks. “Getting a handle on how they all lived helped me to figure that out a bit for myself.”

She’s particularly interested in Jack Kerouac. Like many a young feminist college student, Bechdel hated the casual misogyny of On the Road. But later in life, she fell in love with another of his works, The Dharma Bums, an autofictional account of his journey up Matterhorn Peak in California with the poet Gary Snyder. In hopes of climbing out of her own creative rut while writing this book, Bechdel persuaded her partner, artist Holly Rae Taylor, to make the same trek on their honeymoon. “When I was younger, I thought he was such a jerk,” she says. “But now it’s interesting to me to see someone attain success and then self-destruct. Now that I’m much older and have had some brushes with success myself, I can see what a challenge that is.”

Shortly before the pandemic, Taylor, who provided the coloring for Superhuman Strength, suggested they cut out meat and reduce their alcohol consumption, a promise they’ve stuck to. But in the book, Kerouac’s drinking serves as a gateway for Bechdel to explore her own struggle with alcohol. “I was really starting to go off the rails once Trump was elected,” she says. “I was drinking a lot, but I also started running more.” On Election Day 2016, she went on a long run to ease her anxiety. “It wiped my mind clean,” she says. “And so I had to keep doing that. I just kept running and running because that was my way of saving myself.”

As a kid, Bechdel fixated on fitness magazines, striving to be as strong as the buff men they featured. In the opening pages of Superhuman Strength, she reckons with what she believes to be her own hypocritical preoccupation with attaining brute strength: “This fantasy of physical fitness is for fascists! I’m a feminist for *@#&’s sake.”

In retrospect, she realizes that part of the appeal was the androgynous workout clothes, especially tantalizing to a kid not allowed to get sneakers because they were considered unladylike. “I grew up in the times when they told girls they were physically incapable of doing push-ups,” she says. “I grew up before there was such a thing as a sports bra. The sports bra alone has revolutionized so much in our culture.”

Bechdel earned a black belt in a feminist martial-arts class in the 1980s, but quit after a guy groped her on the New York City subway, and she realized that she couldn’t follow through on her strikes. The man returned her half-hearted attack with a punch to her face, and she had a black eye for weeks. “I think about that moment a lot,” she says. “It was an important lesson in nonviolence. That’s not how you solve things.”

Since then, Bechdel has tried just about every exercise fad, from indoor cycling to a regrettable stint with the “Insanity” DVDs that were all the rage in the 2000s. She’s bought straps that suspend her from the ceiling as she practices yoga. She’s skied, downhill and cross-country. In hotels on book tours, she still does the “Scientific 7-Minute Workout” the New York Times published in 2013. She began this latest book just as her age began to hamper her vigorous workouts. “I was starting to lose strength, which was very disturbing,” she says.

But in many ways, the mental benefits have begun to outweigh the physical ones. “Through repetitive, intense aerobic activity, I can get out of my busy, annoying mind,” Bechdel says. When she goes for a run, she does so without headphones. If she has an idea while on the trail, she’ll switch her wedding band to her other hand in hopes that it’ll remind her she had some idea for something. It’s a trick she picked up in some book by a runner, and it works only some of the time.

Bechdel references these metaphysical moments, or “aerobic inebriation,” throughout her book. With these revelations, the vision of the individualistic strongman she coveted as a little girl has faded away: “I realized it wasn’t so much I wanted to be physically stronger as that I wanted to be not dependent on other people. I’ve always had this fantasy of self-sufficiency, just given my own family and upbringing. I am learning no one can be self-sufficient. We’re just part of the same big human organism, which I think the pandemic has illustrated quite profoundly. We’re all vulnerable, as much as we would like to think we’re not.”

“I was just looking at Marjorie Taylor Greene’s Instagram, and she’s doing these crazy overhead presses with really heavy weights saying, ‘This is my COVID protection.'” Bechdel rolls her eyes. “That’s not what my book is about.” 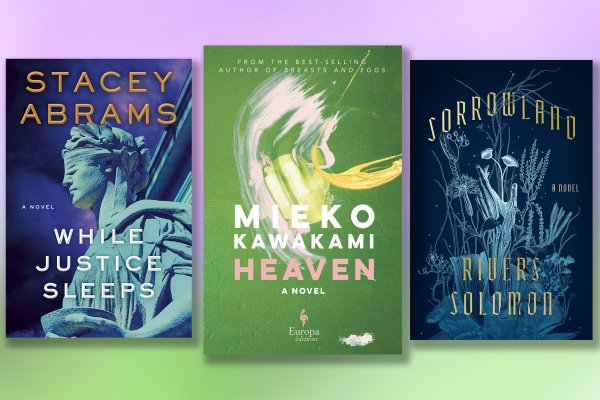 The Best New Books to Read in May 2021
Next Up: Editor's Pick