Alison Bechdel at a rehearsal as cast members of the musical of her memoir, "Fun Home", prepare for a performance of selected songs to be delivered in support of protesters at the College of Charleston after proposed state budget cuts were approved in response to "Fun Home" being offerred as summer reading at the College of Charleston, at the Meminger Auditorium on April 21, 2014 in Charleston, SC.
The Washington Post/Getty Images
By Megan Gibson

The MacArthur Foundation has announced the 21 recipients of this year’s fellowships, often referred to as the “genius grant,” and among the honorees is cartoonist and graphic artist Alison Bechdel, who is known for her graphic memoirs Fun Home: A Family Tragicomic and Are You My Mother?

The prestigious fellowships, which are awarded based on achievement and potential, come with a stipend of $625,000, spread over five years, which can be spent in any way the honorees see fit.

Bechdel, who is currently at an artist residency in Italy, told the Los Angeles Times that when she received the call announcing she won, “It was crazy.” She added, “It was a little garbled, then I heard the person on the other end say the words MacArthur Foundation and the world started spinning.” Bechdel is only the second graphic novelist to win the fellowship after Ben Katchor won in 2000.

Even those who aren’t familiar with her cartoons or graphic memoirs have likely heard of the 54-year-old Bechdel, whose work has inadvertently upended the way we think about movies with her now famous Bechdel Test. The test, which the cartoonist coined in 1985 in a strip called “The Rule,” asks three questions of a film as a way to demonstrate the very basic level at which gender biases operate in movies: 1) Does the movie have two female characters?; 2) Do they speak to each other?; 3) Do they speak about something other than a man? Sadly, many movies — even today, almost 20 years after the test was created — don’t pass. Yet the very fact that the Bechdel Test has become a mainstream concept, rather than a niche, radical feminist idea, proves how much influence it has had.

Out of the 21 prizes awarded, eight other women were also honored. The New York Times reports that the oldest fellow this year is 71-year-old Pamela O. Long, a historian of science and technology in Washington, and the youngest is 32-year-old Danielle S. Bassett, a physicist at the University of Pennsylvania.

When asked about the stipend, Bechdel told the LA Times, “It will give me a lot of security that I don’t have. Pay off some debts, save for retirement — really boring stuff.” But she also added that it will allow her to “take some risks, do something new — to really plunge into my work. It’s an incredible gift.” 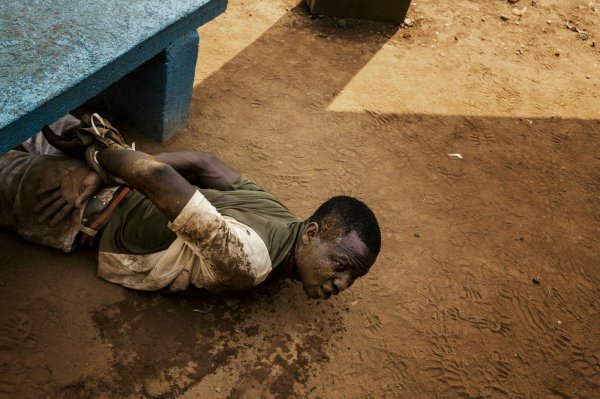 Top Photographers Win $130,000 Worth of Grants
Next Up: Editor's Pick