In His Speech to Congress, Joe Biden Sets Out a Vision for ‘Competition, Not Conflict’ With China

It was a speech heavy on domestic policy, detailing ambitious plans to revamp American infrastructure, education, jobs and healthcare. But at the heart of U.S. President Joe Biden’s first address to Congress late Wednesday lay a theme common with his mercurial predecessor: competition with China to “win the 21st century.”

In a departure from prepared remarks on the eve of his first 100 days in office, Biden felt it necessary to spell out that Chinese President Xi Jinping “is deadly earnest on [China] becoming the most significant, consequential nation in the world. He and others, autocrats, think that democracy can’t compete in the 21st century.”

Referencing a two-hour telephone conversation he had with China’s strongman on the eve of the Lunar New Year holiday in February, Biden said, “I told him that we welcome the competition — and that we are not looking for conflict. But I made absolutely clear that I will defend American interests across the board.”

Biden’s tone was far less acrimonious than that of Donald Trump — who went conspicuously unmentioned throughout the 65-minute address to a half-empty Capitol — but left onlookers in no doubt that checking Beijing’s rise will dominate U.S. foreign policy under the new administration.

“Decades ago, we used to invest 2% of our GDP on research and development,” said Biden. “Today, we spend less than 1%. China and other countries are closing in fast.”

In a departure from the “whole of society” competition that characterized bilateral relations under Trump, the president said that he would seek ways to work with China where interests aligned. In an easing of COVID-19 restrictions Monday, U.S. officials announced that Chinese students due to attend American universities after July 31 were free to enter the country.

Yet there was no mention of an end to the trade war that has so far cost tens of billions of dollars and up to 245,000 American jobs, according to one study. Far from scrapping the tariffs, Biden championed his own nativist economic policy: “American tax dollars are going to be used to buy American products made in America that create American jobs.”

“There’s no reason the blades for wind turbines can’t be built in Pittsburgh instead of Beijing,” he added. “No reason why American workers can’t lead the world in the production of electric vehicles and batteries.”

When it comes to human rights and democratic principles, Biden also insisted that he would hold China to account. Last month, Secretary of State Antony Blinken labeled Beijing’s treatment of its Uighur Muslim minority “genocide,” as the previous administration did.

“I told [Xi] what I’ve said to many world leaders — that America won’t back away from our commitment to human rights and fundamental freedoms,” said Biden. “No responsible American president can remain silent when basic human rights are violated. A president has to represent the essence of our country.”

Containers are seen stacked at a port in Qingdao in China's eastern Shandong province on January 14, 2020. China's trade surplus with the United States narrowed in 2019 as the world's two biggest economies exchanged punitive tariffs in a bruising trade war
STR/AFP via Getty Images

Reactions to Biden’s Speech in China

Biden received a mixed reception in the world’s most populous nation, where some saw his preoccupation with the country as an attempt to intimidate. “Chinese leaders have never talked about China-U.S. competition,” tweeted Hu Xijin, the strident editor of Communist Party (CCP) mouthpiece Global Times. “It is you and your team who are talking about China every day. It seems that you have no idea what you should do if [you] don’t compare [yourself] with China. Pity.”

Wrote one cynical user on Weibo, the giant Chinese messaging platform, “On the 100th day of Biden’s arrival in the White House, my nostalgia for Trump is overwhelming.”

Said another: “Biden is tougher and more insidious with China than Trump. Trump is all explicit, Biden is more conspiratorial.”

But Trump’s full-throated attacks — especially his referring to COVID-19 as the “China Virus” and “Kung Flu” — made him deeply unpopular in China and contributed to the unleashing of Beijing’s belligerent “wolf warrior” diplomacy in response.

“You can’t just allow this kind of hostility or racism, to push China against the wall, so that people believe that the Chinese government is cornered without any way to hit back,” Victor Gao, director of the China National Association of International Studies, tells TIME. “Whatever differences there are between China and the United States, we need to have leadership and statesmanship with mature views of both sides to engage with each other.”

Trump’s animosity also enabled the CCP leadership to forge stronger cohesion within Chinese society, casting America as the common enemy. On a visit to Guanxi province last week, Xi visited the site of a key battle during the fabled “Long March” of China’s Civil War and said the fight should provide inspiration for overcoming current tribulations. “No matter how big our difficulties, we should think of the Red Army’s Long March and the bloody Xiang River Battle,” he said.

Many in China hope that Biden’s more statesmanlike approach will lower the geopolitical temperature. On Friday, Foreign Minister Wang Yi delivered a speech to the U.S. Council on Foreign Relations in which he said China would “welcome the Biden administration to return to multilateralism” and called on the White House to treat his nation fairly.

“The key is whether the United States can accept the peaceful rise of a major country with a different social system, history, and culture,” said Wang. “It is undemocratic … to label China as ‘authoritarian’ or a ‘dictatorship’ simply because China’s democracy takes a different form than that of the United States.”

But on this point, as with many, it was clear Wednesday that the two sides remain at odds. Biden declared that he wanted to be “leading with our allies” to preserve the liberal democratic order. “We will maintain a strong military presence in the Indo-Pacific just as we do with NATO in Europe — not to start conflict, but to prevent conflict,” he said.

The president added: “The autocrats will not win the future.” 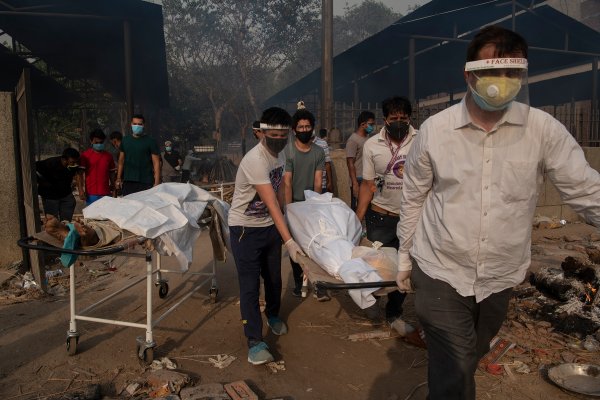 How India’s COVID-19 Crisis Spiraled Out of Control
Next Up: Editor's Pick