President Joe Biden has attended dozens of presidential addresses to Congress since he first came to Washington in 1973. But after nearly half a century of being an audience member, he finally got the speaking slot Wednesday night to lay out his own vision for the country.

“America is on the move again,” he said during his roughly hour-long remarks. “Turning peril into possibility. Crisis into opportunity. Setback into strength.”

Biden seized the opportunity to boast about his Administration’s accomplishments, highlighting how Americans have received over 220 million shots of the COVID-19 vaccines in his first 100 days in office, which he called “one of the greatest logistical achievements this country has ever seen.”

Like the rest of Biden’s presidential milestones, this one was altered because of the pandemic. The audience in the House chamber, usually more than 1,000 people, including all members of Congress and multiple Supreme Court justices, was limited to just 200. Since most of Biden’s Cabinet was watching on television— just Secretary of Defense Lloyd Austin and Secretary of State Antony Blinken attended in person— there was no need for the usual “designated survivor.” Chief Justice John Roberts was the sole representative for the judicial branch, and the handful of Democratic Senators who attended had their names drawn by lottery. Attendees were seated apart from each other to accommodate social distancing, with a maximum of three people in one row.

Still, Biden’s speech, which he had spent weeks honing with director of speechwriting Vinay Reddy and longtime advisor Mike Donilon, illuminated how the very catastrophe that kept him from delivering to a full audience was also shaping his presidential agenda. His speech largely focused on economic priorities, and he outlined the American Families Plan, his $1.8 trillion proposal to raise taxes on the wealthy to pay for affordable childcare, paid leave, and access to education. If implemented, the plan would offer universal preschool for three- and four-year-olds and two years of free community college, and create a national paid leave program. This proposal is the third prong of Biden’s $6 trillion plan to bolster the post-pandemic economy by combating inequality and climate change. He signed the first part, the $1.9 trillion American Rescue Plan, into law on March 11. In the past month, has also called for a $2 trillion bill that would create millions of jobs and repair the country’s infrastructure, hailing it in his address to Congress as a “blue-collar blueprint to build America.”

In total, these proposals would be the biggest investment in clean energy in U.S. history and the largest federal investment in the U.S. economy since Lyndon Johnson’s Great Society.

Biden has calculated he has the political capital to push these plans through in a narrowly divided Congress because the pandemic’s exacerbation of societal inequities has increased Americans’ need and desire for federal intervention. A Gallup poll from September 2020 found that 54 percent of Americans wanted government to do more to address the country’s problems, a 7 percentage point increase from the prior year. 56 percent of independents held that view, the highest number since 2001. Both the infrastructure plan and the American Families Plan amassed over 60 percent support, according to a Monmouth poll released April 26.

“This is one of those rare opportunities in American history for Presidents to achieve big things,” says Timothy Naftali, former director of the federal Richard Nixon Presidential Library and a historian at New York University. “They don’t happen that often and they usually happen during a moment of crisis when weakness on the part of the other party has created a political vacuum. And into that vacuum Joe Biden has stepped.”

Biden urged Congress to act on police reform in time for the one year anniversary of George Floyd’s murder at the hands of former Minneapolis police officer Derek Chauvin. “We need to work together to find a consensus,” he said. “We have to come together. To rebuild trust between law enforcement and the people they serve. To root out systemic racism in our criminal justice system.” House Democrats have passed the George Floyd Justice in Policing Act, which includes provisions that would establish a national standard to operate police departments, require law enforcement to collect data on police encounters, and put a federal ban on chokeholds. But the bill would require at least ten Republican votes in the Senate, and its fate is uncertain.

Biden signaled he was open to compromise on immigration— the issue that has garnered his lowest approval ratings as the number of illegal border crossings reached a two decade high in March and the system struggled to handle an influx of unaccompanied minors. Biden said lawmakers should pass the immigration reform bill he sent to Congress on his first day in office, which includes a pathway to citizenship for 11 million undocumented immigrants. But he said both parties must work together. “If Congress won’t pass my plan, let’s at least pass what we agree on,” he said. He also attempted to reach out to Republicans on infrastructure, after they released their own infrastructure plan as an alternative to his. “We welcome ideas,” he said.

But all of these proposals remain a heavy lift for a narrowly— and bitterly— divided Congress. The last time Congress convened a joint session nearly four months ago, a violent mob stormed the Capitol to try and prevent certification of Biden’s election victory. (Right before his speech, Biden met with the Senate and House Sergeants at Arms, who are responsible for security, and the architect of the Capitol.) Notably, Biden did not call for any filibuster reform during his speech, which would enable him to pass his agenda along party lines.

Biden concluded by invoking the rhetoric of the President he has been reading about since before his inauguration: “In another era when our democracy was tested, Franklin Roosevelt reminded us: In America, we do our part,” Biden said. “That’s all I’m asking. That we all do our part.” 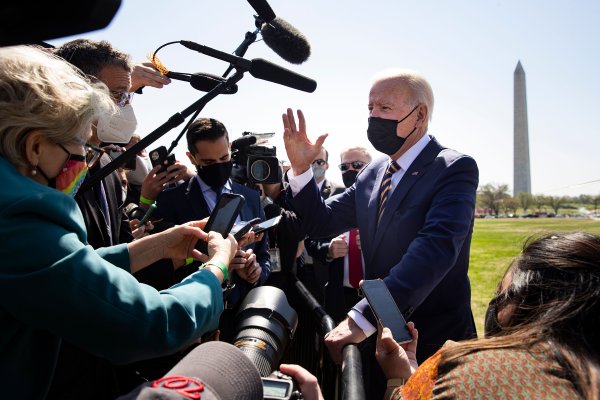 One Hundred Days In, Biden Is Betting on Big Government
Next Up: Editor's Pick