The Troop Withdrawal Won’t Be the End of the U.S. Military Presence in Afghanistan. History Suggests There's a Better Way Forward

When President Biden boldly defied his military advisors and announced on April 14 that the American military presence in Afghanistan will end on Sept. 11, 2021, many Americans took the decision as welcome news of the conclusion of America’s seemingly endless war in the country.

But the devil, as always, was in the details: within days, we learned that though troops will leave, the Pentagon, American spy agencies and American allies will maintain a “less visible” presence in the country. The departure will not include the thousand troops maintained in the country “off the books,” as Pentagon sources told the New York Times, including elite Army Rangers working for both the Pentagon and the CIA. More troops will remain positioned in neighboring countries, and attack planes will be within rapid reach, forewarned of “insurgent fighters” by armed surveillance drones. Civilian contractors may also play a role on the ground.

These measures are meant to assure Americans that Biden still has his eye on “the terrorist threat.” Leaving aside the fact that Americans confront domestic terrorism with much greater frequency than terrorism from abroad, these plans are part of a long history of reluctance to walk back a global imperial presence. That past both demonstrates and assures that a more discreet American presence will be a provocation rather than a source of security.

The British laid the foundation for covert empire in the region from the Mediterranean to Afghanistan. They conquered much of the Middle East from the Ottoman Empire during World War I, when anticolonial sentiment around the world was potent. But since it was no longer politically feasible to annex territories outright as colonies, Britain ruled these new conquests as “mandate territories”—territories judged not yet ready for self-government and in need of tutelage from the victor powers, with the sanction of the new League of Nations. Their administration from the British Colonial Office, however, made the term a rather transparent fig leaf.

Britain’s new subject peoples knew it, too, and rebelled at the imposition of colonial rule. To cope with this anticolonial threat, Britain invented aerial policing as a form of everyday colonial administration, using it first in Mandatory Iraq. Britain’s Royal Air Force (RAF) cheaply and discreetly patrolled and bombarded the country on the calculation that “in countries of this sort…the impersonal drone of an aeroplane…is not so obtrusive as the constant presence…of soldiers.” If it made the infrastructure of empire less visible to Iraqis, this violent regime also eluded the check of Britain’s mass democracy, which was clamoring for oversight of foreign policy at the time. This was the invention of a new kind of covert empire.

But aerial policing provoked rather than quashed Iraqi resistance. So, in 1932, the British resorted to declaring Iraq formally independent and devised even more covert means of maintaining control. In the shadow of an only nominally independent Iraqi government, an assortment of unaccountable British intelligence agencies working with the air force held real administrative power. This covert British presence compromised the legitimacy of the Iraqi government, stoking rebellion, and was decisively ousted with the Iraqi revolution of 1958, which finally sent the RAF home and overthrew the government that had so long tolerated its presence. But two years later, the CIA attempted to assassinate the head of the new Iraqi republic (succeeding in assisting the 1962 coup that brought the Baathists, the party of Saddam Hussein, to power), launching a new era of secret imperialism masterminded by the United States in the context of the Cold War.

It was the empire in India that made control of the Middle East so important to the British. This was also the reason for British interest in Afghanistan, at India’s frontier. There too, after World War I, the British turned to aerial policing. Though Afghanistan was never formally colonized, Britain maintained a discreet semicolonial presence in the country that was continually resisted—the source of a series of Anglo-Afghan wars in the 19th and 20th centuries. There, too, the United States picked up the baton of covert intervention during the Cold War, funding the antecedents of the very forces that American troops have sought to annihilate since 9/11. In 1953, when the Iranian government pushed back against the discreet colonial power Britain exercised over the country through the Anglo-Persian Oil Company, the U.S. partnered with Britain in a covert operation to overthrow that popular democratic government, establishing in its place a brutal collaborating regime that was finally overthrown in the 1979 revolution that created an Islamic republic.

Americans and Britons may have a weak grasp of this history of covert empire, though it shapes their own world too: Domestic security agencies increasingly turned to “techniques of invisible influence and control” learned in the empire, as the radical British historian E. P. Thompson observed. Last year, for example, they used aerial policing to surveil protests against racialized domestic policing in the United States.

But for people in the region, on the other hand, the story of undercover British and American empire is national history and collective memory. It is the source of the constant concern about a Western hand secretly guiding events. The more inconspicuous the British made their presence, the more Iraqis grew justifiably paranoid about the true extent of their independence. Terror lay at the core of covert empire, as British officials openly admitted—and U.S. drone use, echoing the logic of British aerial policing, confirms.

Given the way the War on Terror followed on the heels of the Cold War, which followed on the heels of British imperialism, we are in many ways caught in a dynamic unleashed in 1919 when the British established their colonial presence in these regions. “Exit” strategies designed to appease antiwar or anticolonial domestic opinion in Britain or the United States have repeatedly led, in practice, to continued involvement, just behind the scenes. And greater secrecy has bred precisely the sort of paranoia and resentment that led to our present discontents. There is evidence that, especially against the backdrop of this history, the Obama administration’s sleight of hand in “exiting” from Iraq stoked the anti-American sentiment that fueled ISIS and denied democratic oversight of the lingering covert American presence to the American public. People in Afghanistan as much as in Iraq have always known that there was more to their political existence than met the eye, that there were powers lurking just off-stage. This sense of historic injury fuels the kind of anger that sustains the Taliban.

And so this history matters in how an incomplete exit from Afghanistan in September 2021 will unfold. Biden has helpfully assured that “Bringing our troops home doesn’t mean the end of our relationship with Afghanistan.” But if that ongoing relationship is about covert military support, it will allow the Taliban to continue to claim legitimacy as a nationalist resistance against a local government that it portrays as a puppet of the United States.

History suggests that, rather than maintain a more covert military presence, the United States should evolve a relationship with Afghanistan that eschews control and instead offers moral support to the indigenous efforts against the Taliban. Those who protest that some military presence is necessary to protect Afghani women or ethnic minorities extend the British colonial paradigm of the “white man’s burden.” Moreover, experience shows that such a presence, because it depends on cultivating particular groups, exacerbates rather than soothes inter-group tensions and undermines indigenous struggles. More than protecting Afghani women from Afghani men, the United States might support all Afghans negotiating a postcolonial future by helping to provide much needed resources—delivered through multilateral agencies to avoid colonial influence. The economist and U.N. adviser Jeffrey Sachs said even in 2010, “Afghanistan is in urgent need of the basics for survival…seeds, fertilizer, roads, power, schools, and clinics—much more than it is in the need of another 30,000 troops.”

The announcement of troop withdrawals should not read as an announcement of disengagement and abandonment, as if war were the only way the United States can engage with another part of the world. The United States has also historically offered crucial moral support to struggles against oppression around the world, whether the Indian struggle against British rule or the South African struggle against apartheid, and there is no reason its relations with Afghanistan after September 2021 cannot fit in that tradition.

Priya Satia is Raymond A. Spruance Professor of International History and Professor of History at Stanford University and the author of Empire of Guns: The Violent Making of the Industrial Revolution and the Time’s Monster: How History Makes History, available now from Belknap Press, an Imprint of Harvard University Press. 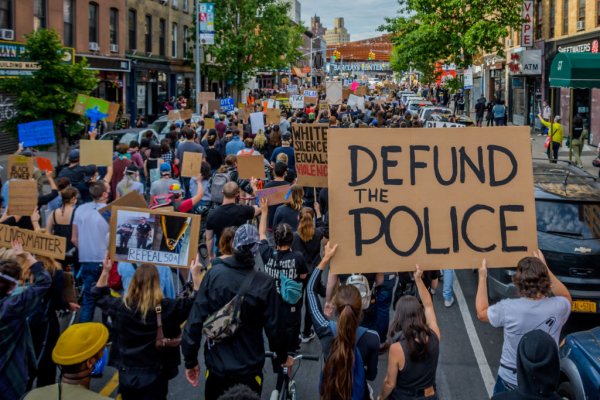 History's Lesson for Activists Who Want to Defund the Police
Next Up: Editor's Pick