While their counterparts in France were locked in stalemate during World War I, British troops protecting oil resources in the Persian Gulf were anything but.

They pushed north against the Ottoman Empire, taking Baghdad in 1917. They routed the Ottomans at Mosul in October 1918. The news of their adventures boosted British morale. And they built an occupation administration as they went, even as they promised the region’s inhabitants imminent freedom.

After the war ended on Nov. 11, 1918, the British broke those promises and incorporated “Iraq” (made up of the Ottoman provinces of Basra, Baghdad, and Mosul) into their empire, along with Palestine and Transjordan. They were unwilling to relinquish a region that had become crucial to imperial land and air routes, and whose potential wealth offered redemption from the losses of the war.

The people who lived there, however, were unwilling to accept that decision quietly.

Iraqis rebelled in 1920, while Britain also faced rebellion in India, Ireland, Egypt and elsewhere. Using the deadly new Royal Air Force, Britain crushed the rebellion in a year. In this they built on wartime use of airpower in Iraq. Baffled by the region’s shifting rivers and deserts, mirages and sandstorms, the British turned to airpower as a panacea for a land where, they felt, “little can be trusted that is seen,” and which they imagined as uniformly flat, despite its mountains, cities, marshes and rolling dunes.

Thus it was that aerial photography and signaling were developed in wartime Iraq. Aircraft also supported the uniquely innovative deception and irregular warfare tactics the British used in the Middle East, which inspired the tactics of World War II. It was in the Middle East that the British invented the aerial trap — bombarding an Ottoman column retreating through a canyon — and the airlift. Most significantly, they realized airpower’s “political possibilities” in disciplining tribes: “[A]n aerial raid with bombs…inspired terror in the Arabs,” noted an official memo.

Postwar Cabinet assessments concluded that airpower had found greatest application in the Middle Eastern theaters of the war; it was there that it had proved its independent military capabilities.

After the 1920-21 rebellion, with the British public clamoring for demobilization, British officials again turned to airpower, now as a means for ruling Iraq. Experts asserted airpower’s particular suitability to overcoming Iraq’s apparent topographical deceptions and recalcitrant population. The RAF would patrol the country, coordinating information from agents on the ground to bomb villages and tribes. When confronted with the reality of Iraq’s topographical diversity, officials merely argued that this made Iraq an ideal laboratory for the RAF, exposing it to every sort of terrain.

The romantic idea of “knights of the air” providing panoramic surveillance of an inscrutable antique land proved resistant even to reports of visibility problems, failures to identify tribes, and bombardment of wrong targets. Instead, accuracy was deemed moot, since aircraft were meant to be everywhere at once, “conveying a silent warning.” Despite the government’s twisted assurance that the regime worked through “terror,” bombardment was used routinely even for tax collection. As a wing commander explained, in Iraq they did “with explosives what should be done by policemen and sticks.”

A hundred casualties were not unusual in a single operation, besides those lost to starvation and the burning of villages; homes, crops and livestock were also targeted. Casualty numbers were not collected, since all information was deemed untrustworthy. In its Iraqi cocoon, the RAF was safe from criticism, protected by the notorious fallibility of all news from “Arabia.”

Some Britons were confused: the Guardian asked why the government had to send “all this machinery, all these forces…if we were establishing a political system on the basis of popular consent?” Members of Parliament pressed futilely for “particulars of where and why…bombardments have taken place…[and] whether inhabitants have been killed.”

To reassure this skeptical public, the Air Ministry censored news from Iraq and explained that Arabia was a biblical land of “continuous guerilla warfare,” where tragedy was a “normal way of life.” The Chief of Air Staff bluntly told Parliament in 1930, “these tribes love fighting for fighting’s sake…They have no objection to being killed.” Meanwhile, propaganda touted the benevolence and romance of the regime. Air control enabled colonial rule in an increasingly anti-imperial world; it was discreet and cheap enough to muffle criticism at home and abroad.

Air control spread elsewhere eventually, but the early notion of Iraq’s peculiar suitability gave it a place to become normalized as a system of colonial rule. The Middle East became the “Land of the RAF”; air control underwrote the RAF’s survival as a military service. Most British airforcemen in the next world war had gotten their training and experience in the Middle East, including “Bomber” Arthur Harris, head of Bomber Command in World War Two.

But air control did not work.

Anger about civilian deaths and continual colonial surveillance provoked frequent insurgency in Iraq and undermined the legitimacy of local governments until revolution overthrew the British-backed regime in 1958.

Even so, British myths about successful air control continued to influence Western engagement with the region. In 2003, the Pentagon dreamed of replacing troops in Iraq with airpower that could “strike everywhere—and at once.” In 2008, it launched a secret program that put drones over Iraq, Afghanistan, and later Pakistan, Yemen, and Somalia—all of which had earlier seen British airpower. Again, aerial policing aimed to suppress insurgency without public scrutiny. Again, no one counted the dead. Again, “Reapers” dropping “Hellfire” missiles styled bombardment as biblical fate.

Among World War I’s most important legacies was the remaking of the Middle East, and the idea of the region as a place exempt from the this-worldliness that constrains human activity elsewhere. It was there that the British invented new forms of imperial rule for an increasingly democratic and anti-imperial age. That covert imperial style compromised the legitimacy of many postcolonial governments, sowing the seeds of many of our present discontents.

Priya Satia is the author of Empire of Guns: The Violent Making of the Industrial Revolution and Spies in Arabia: The Great War and the Cultural Foundations of Britain’s Covert Empire in the Middle East, both available now. 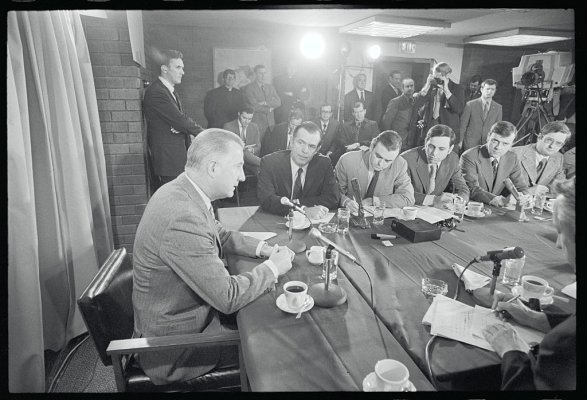 Journalistic Objectivity Evolved the Way It Did for a Reason
Next Up: Editor's Pick