President Joe Biden visits Section 60 of Arlington National Cemetery on April 14, 2021. That day, Biden announced his decision to fully withdraw U.S. forces from Afghanistan by the 20th anniversary of the Sept. 11, 2001, attacks.
Yuri Gripas—Abaca/Bloomberg/Getty Images
Ideas
By Phil Klay
Klay, a National Book Award-winner, is the author of Missionaries and teaches at Fairfield University's MFA program.

The Russian soldier, it was said, had suffered a concussion, then total memory loss. When he woke up in Kabul, in the waning days of the Soviet War in Afghanistan, he had trouble figuring out what was going on. As the journalist Artyom Borovik told the story, when his fellow soldiers tried to reorient him, he just kept asking the same question: “What are we doing in Afghanistan?” No one could give a definite answer.

Even with America in charge, the answers to that question haven’t gotten much better since the 1980s. In 2001, we were conducting “comprehensive and relentless operations” to drive terrorists out of Afghanistan and bring them to justice. In 2009, we were surging 30,000 troops to “seize the initiative, while building the Afghan capacity that can allow for a responsible transition of our forces out of Afghanistan.” In 2017, we were “obliterating ISIS, crushing al-Qaeda, preventing the Taliban from taking over the country, and stopping mass terror attacks against Americans before they emerge.” But since none of that really happened, other rationales emerged. There was the humanitarian argument, exemplified by a 2010 TIME cover photo of a mutilated Afghan girl, her nose severed, beside the words, “What Happens if We Leave Afghanistan.” Then there was the credibility argument, that if we don’t stay in other countries will wonder, as the journalist Eli Lake put it, if “the US will have their backs to confront bullies like China.” Finally, the war has been reframed as not a war but a necessary commitment for maintaining global order, in keeping with long-term troop presences in South Korea, Japan, and Germany.

And so now President Biden has announced a withdrawal date from Afghanistan exactly two decades after 9/11. It’s fitting. Politically determined deadlines invested with great importance by presidents have long been a staple of the war. The question for Americans concerned about “forever wars,” though, is how meaningful this withdrawal will actually be.

After all, over the decades the war in Afghanistan hasn’t just generated endless rationales for its own existence, it’s generated rationales for other wars as well. Soon after 9/11, Congress passed an Authorization for the Use of Military Force that allowed the president to use all “necessary and appropriate force” against those who “planned, authorized, committed or aided” the September 11th attacks. Though intended for the Taliban and al Qaeda, this language later stretched to justify attacks on al-Shabaab in Somalia, Al Qaeda in the Arabian Peninsula in Yemen, the Khorosan Group in Syria, and others. By the Trump administration the precedent was firmly set. If you’d like to occupy Kurdish-controlled Syrian oilfields, or kill an Iranian general, the AUMF was your justification. “Dems should raise the minimum wage using the 2001 AUMF” joked Yale Law professor Scott Shapiro recently on Twitter. And why not? Using an authorization intended to fight the Taliban as an excuse to operate in 17 other countries (Iraq, Somalia, Syria, Niger, and so on) while leaving Afghanistan itself is only slightly less ludicrous.

If President Biden truly wants “to end the forever war,” as he declared on April 14, dealing with the over-broad AUMF is a critical piece, and one he has responsibility for. As the conservative legal scholars Curtis A. Bradley and Jack L. Goldsmith point out, “almost every issue about the AUMF’s meaning and scope remained unresolved at the end of the Bush presidency,” and it was during the Obama administration that it transformed into “a protean foundation for indefinite war against an assortment of terrorist organizations in numerous countries.” A key moment came in September of 2014, when the Obama White House announced, three years after supposedly ending the war in Iraq, that it could launch an air war in both Iraq and Syria against ISIS without Congressional approval because the fight fell under the old 2001 authorization—despite that ISIS didn’t exist in 2001 and was competing with al Qaeda, which had excommunicated it.

Scholars debate how much of a stretch this was, but the legal wrangling obscures the its political utility. Obama had come into the White House as a critic of the Iraq War, and would advocate a “Don’t do stupid” stuff foreign policy. Pulling troops out of Iraq with great fanfare only to watch the country implode and then put troops back in did not fulfill that particular strategic vision. Relying on the 2001 AUMF allowed Obama to bypass arguing for renewed war to Congress and to the American public, and it gave Congress a pass on taking a tough vote (who wanted to be the next Hillary Clinton, on the hook years later for a vote that was popular at the time). Instead Obama suggested revisions to the 2001 AUMF (something President Biden has also done) while simultaneously expanding its scope.

By 2015, as we ramped up military involvement, Obama and senior officials still bragged about having “ended two wars.” When in 2016 a Navy SEAL, Special Warfare Operator 1st Class Charles Keating IV, died during a firefight with ISIS in Northern Iraq, the White House Press Secretary clarified that he “was not in a combat mission,” but had merely found himself “in a combat situation.” The ambivalent American public didn’t like the wars but also feared the rise of ISIS, and so the administration let them know we were tackling ISIS and al Qaeda and the Taliban and “associated forces” in Iraq and Afghanistan and Syria and Somalia and Yemen and so on while somehow also not fighting a war. Good politics, perhaps, but hardly leadership. Donald Trump’s later chaotic approach to military policy, in which allies learned of things like a withdrawal of forces from Syria by tweet, was deeply irresponsible but ultimately a further extension of the precedent that it was the executive at war, not the American people. And fickle changes to a policy that has never been seriously argued for or debated carries no real political costs.

No wonder plenty of veterans don’t trust the Biden’s recent declaration. “There’s no such thing as a full withdrawal under any president,” Army veteran and journalist Jacob Siegel tweeted. “There will absolutely still be CT and covert SOF assets in the country after ‘the war has ended.'” It’s happened before, and in fact the Pentagon is already discussing where to reposition forces, possibly in Tajikistan, Kazakhstan and Uzbekistan, to enable strikes inside the country. As a friend texted last week, “I find it amusing that people think AFG is ending, and the shell game of ‘troops on the ground’ is suddenly over.” As long as the open-ended authorization for war continues, with no time limits, or geographic limits, or specificity about targets, so does the war.

Repealing the AUMF is not necessarily a pro or antiwar position. Congressman Peter Meijer, a Republican from Michigan who recently joined bipartisan legislation to claw back the Congressional role in warmaking, sees it as a precondition for responsible statecraft. “I strongly think repeal would create responsible policy and force Congress to make tough decisions,” he told me over the phone. “What we can’t have is another situation like we had in Niger, where troops die and Congress says, ‘We didn’t even know troops were there.’”

Critics of the withdrawal suggest we’ll have to return, that it will cause a collapse of government, a humanitarian disaster, and a spread of terrorism that will necessitate more intervention, as in Iraq. Perhaps. But if we do return, we should do so after the President has made a case to the American public articulating why, and what it will cost, and then our representatives should debate and vote. Without the approval and commitment of the American people, we’re unlikely to have either a successful war, or a durable peace. And our soldiers won’t have the bare minimum they’re owed by a democratic citizenry—the answer to the question, “Why are we here?” 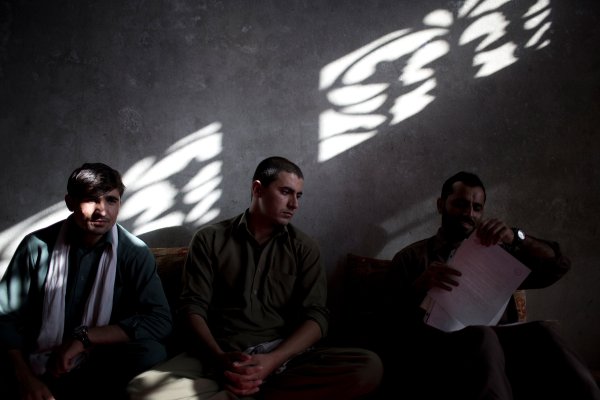 Afghan Interpreters Risked Their Lives to Help the U.S. We Must Not Abandon Them
Next Up: Editor's Pick