The Number of Unaccompanied Children Arriving at the U.S.-Mexico Border Doubled From February to March

Young children are housed inside a pod at the Department of Homeland Security holding facility run by U.S. Customs and Border Protection on March 30, 2021 in Donna, Texas.
Dario Lopez-Mills - Pool/Getty Images
By Jasmine Aguilera

Officials at the U.S.-Mexico border saw a 100% increase in the number of migrant children arriving alone from February to March, according to data released by the U.S. Customs and Border Protection (CBP) on Thursday morning. CBP encountered about 18,890 unaccompanied children during March. In February, CBP had encountered 9,457 unaccompanied minors.

The number of unaccompanied migrant children at the border—as well as an overall increase in people arriving at the U.S.-Mexico border, mostly from Central America—has increased rapidly since January, and has created a challenge for the Biden Administration. Government officials have been forced to quickly build shelter space for unaccompanied migrant children and process them from the custody of CBP to the Office of Refugee Resettlement (ORR), an agency within the Department of Health and Human Services (HHS) that works to locate a sponsor for each child, typically a family member, and unite them.

About 90% of the children arriving are able to be united with a family member or sponsor already in the U.S., according to Administration officials who spoke to reporters during a press briefing on Wednesday. “We have dealt with increases in encounters and arrests before and those increases have prepared us to face the challenges we’re dealing with right now,” one Administration official told reporters on Wednesday. “We are moving in the right direction, but we know we have a lot of work ahead.”

While children never stopped arriving at the border prior to Joe Biden taking office, most were not able to enter in the U.S. during most of 2020 because of a Trump-era rule known as Title 42, which allows officials to immediately “expel” anyone who tries to make an unauthorized entry to the U.S. or make a claim for asylum, including children. The Biden Administration slightly changed Title 42 in late January to allow for unaccompanied children to enter, but most single adults and family units continue to be expelled to Mexico. During a March 26 press call with reporters, Tom Wong, associate professor of political science at UC San Diego, said there is not enough data to know if Biden’s policies are specifically causing the increase of apprehensions at the border. He hypothesizes that smugglers and the spread of misinformation are contributing to the uptick.

HHS officials have said that during 2020, shelter capacity intended for the use of unaccompanied migrant children was cut down because of the low number of kids who were processed into the U.S. and to allow for better social distancing within the facilities. As more children began entering the U.S. in January, HHS had to quickly bring back the shelter capacity it had prior to COVID-19. Both HHS and DHS have worked to build several temporary facilities, mostly in Texas, to shelter children before they’re united with sponsors.

DHS is required to transfer children into HHS custody in under 72 hours, but because of the high number of children and the bed space available, many have had to stay in CBP custody for longer periods. Administration officials said on Wednesday that the 30-day average for the number of children who are transferred out of CBP and into HHS increased from 276 per day at the end of February, to 507 at the end of March, indicating that officials have been able to work faster to get children out of CBP custody.

Administration officials told reporters on Wednesday that they will continue to work to process children as quickly and as safely as possible, ensuring that family members are still vetted and verified before the child is handed to them. “We are seeing a lot of progress and we expect to continue to see progress,” one official said.

The numbers of overall enforcement encounters, which is defined by CBP as instances when a person is expelled or apprehended, also increased during March, the new data shows. CBP encountered more than 172,000 people attempting to cross the border, according to Administration officials, a 71% increase over February. The majority were single adults. CBP expelled 103,900 individuals under Title 42, 28% of whom had been previously expelled.

The number of people attempting to cross the border, including unaccompanied children, are expected to continue to increase in the coming months, considering seasonal patterns of migration.

Thursday’s March data comes three days after polling by the Associated Press-NORC Center for Public Affairs Research found that 40% of Americans somewhat or strongly disapprove of Biden’s handling of unaccompanied migrant children at the border. 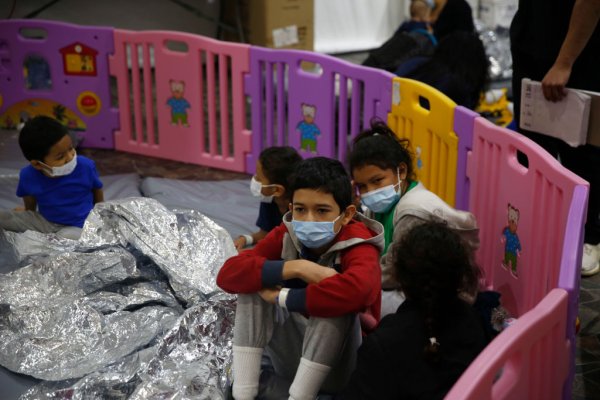 What's Happening to Unaccompanied Minors at the Border?
Next Up: Editor's Pick