Joe Biden held his first formal news conference as president 65 days into this presidency, after making a series of consequential moves in the early weeks of his Administration to help curb the COVID-19 pandemic and ease the economic pain in the country. But he didn’t get asked any questions about the coronavirus.

Instead, reporters pressed Biden on things his Administration hasn’t done— like taking a position against the Senate filibuster rule, implementing executive action on gun control in the wake of two mass shootings, and stopping the flow of unaccompanied children coming to the U.S. southern border.

The focus on Biden’s problems rather than his victories was a reminder that, in the highest office in the land, reality intrudes on even the best laid plans. The Biden Administration has so far been a model of coordinated message discipline. But once Biden formally faced reporters, he was forced to answer questions with responses that stretched well outside the confines of his staffers’ calibrated talking points and wade into difficult territory on multiple looming challenges for his presidency.

In particular, the surge of migrants to the U.S. border with Mexico is creating difficulties for the Biden Administration as they struggle to control the situation while trying to take a more humane approach than the Trump Administration did. With border crossings spiking since Biden took office— U.S. Customs and Border Protection said it encountered 100,441 individuals attempting to cross the southern border in February 2021, a 28% increase from January— Republicans argue that Biden reversed former President Donald Trump’s immigration policies without considering the implications. Biden pushed back on this narrative Thursday, saying the increase follows an annual pattern. He defended his decision to stop expelling children arriving without parents. Pointing to federal data showing that crossings spiked 31% in 2019 under Trump, he attributed the increase in arrivals to a cyclical surge from devastating storms and rising violence in the migrants’ home countries. “Does anyone suggest that there was a 31% increase under Trump because he was a nice guy and he was doing good things at the border?” he asked, standing before thirty masked, socially distant reporters in the East Wing of the White House. “That’s not the reason they’re coming.”

But even as the Administration allows unaccompanied minors to remain in the country, border officials have been overwhelmed by the numbers, and are running out of room to house them. Consequently, some children have stayed in processing facilities longer than the 72 hour legal limit, and advocates and lawmakers who have visited said they were appalled by the conditions. Photographs released earlier this month by Texas Democratic Rep. Henry Cuellar from a Customs and Border Protection facility in Donna, Texas show children sleeping on mats with foil blankets. Biden said these conditions are “unacceptable,” and that the Administration is working to expand housing for these children. Biden also faced criticism for not opening the facilities to the media, and he said he did not know when they could provide that access.

Immigration wasn’t the only topic Biden addressed from the podium. He said it was his “expectation” that he would run for reelection in 2024, with Vice President Kamala Harris with him on the ticket. He acknowledged that the U.S. won’t be withdrawing troops from Afghanistan by a May 1 deadline set in negotiations with the Taliban. “It is not my intention to stay there for a long time,” Biden said. Asked if he thought U.S. troops would be in Afghanistan next year, Biden said, “I can’t picture that being the case.”

There was one topic that hung over most policy questions: whether Biden will support abolishing the filibuster, the Senate procedural tool that effectively requires a 60-vote threshold for most legislation. Biden, who spent over three decades in the Senate, restated his willingness to revert back to a “talking” filibuster, where Senators would need to speak indefinitely in opposition to a bill rather than simply filing a motion. He also said he agreed with former President Barack Obama that the procedure was a ‘relic of the Jim Crow era,‘ and left open the idea of additional reform to pass his agenda in the face of Republican opposition in the evenly-divided Senate. “We’re ready to get a lot done. And if there’s complete chaos because of the filibuster, we’ll have to go beyond what I’ve just said,” he said.

Biden seemed particularly open to filibuster reform to pass the voting rights legislation that passed the House but faces an uncertain future in the Senate. Experts supportive of the bill say it would hamper Republican efforts to pass state and local laws that restrict access to voting, which Biden called “sick.” The effort’s effect on discouraging Black voters to go to the polls “makes Jim Crow look like Jim Eagle,” Biden said. He said he wants to spend time figuring out how to get House-passed voting rights legislation passed by the Senate and “educating the American public.”

It is also because of the filibuster that the Senate is unlikely to pass legislation mandating universal background checks, which Biden pressed the chamber to do in the wake of the shootings this month in Atlanta, Georgia and Boulder, Colorado that killed more than a dozen people. Asked when he was going to do more on gun control, Biden said it was a “matter of timing” and he believes that successful presidents carefully weighed when to advocate for initiatives they want to accomplish. He pivoted to talk about infrastructure instead, which he said will be his next major push. Rebuilding U.S. roads, bridges, water pipes, and other crucial infrastructure will make the country safer, the economy more productive and create jobs, Biden argued. “There is so much we can do,” he said.

Those comments were almost certainly a preview of how the Biden Administration will pitch this priority to Congress and the American people. Even at Biden’s first press conference, some of the careful messaging remained intact. 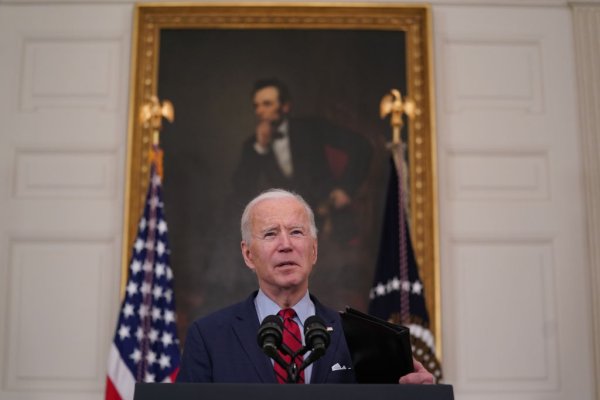 After Mass Shootings, Joe Biden Faces Pressure to Act on Gun Control
Next Up: Editor's Pick