How Foster Families Are Stepping Up to House Unaccompanied Children Arriving at the U.S.-Mexico Border

The hands of asylum seeking migrant children from Central America are seen holding the border wall as they await to be transported to a processing center by U.S. Border Patrol agents in Penitas, Texas, on March 17
Adrees Latif—Reuters
By Jasmine Aguilera

Jay and Leslie, a couple who live in the Philadelphia area, have so far fostered four children this year, three boys and one girl, all of them migrants who arrived at the U.S.-Mexico border recently without their parents. The children are among the thousands who have showed up at the border since January fleeing violence, poverty or natural disaster in their home countries, hoping to reunite with loved ones in the U.S.

The uptick of unaccompanied children presenting themselves at the border has proven a challenge not only for the Biden Administration, but also for the dozens of nonprofit organizations that manage the transfer of children from the border and into temporary foster care until the child can be reunited with a vetted sponsor in the U.S. Even though influxes of unaccompanied children arriving at the border is not a new phenomena, for most of 2020, the Trump Administration did not permit them to enter the U.S., a policy that led many of the nonprofit organizations running programs to foster these children to either cut staff or the number of beds available to shelter children. COVID-19 also led to further restrictions, including cutting bed space to allow for social distancing. Now as thousands of children—a mix of newly arrived ones and some who were turned away in 2020—present themselves to U.S. Customs and Border Protection (CBP), agencies are scrambling to meet the need.

“We saw a dramatic reduction of children [in 2020]. That does not mean that the number of children at the border weren’t still there, they just weren’t being allowed entry into the United States,” says Dona Abbott, senior advisor on global refugee and immigrant services at Bethany Christian Services, one of the nonprofit organizations running transitional foster care programs for unaccompanied migrant children. Through organizations like Bethany, children are placed in foster care temporarily until their sponsor, typically a family member, in the U.S. is located and their identity and relationship to the child is verified. (Government officials say about 90% of all unaccompanied minors are able to reunite with a sponsor in the U.S.)

“The bottom line is that we need to address an emergency situation of unaccompanied children coming across the border who have already been through so much and need our help now,” says Krish O’Mara Vignarajah, president and CEO of LIRS. “We saw similar spikes in 2014, 2016 and 2019. My hope is that we will learn from what feels like a roller coaster ride. This turbulence hurts vulnerable children. We can’t keep building up the capacity and then decimating it.”

Because the government stopped receiving unaccompanied migrant children in March of 2020, the systems in place to quickly reunite children with their sponsors were gutted. The U.S.’s Title 42 rule, immediately “expelled” anyone arriving at the border illegally or to make a claim for asylum because of the risks posed by COVID-19. In November of 2020, a judge determined that unaccompanied children should not be expelled under Title 42 after the ACLU sued the Trump Administration. The Biden Administration officially stopped expelling unaccompanied children, but has continued to expel family units back to Mexico, only processing them into the U.S. in cases where Mexico has run out of shelter space.

“What we’re seeing is a lot of children who are victims of adults’ decisions,” Abbott says. “That probably sums up every child’s story at the border. You have all the children who have been there waiting because, as a country, we decided not to process them at the time they came to the border…in the meanwhile, the system that they would have entered into got dismantled.”

A U.S. Border Patrol Agent escorts two asylum-seeking unaccompanied minors from Central America as others take refuge near a baseball field after crossing the Rio Grande river into the United States from Mexico on rafts, in La Joya, Texas, on March 19
Adrees Latif—Reuters

After fostering one child in March of 2020—a young girl from Ecuador—Jay and Leslie waited patiently for months to foster another child. The couple describes themselves as empty nesters with two grown sons in college. They have the space and time, and their faith compelled them to become foster parents, they tell TIME. “You have to have compassion for someone who is by themselves, not with their family, in a new environment, new language, new everything,” Leslie says. “You realize that you’re their first link, their first stepping stone into the United States. It’s a big responsibility.”

TIME spoke to Leslie and Jay on the condition that their last names remain anonymous out of concern for their safety and the safety of the children they foster. “It is politicized,” Leslie says, adding that while she’s never faced a contentious situation herself, another woman in the program had been yelled at by a stranger for fostering migrant children. “Some people think if you’re helping, you’re contributing to the problem, which is totally not the case, but they’re not supportive of people coming over the border.”

During a call on Thursday afternoon, government officials told reporters that the Department of Homeland Security (DHS) was holding about 4,500 children. Children are required to pass through DHS custody within 72 hours, and are then transferred to Health and Human Services (HHS), which oversees COVID-19 testing, quarantine, and the placement of children into temporary foster care through the Office of Refugee Resettlement (ORR). During the Thursday press call, officials said that HHS had approximately 9,500 children in its care as of Wednesday. Because of the high number of children, officials said some children end up staying in DHS custody longer than 72-hours.

Temporary facilities have been built by DHS to house children in its custody temporarily, including a facility in Donna, Texas, that quickly became overcrowded. Officials also converted the Kay Bailey Hutchison Convention Center in downtown Dallas into a holding facility for migrant teens. Additional facilities are being built in Texas and Arizona, officials said Thursday. On average, it takes 34 days before a child is reunited with their sponsor, according to government officials.

In response, DHS Secretary Alejandro Mayorkas issued a lengthy statement on Tuesday saying “As difficult as the border situation is now, we are addressing it. We have acted and we have made progress. We have no illusions about how hard it is, and we know it will take time. We will get it done. We will do so adhering to the law and our fundamental values. We have an incredibly dedicated and talented workforce.”

Jay and Leslie say they understand how highly politicized this influx of children has become, but add that they steer clear of the politics. What they see are children with pressing needs. They’re also in a unique position to sometimes witness the reunification of a child with their loved one in the U.S.

Jay’s voice cracks when he talks about the first child he and Leslie ever fostered, and taking her to reunite with her mother already in the U.S. “When the mom pulled up, the little girl looked up at us with a face almost like ‘can I go see her?'” Jay says, choking up. “She just goes running and jumps into her mom’s arms.” The girl’s mom and step father had showed up with balloons and stuffed animals, plus presents for Jay and Leslie, a thank you for watching over their daughter. 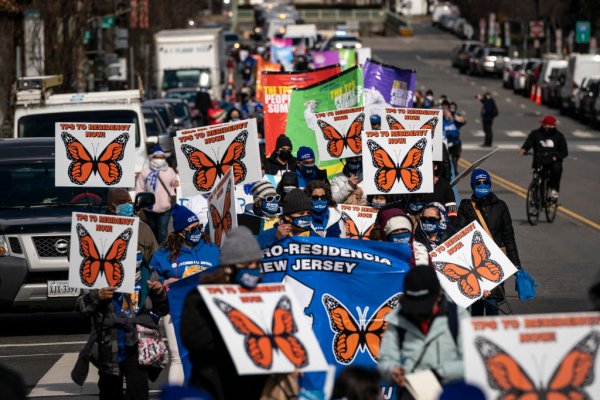 Is U.S. Immigration Reform Possible?
Next Up: Editor's Pick