At the start of her career, Olivia Liang was “anti-martial arts.” To the Taiwanese American actor entering the entertainment industry in 2016, this was a box that Asian performers had been placed in for years—a form of typecasting she would go on to experience herself. “I had several people, the follow-up question to, ‘You’re an actor?’ was ‘Do you do martial arts?’” Liang, 27, says. And so she made a promise to herself: she was not going to learn martial arts unless someone paid her to. “I didn’t want that to be the only way in for me,” Liang explains. “And now, of course I’m on a show called Kung Fu and I’ve really done a 180.”

This shift in attitude did not come without careful consideration. Liang was wary of one-dimensional Asian characters whose martial arts skills were their only defining trait. But her role in Kung Fu—the CW series premiering on April 7—offers something entirely different. She plays Nicky Shen, a Chinese American woman who, after dropping out of college and spending a few years in a monastery in China, returns home to San Francisco. Nicky’s journey unfolds as she faces an organized crime group that threatens the safety of her family and community, and searches for the person responsible for murdering her Shaolin mentor at the monastery.

The makeup of the cast carries extra weight given that Kung Fu is a reimagining of the 1972 television show of the same name by Ed Spielman, which followed the story of the half-Chinese, half-white Shaolin monk Kwai Chang Caine, played by David Carradine, a white actor. The new adaptation arrives at a time when calls for an end to Hollywood’s whitewashing of roles have gotten louder. In recent years, a pattern of white actors cast as Asian characters in particular—from Tilda Swinton as the Ancient One in Doctor Strange to Scarlett Johansson as Major Motoko Kusanagi in the live-action adaptation of Ghost in the Shell—has sparked outcry for change.

The modern-day adaptation of Kung Fu is helmed by television writer Christina M. Kim. At a media event last month, Kim said that the original series was groundbreaking for its introduction of kung fu to a U.S. audience. But she also acknowledged the elements she wanted to alter. “The lead actor was not Asian. And for me, in developing the show, it was really important that we change that,” Kim said. “And for myself as a woman, I really wanted a strong female Asian lead who was kicking butt and was the role model that I wished I had growing up on TV.”

Liang echoes these sentiments. “Now we get to bring it into this modern world and make it the way that maybe it should have been made from the beginning,” she tells TIME.

The complicated history of Bruce Lee and the original Kung Fu

The original Kung Fu aired for three seasons between 1972 and 1975. In the show, Caine faces anti-Asian discrimination as he ventures across the American Old West. In one scene, a character called the Jerk tells Caine he smells “yellow,” calls him “Chinaman” and taunts, “no speaking English?” The blatant racism is complicated by the fact that Caine was played by a non-Asian actor. Carradine also starred in the 1986 film and a television series in 1993—both of which were sequels to Caine’s story.

Before Carradine was cast, Bruce Lee was considered for the role. Liang tweeted about Lee’s absence from the show shortly after promotional materials for Kung Fu were released: “Those in charge didn’t think people would want to watch an asian-led show, so enter the YT man. We have come a long way and i’m proud we get to reclaim this.”

Fred Weintraub, who was an executive at Warner Bros. when the first Kung Fu was being made, recounted Lee’s audition and the response to it in his 2011 memoir—Bruce Lee, Woodstock And Me: From The Man Behind A Half-Century of Music, Movies and Martial Arts. “I was as enthusiastic as ever to put Bruce into the role of Kwai Chang Caine,” Weintraub wrote, and described sending Lee to Tom Kuhn, who was the Head of Television Programming at Warner Bros. In the audition, Lee gave Kuhn a stunning demonstration with nunchucks. Weintraub recounted Kuhn’s reaction: “‘He’s amazing,’ Tom gushed. ‘I’ve never seen anything like that. But getting him the lead is still going to be a long shot. He might be too authentic.’”

Weintraub, who later produced the 1973 film Enter the Dragon starring Lee, expressed his frustration at Kuhn’s words being “right.” “The powers that be had a hundred different reasons why Bruce was wrong for the part: he was an unknown, he was short, his English wasn’t good enough, he lacked the necessary serenity to play the role… But at the end of the day, there was really only one reason,” he wrote. “In the history of Hollywood there had never been an Asian hero—unless you count Charlie Chan. But even that iconic Chinese-American character was never popular in films until he was played by Warner Oland, who was not only Caucasian, he was Swedish, for chrissake.”

After Lee died in 1973 shortly before the release of Enter the Dragon, his wife Linda wrote in her memoir Bruce Lee: The Only Man I Knew that he had conceptualized the story of a Shaolin kung fu master traversing America and pitched it to Warner Bros. “The studio contacted him and he was soon deeply involved, offering numerous ideas, many of which were eventually incorporated in the resulting TV success, Kung Fu,” she wrote. A 2018 biography—Bruce Lee: A Life by Matthew Polly—asserts that the 1972 series originated from a file that Ed Spielman had submitted in 1969 with Howard Friedlander, and Spielman said in 1974 that 10 years of his research led to the creation of Kung Fu.

Representation as one ‘long-term solution’ to combat anti-Asian violence

Kung Fu’s release coincides with a national reckoning with anti-Asian racism, as the number of hate incidents against Asian Americans surged in the past year. In the lead-up to the show’s debut, members of its cast have repeatedly spoken out against anti-Asian violence. Tzi Ma had posted a video at the start of the pandemic, in March of 2020, to address the growing number of attacks against the AAPI community—after the actor himself was told, “You should be quarantined.” Following the Atlanta-area shootings on March 16 that took the lives of eight people, including six women of Asian descent, Ma reposted the video saying: “Exactly 1 year today, I sent a message. Why has it gotten worse?” Members of the Kung Fu cast including Ma later shared personal experiences of facing discrimination and racism in a #StopAsianHate video.

“I’ve had a lot of mixed feelings over the past few weeks—this strange survivor’s remorse, this weird imposter syndrome,” Eddie Liu tells TIME. In Kung Fu, Liu, who is Hakka Chinese and grew up in New York, plays Henry Yan, a Chinese art history graduate student and Nicky’s new love interest. The 33-year-old actor talks about the strange experience of participating in recent activities promoting Kung Fu. “Here we are getting to talk about our show, which is this fabulous, wonderful, once-in-a-lifetime opportunity. And in stark contrast there are these other Asians in the news for getting beat up and killed,” Liu says. “Why does it have to live in such extremes?”

When asked about the March 16 shootings and anti-Asian hate at Kung Fu’s media event—which took place one day after the tragedy in Georgia—Ma said, “I’m not quite sure what the short-term fix is, and I believe we are the long-term solution.” To him and the cast, a story like Kung Fu moves the needle forward by humanizing Asian Americans. This is significant because, as Liu says, attacks are often carried out when perpetrators fail to see Asian Americans as humans. “It’s astounding to me that sometimes what it takes for people to recognize humanity in others is to see them on a TV screen,” Liu says. “I don’t think that should be a requirement.” And yet, he acknowledges, it is often television shows and movies portraying life experiences different from the viewer’s that changes their perspective.

Liang feels similarly. She notes the power that representation in media—whether through news or entertainment—has on shaping worldviews, and addresses the shortcomings of the entertainment industry. “Hollywood has kind of failed Asians for quite some time in representing us,” she says, referencing repeated portrayals of one-dimensional characters who are at times the butt of the joke. “If we only ever portrayed supporting characters and small little side characters who are the John Doe Number One and Dragon Lady Number Two,” asks Liu, “what does that do to the psychology of someone watching that over time—over a generation?” Liu emphasizes that the profound effect of Asian American characters being Kung Fu’s main protagonists “can’t be overstated.”

Part of Kung Fu’s authenticity is how the series centers a Chinese American family that just “exists,” as Liang puts it, and experiences the spectrum of human emotions. “They get to see us fight with our siblings, joke around with our siblings, be annoyed at our parents, want to figure out what we want to do with our life,” Liang says. “The story that we’re telling is so universal and it’s just being told from an Asian perspective.” And when cultural influences are incorporated into the show—for instance, members of the Shen family taking off their shoes before entering the home—there is no sense of obligation to explain Chinese customs and traditions. “We’re just existing, and bringing those nuances to the screen,” Liang says.

Liu also points to the significance of having diversity behind the camera. He gives a nod to Christina M. Kim, the executive producer of Kung Fu. “[Warner Brothers] came to her, an Asian American woman, and they didn’t have to,” Liu says about the new adaptation. “The fact that she is doing this and she’s our captain, that’s something we celebrated.”

‘Lending our microphone’ to address injustices

Greater representation in Hollywood is significant not just because TV series, films and other forms of entertainment have the power to shift culture, but because actors, producers and directors themselves also wield that influence as their platforms grow. With the arrival of Kung Fu comes a new group of several up-and-coming Asian American actors who are loudly speaking out against anti-Asian hate. “Regardless of whether or not we were public-facing we would want to be speaking out on these issues,” Liang says. When it comes to addressing attacks on Asian Americans, she says she often takes the approach of amplifying the messages of organizations doing much of the groundwork.

Liu says that if injustices in the world—including the hate crimes—were adequately addressed by politicians and other leaders, then actors like him would not need to discuss them. “I would love to be able to go to work and just think about being an entertainer,” he explains. “But we live in a world where issues are overlooked and people are ignored—and sometimes if it means lending our microphone a little bit to shed light on an issue, then yes, we’ll do that because we care.” 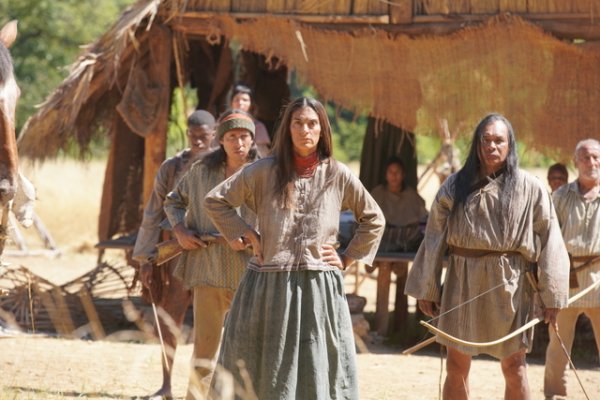 HBO’s Exterminate All the Brutes Is a Radical Masterpiece About White Supremacy, Violence and the History of the West
Next Up: Editor's Pick