If You're Surprised by the Anti-Asian Violence in Atlanta, You Haven't Been Listening. It's Time to Hear Our Voices

Ideas
By Eric Nam
Nam is a Korean-American Singer-Songwriter, K-pop Star and Entrepreneur from Atlanta, Georgia.

On March 16, a domestic terrorist tragically killed eight people—six of them Asian women. While prosecutors and law enforcement still debate whether to designate the murders as hate crimes, millions of Asian Americans and Pacific Islanders (AAPI), including myself, are left feeling abandoned and overwhelmed with memories of our past, the realities of our present and fears for our collective future in a country we love.

The news quite literally hit home for me—I was born and raised in Atlanta and some of the murders took place near my old stomping grounds. I was filled with shock, grief, frustration and then anger. As attacks on AAPIs have spiked over the last 12 months, the calls for help and the warning signs from our community have felt ignored—as if the stories were about people living on the other side of the world, not about your neighbors in America.

For many, the AAPI experience is one fraught with anxiety, trauma and identity crises. A complicated history with an American culture built on white supremacy and systemic racism is further complicated by a diverse community that, itself, is not a monolith. As “perpetual foreigners” and subjects of the model minority myth, Asians are invited but not fully integrated, or just largely ignored under the guise of being “O.K.” in culture and politics. As AAPIs we have been excluded, interned, vilified, emasculated, fetishized and murdered.

For some time, I thought that this uncomfortable position we are in was our own doing. We wanted to be seen as American. We wanted to be accepted and celebrated just like everyone else. We wanted to fit in. And yet—our hair was different, our homes didn’t speak English, and because we were not of the majority, many of us felt that we should just be thankful. It wasn’t their fault. We should have easier names. We shouldn’t speak in our parents’ languages. We shouldn’t bring our snacks to school, because your teacher will ask to try it, feign disgust and throw it away in front of your laughing peers, as happened to me once. “Yan Yan in the can can,” she said to me.

A submission to, and eventual complicity with racism normalized a dynamic that should not exist. To grow up believing we needed to be O.K. with racism in order to have a seat at the table is not O.K.. To internalize racism at such a young age, in retrospect, warped my sense of normality. As a victim of a hit-and-run incident as a young teenager, I actually questioned if my mom was in the wrong when the driver got out of his car, slammed his fists on our window and screamed at my mother, “You dumbass motherf-cking ch-nk!” I’m Korean, by the way.

Can you imagine wanting to apologize to your abuser? This is how confusing and convoluted growing up AAPI can be.

To suggest the murders of Daoyou Feng (44), Delaina Ashley Yaun Gonzalez (33), Suncha Kim (69), Hyun Jung Grant (51), Soon Chung Park (74), Xiaojie Tan (49), Paul Andre Michels (54) and Yong Ae Yue (63) were not racially motivated is completely naive and racist in itself. To dehumanize the lives of eight individuals because someone was, as the sheriff’s department spokesman put it, “having a bad day” or to blame their actions on “sex addiction” is the height of white privilege and reveals the depth of the over-sexualization—and objectification—of an entire race’s gender. Why are women of our community the outlet for and victims of your sexual addiction? How dare you.

Everything about this is tragic and wrong. But this is the way it’s been and continues to be.

Several still ask, “Why haven’t you said anything?” Let’s be very clear: we have always been pleading for your help, perhaps more than ever over the past year. You did not listen. You did not hear us. Please hear us now because being silent now is being complicit.

So what can we do? All mass change starts small—and in this case, it means empowering and supporting our local AAPI communities and businesses; it means reevaluating the parameters and punishments for “hate crime”; it means everyone committing to the grand experiment of a United States whose own face must evolve with its rapidly changing citizenry’s.

This is in no way a comprehensive list and it will be ever-changing, but it’s a place to start.

An attack on one of us is an attack on all of us, but the good news is change can also start with one of us. Will it be you? Whether you live in Atlanta or in any city of this country, empower yourself by understanding our experience, buying from our local communities, and reinforcing our commitment to restorative justice that is not just a correction of inequality but an opportunity to grow opportunities for more.

We are hurt, exhausted, full of sorrow and angry—rightfully so. But we must continue to persevere. We must all continue to be active in creating the change that we so badly want and need for ourselves and our future generations. 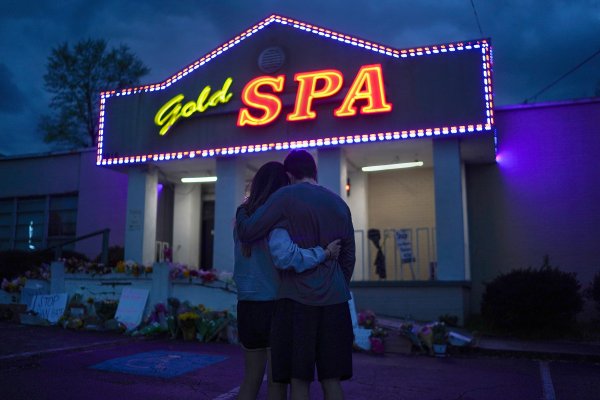 Anger and 'This Constant Fear' for Asians in Atlanta
Next Up: Editor's Pick