Over the past few days, a tumultuous discourse around the musician Lil Nas X has reached a fever pitch regarding two things: the lap dance he gives the devil in his new music video “Montero (Call Me By Your Name),” and his sale of “Satan Shoes,” which allegedly have a drop of human blood in them. On those two topics, Lil Nas has drawn unsolicited commentary from everyone from South Dakota Governor Kristi Noem to basketball player Nick Young to conservative commentator Candace Owens.

At the same time, the video has drawn praise, and not just among those celebrating its proud embrace of LGBTQ imagery and themes. Another contingent has also excitedly rallied around the music video: historical scholars. “Montero,” across its three-minute runtime, is stuffed with Greco-Roman and medieval Christian motifs and messages in both Greek and Latin. Lil Nas, in an interview with TIME, says he wanted to deploy this type of iconography and symbolism to draw a connection between ancient and modern-day persecution. “I wanted to use these things that have been around for so long to tell my own story, and the story of so many other people in the community—or people who have been outcast in general through history,” he says. “It’s the same thing over and over.”

And scholars have come away impressed by the video’s attention to detail and conceptual sharpness; they say it is deeply researched and builds a powerful historical narrative that centers queerness in historical and religious spaces where it is too often erased. “Watching this video, I was a little bit shocked just because of how much knowledge you need to have to unpack some of these elements,” Roland Betancourt, a professor at University of California, Irvine and the author of Byzantine Intersectionality: Sexuality, Gender, and Race in the Middle Ages, says. “It says that institutionalization of homophobia is a learned thing—and that there are other origin myths available to us that are not rooted in those ideas.”

Read more: Lil Nas X on ‘Montero (Call Me By Your Name),’ LGBTQ Repression and the Influence of FKA Twigs

The Garden of Eden

“Montero,” which was co-directed by Lil Nas X and Tanu Muino, is composed of three acts. The first one takes place in the garden of Eden, where Lil Nas plays either Adam, Eve or some combination of the two. His character is tempted into sin by a snake, who also has Lil Nas’ face. “The story of the garden is a tradition that is historically misogynist,” Joseph Howley, an associate professor of classics at Columbia University, says. “It aligns women with evil; it aligns sexuality with women and with evil. Lil Nas is turning that on its head with the way that his character and the serpent interact.”

Betancourt also notes that Lil Nas’ snake resembles not just the serpent in most retellings of the Bible, but Lilith, Adam’s first wife from Jewish mythology. In the Middle Ages, many paintings were drawn of Lilith as a part-serpent, part-human demon who tries to tempt Adam into all sorts of bad behavior—including having sex on top of Adam, which is depicted in “Montero.” “Lilith still has this popular culture degree to her and is understood to still exist in the world,” Betancourt says; he cites the popularity of the character on TikTok, where videos tagged #lilith have accrued 193 million views. In recent TV shows, Lilith has been used as a symbol of revolt against the patriarchy. (And remember Lilith Fair?)

After Lil Nas’ Adam/Eve character gives into Lilith’s advances, the camera pans toward the tree of knowledge, which is inscribed with a Greek phrase that translates to: “After the division the two parts of man, each desiring his other half.” The phrase is taken from Plato’s groundbreaking philosophical text Symposium, and specifically from a passage delivered by Plato’s rendering of the playwright Aristophanes. The playwright recounts an origin story of mankind, in which humans were originally two bodies stuck together—some man and man, some woman and woman, and some man and woman. When the bodies were separated by angry Zeus, each one longed for their other half—which explains why we feel love and desire for different types of bodies.

The tree of life, inscribed with a passage from Plato's "Symposium," in Lil Nas X's "Montero."
YouTube / Columbia Records

“The passage speaks to a capacity to imagine an equal level of naturality to all of what we think of as sexual orientations,” Howley says. “It’s an early example of homosexuality and bisexuality represented as being familiar or acceptable in ways they are not always in our society today.”

Vanessa Stovall, a scholar of classical studies and ancient mythology, says that this passage of Symposium has long been a source of fascination and inspiration in queer spaces. In 1998, the passage was popularized further by the musical Hedwig and the Angry Inch, which tells the story of a genderqueer East German singer. In it, Aristophanes’ story is told through song by the eponymous main character in “The Origin of Love”; Neil Patrick Harris would go on to win the 2014 Tony for Best Leading Actor in a Musical for inhabiting the role on Broadway. (Lil Nas told TIME that he was not familiar with the musical.)

Stovall says that not only does Lil Nas’s usage of the quote place him in a lineage of queer scholarship and performance, but that he also expands the trope to adhere with a 21st century notion of self-love. Much of the imagery and symbolism both inside the “Montero” video and surrounding it deals with self-reflection and discovery: the song (and upcoming album) are called “Montero,” which is Lil Nas’ given name; he wrote a letter to a younger version of himself on Twitter; and the song’s cover art depicts him as both God and Adam in a take on Michelangelo’s “The Creation of Adam.”

“My and many people’s critique of this Aristophanes story is that we don’t need another person to be whole,” Stovall says. “So I love the idea of Lil Nas trying to find himself. There is a long history of this quote within classical and queer receptions, and a lot of interesting ways to take it—and I think he did a really, really cool one.”

As the song’s second verse begins, the video turns to the Colosseum, where Lil Nas emerges shackled in a Marie Antoinette-like wig. While Nas himself is human, the angry masses in the crowd are all seemingly made of stone, which perhaps indicates that the mob turning against him lacks independent thought.

Betancourt says the scene casts Lil Nas as a Christian martyr in the tradition of Roman Catholics getting murdered for their faith. (Many scholars have disputed the idea that such stonings happened in the Colosseum, but there is plenty of historical evidence of Christians being stoned to death in general—including St. Stephen in Jerusalem in 36 A.D.)

When Lil Nas starts to ascend to heaven, however, a crucial tweak is made: he is greeted not by St. Peter, but a male angel resembling the Greek mythological figure Ganymede. Ganymede, according to lore, was a boy whose beauty was so intense that Zeus turned into an Eagle and carried him to Olympus; he has long been a symbol of homosexuality, including in Shakespeare’s As You Like It. “In this moment of Christian ascent, you have this very queer iconography and this early example of representation of same-gender desire in antiquity,” Betancourt says. “I see that scene of salvation as not that he’s going to heaven, but rather having a same-gender consummation that is legitimized by Pagan gods.”

Before Lil Nas can reach Ganymede, however, a pole emerges from below; Lil Nas’ fingers curl around it, and he sails downward to hell. At the bottom, he lands in a red and black landscape that Betancourt says is indebted to both gothic traditions of architecture that were omnipresent during the rise of medieval Christianity and Disney’s more recent conception of the Middle Ages in films like Maleficent. As Lil Nas walks up to the devil on his throne, he passes a phrase in Latin that states, “They condemn what they do not understand.”

Betancourt reads the scene not as evidence of devil worship—as many detractors are claiming—but actually a critique of Christianity itself and its repressive nature. “To me, the narrative here is that Christianity takes over and suddenly you are going to be martyred for your sexual desire,” he says.

Betancourt also points out that in the Middle Ages, when Christianity was rising across Europe, the church’s relationship to homosexuality was more ambivalent than it is now. He references historical texts about individuals who were assigned female at birth but became monks in all-male monastic communities, as well as “brother-making” rites which bound two men in a marriage-like unions. “Homophobia wasn’t always the central tenet of Christianity,” he says. “As a medievalist, modern Christianity seems utterly foreign to me.”

While some scholars are looking at “Montero” through the lens of centuries, others see it continuing a more recent tradition: rock and roll. Steven Fullwood, the co-founder of The Nomadic Archivists Project and a scholar of Black LGBTQ history, says that the intense blowback to the video from Christian and other traditional establishments reminds him of the reaction to previous Black rock artists who subverted ideas of masculinity. “When people say, ‘we need to protect the children,’ it’s a lazy distraction from really looking at rock and roll, at people being rebellious,” Fullwood says. “Your kid’s first influence is going to be the culture that they grew up in and the education that they got. It’s not Lil Nas X; it wasn’t Little Richard; it wasn’t Prince. They hate whatever is counter to the idea of a particular kind of white, heterosexual male sensibility.”

On Twitter, the video has been embraced by many in the LGBTQ community. “Lil Nas X’s authenticity is generations in the making,” the transgender rights activist Raquel Willis wrote.

Meanwhile, the aforementioned scholars said they all see plenty more intertextual allusions to modern and antique touchpoints laced through the video—whether to Tony Kushner’s Angels in America, John Milton’s Paradise Lost, Lady Gaga’s “Judas,” or the Colossus of Constantine. Howley, who teaches the introductory Literature Humanities course at Columbia, says that if he weren’t on sabbatical this year, he would have showed the video in class this week. ” It would be the first thing we did in class today; we could talk for at least an hour about it,” Howley says. “I’m always here for new treatments of motifs that are prominent and have longstanding authority in our culture.” 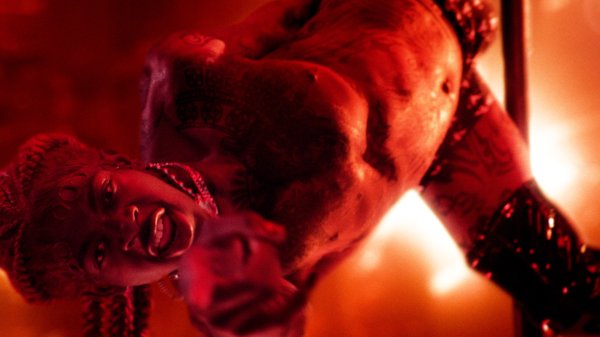