Lil Nas X on 'Montero (Call Me By Your Name),' LGBTQ Repression and the Influence of FKA Twigs

Lil Nas X in the music video for "Montero (Call Me By Your Name)."
Columbia Records
By Andrew R. Chow

When Lil Nas X released the music video for his new single “Montero (Call Me By Your Name)” on Friday, social media quickly flooded with responses both euphoric and scathing. The provocative video shows Lil Nas in various mythical, religious and historical settings, including one in which he gives a lap dance to the devil before killing him and putting on his horns. The video has been seen 34 million times on YouTube since its release, and Lil Nas’ name was trending on Twitter all weekend. On that site, some praised him for his artistic vision as well as his unbound expression of queerness; others labeled the video Satanic or sacrilegious, and pledged to boycott his music.

Lil Nas says this range of impassioned responses is exactly what he had hoped for. “I feel like we’ve come to a time in music where everything is nice and nothing is really cutting edge or starting conversations any more,” he told TIME in an interview on Friday evening. “I want to be part of a conversation that actually applies to my situation and so many people that I know.”

Specifically, Lil Nas hopes the video, which uses classical imagery to tell a story of sin, banishment and redemption, will open up a dialogue about the continuing omnipresence of repression among LGBTQ youth, particularly within Christian spaces. “I grew up in a pretty religious kind of home—and for me, it was fear-based very much,” he tells TIME. “Even as a little child, I was really scared of every single mistake I may or may not have made. I want kids growing up feeling these feelings, knowing they’re a part of the LGBTQ community, to feel like they’re O.K. and they don’t have to hate themselves.”

Lil Nas X’s self-presentation in “Montero (Call Me By Your Name)” is a stark contrast from his persona when “Old Town Road” stormed into the public consciousness two years ago. When that song first hit number one on the Billboard Hot 100 in April 2019, Lil Nas had not yet come out to anyone; he was still singing about cheating on a female partner and “bull riding and boobies.” In an interview with TIME later that year, he said he had been taught from a young age that homosexuality “is never going to be O.K.”

Read more: Inside the Record-Breaking Rise of Lil Nas X

But Lil Nas came out during pride month in 2019, and since has been experimenting with presentations of queerness and gender that are extremely rare for a mainstream male pop star of his stature. Last Halloween, he dressed up as Nicki Minaj; on his November single “Holiday,” he slipped in a lyric about being a “bottom on the low.”

In the music video for “Montero,” he goes even further: he makes out with himself while playing both a snakeskin-wearing version of Eve and a humanoid serpent in the Garden of Eden; dons a Marie Antoinette-like wig and outfit while getting stoned to death at the Coliseum; and descends to hell on a stripper pole before delivering a graphic strip tease, wearing only Calvin Klein boxers, to the devil. “I’m not fazed, only here to sin/ If Eve ain’t in your garden, you know that you can call me when you want,” he sings.

“Given the moment we live in when individual freedoms are being challenged through things like voter suppression laws, it feels good to see a young Black gay man flout conventional and social norms in the face of so much nonsense,” Steven Fullwood, the co-founder of The Nomadic Archivists Project and a scholar of Black LGBTQ history, says. “I think Black LGBTQ life has been outlawed in general. For the freedom-seeking folks, here’s an example of a freedom-seeking artist.”

Lil Nas shot the video in February, co-directing it with the rising Ukrainian film artist Tanu Muino, who also directed Cardi B’s current number one hit “Up.” “It took a lot for me to come out of my comfort zone and do these things in front of an audience of people,” Lil Nas says.

But while performing such a public strip tease might have been an uncomfortable act for him, Lil Nas says he has become emboldened over the last year to express himself more freely. “Throughout quarantine, I’ve kind of grown into myself a lot more. I’ve become a much more confident version of myself, and very much more determined and intentional on every single thing that I do,” he says.

In conceptualizing the video, Lil Nas drew inspiration from recent cultural touchpoints, including Spongebob Squarepants, which he frequently posts memes of online; the queer romantic drama Call Me By Your Name directed by Luca Guadagnino; and the FKA twigs music video “Cellophane.” In the latter video, the singer, dancer and artist twigs also reaches upward toward a celestial, winged being before descending down a long pole into a purgatorial-like space. “I wanted to see some things people have done in music videos with the pole—and I felt like twigs did a really amazing job at that,” Lil Nas says. “I wanted to do my own take on it.”

Questions around the video’s influences

Some people, however, said after the release of “Montero” that its pole segment hewed too closely to twigs’, and accused him of plagiarism. One of the people bothered by the two videos’ visual and conceptual overlaps was Andrew Thomas Huang, who himself directed twigs’ “Cellophane” video. Huang says that when he watched “Montero” for the first time, “the similarities were shocking.” He posted a message about the two videos’ similarities to his Instagram stories on Saturday.

“It put into perspective how small, indie artists like me and twigs don’t really don’t make a lot of money, and our platform is limited because we’re trying hard to make challenging work,” Huang tells TIME. “When someone who is commercially successful makes work that lives so similarly next to ours and profits from it on such a massive scale, then I felt like I had to speak up.”

Huang, who has directed videos for Björk, Perfume Genius and others, says he was particularly incensed by the similarities given that he himself was tapped by Lil Nas’ label Columbia Records to possibly direct “Montero.” “I was excited because I like Lil Nas,” Huang says. “Then they went silent and said they pivoted away.”

While Huang is hurt by the fact that the video seems to ape his video with FKA twigs, he makes clear that he does not place the blame on Lil Nas X himself. “I think twigs and Lil Nas are both doing important work. The question is, who benefits from their work? The answer is record labels,” Huang says. “The anger it stokes between artists just increases divisions between underrepresented artists. So I think there’s something larger and systemic here at work.”

In an Instagram post on March 30, FKA twigs defused the controversy on Instagram, writing, “thank you @lilnasx for our gentle honest conversations and for acknowledging the inspiration cellophane gave you and your creative team in creating your iconic video! i think what you have done is amazing and i fully support your expression and bravery in pushing culture forward for the queer community. legend status.”

A representative for Columbia Records declined to respond to TIME’s request for a reaction to Huang’s comments and also declined to make Lil Nas X available for a follow-up interview.

“More open-mindedness amongst humanity as a whole”

Lil Nas spent the weekend gleefully clapping back against other detractors on Twitter who were fixated on Lil Nas’ alleged Satanic connections, including the conservative commentator Candace Owens, the basketball player Nick Young and South Dakota Governor Kristi Noem. Many were particularly aggrieved by Lil Nas’ announcement of the sale of “Satan Shoes,” which are modified Nike Air Max 97s that supposedly contain a drop of human blood. (Nike denied involvement with their creation in a statement.) After Noem tweeted in regards to the shoes that “We are in a fight for the soul of our nation,” Lil Nas responded: “Ur a whole governor and u on here tweeting about some damn shoes. do ur job!”

Lil Nas also posted a screenshot of a text sent to him from his father—which read “live life your own terms. Very PROUD of you”—and announced that his debut album, also called Montero, would arrive this summer.

While the discourse has veered all over the place—to include Satanic worship, artistic theft and human blood—Lil Nas hopes that his younger fans watch his video and take away a message of “more acceptance, more open-mindedness amongst humanity as a whole. I want kids,” he says, “to know that they don’t have to harm themselves—and that they’re capable and worthy.” 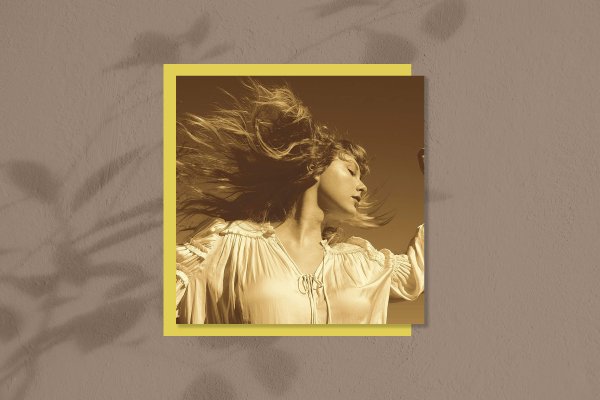 Here’s Why Taylor Swift Is Re-Releasing Her Old Albums
Next Up: Editor's Pick