By Janell Ross/Minneapolis and Melissa Chan

Derek Chauvin’s murder trial began Monday in a landmark moment for the nationwide reckoning on race sparked by George Floyd’s death, with prosecutors saying the former Minneapolis police officer killed Floyd “without regard” and the defense saying Chauvin’s use of force was necessary to restrain a man who overpowered him.

Behind a piece of plexiglass in a tightly fortified court, prosecutor Jerry Blackwell told the jury of six men and nine women, who include two alternates, that Floyd, a Black man, was defenseless and unarmed as he was writhing on the ground in pain while Chauvin, who is white, kneeled on Floyd’s neck and back for more than nine minutes on May 25, 2020.

“He put his knees upon his neck and his back, grinding and crushing him, until the very breath,” Blackwell said before playing the viral footage of Floyd’s death in the courtroom. “Until the very life was squeezed out of him.”

A masked Chauvin took notes in the courtroom as Blackwell told the jury the trial was not about every police officer or about policing in general. The prosecutor said police officers have difficult jobs, sometimes having to make life-or-death decisions in a split second. But, he said, “this case is not about split-second decision-making.”

Blackwell said Chauvin betrayed his badge when he deliberately remained on Floyd’s neck even though the 46-year-old handcuffed man on the ground verbalized 27 times that he couldn’t breathe. As Floyd cried out for his mother and came to the conclusion that he might die, Blackwell said Chauvin remained unmoved, his sunglasses still “undisturbed” on his head.

Read More: What to Know About the Trial of Derek Chauvin

Chauvin’s attorney, Eric Nelson, told jurors to consider the “totality of the circumstances” that led to Chauvin’s encounter with Floyd, saying that the incident began when Floyd paid for cigarettes with counterfeit money and that a 911 caller thought Floyd was drunk. During a struggle, the defense attorney said, three Minneapolis police officers couldn’t overpower Floyd, who, at 6’3 and 223 lbs. was taller and heavier than Chauvin.

Floyd put drugs in his mouth before his arrest, Nelson told the jury, adding that Chauvin did not cause Floyd’s death. “This case is clearly more than about 9 minutes and 29 seconds,” Nelson said. “Derek Chauvin did exactly as he was trained to do.”

Chauvin has been charged with murder and manslaughter. Nine white jurors, four Black jurors and two who are multiracial will decide his fate.

During the next few weeks of testimony, prosecutors will call to the stand medical and use-of-force police experts as well as leaders in the Minneapolis Police Department, for which Chauvin, a 19-year veteran, worked until May 26, 2020. Several bystanders will testify, including two who are or were minors at the time of the incident.

The first three witnesses testified on Monday, including Donald Williams II, a 33-year-old bystander who pleaded multiple times for Chauvin to ease his chokehold on Floyd and then to check Floyd’s pulse. “I was the most vocal person out there pleading for Floyd’s life,” he testified.

Williams, an MMA fighter, explained different types of chokeholds. When asked to identify the defendant in the courtroom, he angrily stared down Chauvin and appeared frustrated while watching the footage of Floyd vocalizing his anguish.

Other witnesses included Jena Scurry, a Minneapolis 911 dispatcher, who said she called her sergeant when she was concerned something was off about the arrest. “You can call me a snitch if you want to,” she said in the phone call, which was played for the jury. Scurry, who has been a 911 dispatcher for nearly seven years, said it was the first time she felt compelled to alert a sergeant to use of force.

The second witness, Alisha Oyler, recorded the encounter on her cell phone while she was working across the street. The 23-year-old bystander said the scuffle caught her eye and that she started filming because she felt it was “wrong” that police were “messing with someone.”

The trial comes nearly a year after Floyd’s death sparked global outcry and widespread demonstrations against police brutality and racial injustice, leading to the largest sustained social justice mobilization in modern U.S. history. Shortly before opening arguments began, Benjamin Crump, one of the lawyers representing George Floyd’s family, walked into the media scrum just across a grassy knoll from an entrance to the Hennepin County Government Center, which houses the courtroom where Chauvin is being tried.

What happens inside that courtroom will amount to “evidence of whether America will live up to the Declaration of Independence,” Crump said, referencing a passage almost every American school child can recite. “Do we believe that all men are created equal or not?”

He recited the names of multiple Black people killed by police in the past year in a country where, Crump noted, people want to believe that marginalized communities have equal access to justice.

The previous night, Crump had joined others in a prayer rally for the Floyd family at which dozens of cases of Black Americans subjected to police brutality over the decades were noted. Few of those cases resulted in criminal charges, and a fraction of them led to convictions, even if the incidents were captured on camera as in the case of Rodney King’s beating by Los Angeles police officers in March 1991.

“Make no mistake, there were videos before,” and justice in the courtroom did not follow, the Rev. Al Sharpton, in Minneapolis for the trial’s opening, said.

Outside the government center, Sharpton, Crump and several members of the Floyd family and legal team along with activists kneeled for nearly nine minutes to illustrate what Crump described as the torturously long period that Chauvin’s knee remained on Floyd’s neck. That act, prosecutors argue, was a cause of Floyd’s death.

“Today starts a landmark trial that will be a referendum on how far America has come in its quest for equality and justice for all,” Crump said, adding, “this murder case is not hard.” Justin Miller, a lawyer who represented George Floyd’s daughter in the $27 million civil settlement reached in March between the city of Minneapolis and Floyd’s family, agreed.

A demonstrator holds a sign outside the Hennepin County Government Center in Minneapolis on Monday, March 29, 2021., as Derek Chauvin's trial began in a courtroom inside
Emilie Richardson—Bloomberg/Getty Images

“George Floyd didn’t die..he was murdered,” said Miller. “And when a person is murdered there must be justice. There must be retribution.”

Few have missed or failed to describe the Chauvin trial as a critical moment and an inflection point in American history. If Chauvin is convicted, the trial will make history in a city whose police department has a long history of racist incidents and a long history of police officers not being held accountable. If he’s acquitted, that would make it difficult, if not impossible, to gain convictions of any of the other officers involved and could ignite a new surge in nationwide protests.

“Make no mistake,” Sharpton said. “Chauvin is in court, but America is on trial.” 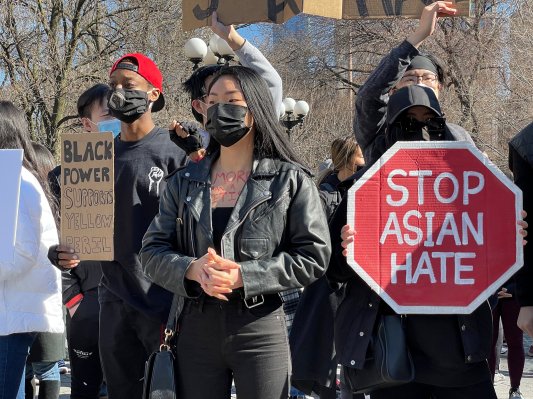 How Black-Asian Solidarity Is Taking on White Supremacy
Next Up: Editor's Pick