Trash bags pile up in Manhattan in January.
Thomas Prior
By Alana Semuels

Across the country, as the weather improved and pandemic lockdowns were lifted, Americans ventured outside and noticed that their neighborhoods looked a little different.

They saw mattresses piled outside cemeteries and disposable masks clogging the gutters. Vacuum cleaners left in the woods, fast food wrappers blowing on the highway, piles of tires. Neighborhoods that had been relatively clean before the pandemic were now full of litter.

“There is garbage freaking everywhere,” says David Biderman, the executive director and CEO of the Solid Waste Association of North America (SWANA).

In Portland, Ore., the city picked up more garbage in 2020 than any other year on record: 3,000 tons, 50% more than the previous year. Additionally, requests to clean up trash and remove graffiti were up 300% over 2019. Norfolk, Va., is seeing “historic highs” in litter and illegal dumping, according to Sarah Sterzing, the program manager of Keep Norfolk Beautiful. Reports to Keep Pennsylvania Beautiful of illegal dumping were up 213% in 2020 over 2019.

Read More: National Parks Are Getting Trashed During the Pandemic, Endangering Surrounding Communities

There were 24 billion pieces of litter alongside highways, and 26 billion pieces of litter along waterways in 2020, according to data compiled by the nonprofit litter prevention group Keep America Beautiful and shared exclusively with Time. While this is actually less litter than a similar survey counted in 2009, it does not include litter in places like public parks and neighborhoods, where pedestrians were most likely to exercise and socialize—think hikes, picnics and street parties—when the pandemic made it virtually impossible to take part in such activities indoors. Keep America Beautiful has received a number of complaints about litter shifting from downtowns to neighborhoods, says David Scott, senior director of research. (As people shift to socializing outside, other countries including the United Kingdom, Canada, and Jordan are seeing a litter problem too.)

A few factors are driving the rise in trash. In some cities like New Orleans, budget cuts have reduced sanitation department staff, so they’re able to do fewer curbside trash pickups. In other cities like Baltimore, high rates of COVID-19 among sanitation workers reduced the number available to pick up trash, so they stopped collecting bulk trash, suspended street sweeping, and temporarily stopped cleaning vacant lots. This comes at a time when more people are home because of the pandemic and creating more residential garbage than in the past. The amount of residential waste that haulers are collecting is up about 5-8% from the same time the previous year, according to SWANA.

Bags of garbage sit along the street before being picked up in Philadelphia's Ogontz neighborhood on May 13, 2020.
Tim Tai—The Philadelphia Inquirer/AP

Delays in collecting growing amounts of trash allow debris to blow into the street and become litter. “When the volume of material placed on the curb is more than anticipated, collection gets delayed and the haulers can’t finish the route,” says Biderman.

People are also creating more waste at home. They’re buying single-use personal protective equipment like gloves and masks—Keep America Beautiful estimates there were about 207 million pieces of PPE litter on the ground at any given time in late 2020. They’re getting takeout from restaurants where they once might have gone in and eaten off washable plates, and then they’re throwing wrappers and plastic forks out the window. States that banned single-use plastic bags lifted those bans during the pandemic, and demand for single-use plastics went up once again.

Although some of the increases in residential trash at home are offset by decreases in trash in commercial settings like office buildings, that isn’t the case everywhere. In Ohio’s Montgomery County, public waste was up 5.7% while commercial waste was down 0.6%, but the county still collected more waste in total than it did in 2019 or 2018. In New York City, local politicians and owners of small businesses said rats drawn by overflowing garbage were deterring customers, making it even harder for business people to recover after months of lockdowns.

Programs that existed to pick up litter were suspended or cut during the pandemic. Departments of Corrections suspended programs where prisoners picked up trash by the side of the road. And community-based cleanup events were canceled to avoid large gatherings. When Sterzing, the manager of Keep Norfolk Beautiful, attempted to do cleanups herself in the absence of volunteers, she says she “was getting carpal tunnel” from picking up the piles of garbage across from her local pharmacy.

But there’s another factor too: people seem to have given up on many things during their isolation. That includes cleaning up after themselves. “It’s like, ‘life sucks, I’ll just throw this out the window,’” says Juliann Lehman, the director of Keep Gastonia Beautiful in North Carolina, where the city council recently doubled fines for littering because there’s been such an increase. “We’ve all got these COVID bellies, you just kind of give up a little bit.” Lawmakers in North Carolina in February introduced a bill that would double the fines for littering on state highways.

Once people leave a piece or two of trash on the ground, the behavior can quickly become contagious. “It’s simple human nature—you want to follow the rules, but if you see other people breaking them and not getting punished, you stop too,” says Robert H. Frank, a Cornell University economist and author of the book Under the Influence: Putting Peer Pressure to Work. “If you see a lot of trash strewn about, that makes you more likely to litter too.”

The behavior isn’t limited to litter. Illegal dumping has increased in a number of cities during the pandemic as people try to figure out how to dispose of things like tires or broken refrigerators without paying a fee. In Portland, that’s meant a bump in bulky waste around the city.

Read More: The ‘Toilet Paper Angels’ Tackle the Dirty Job of Cleaning Up National Parks in the Pandemic

People also stopped being careful about how to dispose of their recycling during the pandemic. Recycling depends on haulers collecting and separating things like cardboard, glass and plastic so they can repackage and sell those items, but many recycling programs saw more contamination in their waste streams as people tried to recycle jars full of food or put clothes in the recycling instead of the trash. About one-third of recycling in Monterey, Calif. was contaminated in 2020, up from 22 percent the year before. Contamination increased by 41 percent in Indianapolis during the pandemic. About 100 cities and towns, including Montclair, N.J., and El Paso, Texas, suspended curbside recycling during the pandemic. Gastonia, North Carolina suspended its recycling program because contamination was so high. Philadelphia collected 20 percent more trash in 2020 than in 2019, but 34 percent less recycling, according to the city’s Streets Department.

“We may be in a new place where there’s not necessarily the intestinal fortitude to take the extra effort to dispose of things in the right way,” says Brian Love, a professor at the University of Michigan who has looked at why recycling programs disappeared during the pandemic.

For some environmentalists, the rise in litter and contaminated recycling illustrates that individuals shouldn’t be expected to figure out how to dispose of goods once they’re done with them. Manufacturers should be responsible for collecting products that are difficult to recycle or throw away, environmentalists say—products like paint or mattresses or plastic bags. “Without financial incentives and penalties that control waste generation and packaging production, excess waste and litter is the obvious result,” says Scott Cassel, the founder of the Product Stewardship Institute, a nonprofit that focuses on reducing the environmental impacts of consumer products. “We need to require producers to take greater responsibility for the packaging they put on the marketplace.”

Garbage in an overflowing receptacle in New York on Feb. 23, 2021.
Richard B. Levine—Sipa USA

Democrats introduced a bill on the House and Senate floor Thursday that aims to do just that. The Break Free From Plastic Pollution Act would require consumer brands to pay to collect and recycle the waste left behind by their products. It would also impose a fee on carryout bags and require certain non-recyclable single-use plastic products to be eliminated from the waste stream. A similar bill introduced last year did not make headway in Congress.

In the meantime, local governments are scrambling to deal with the increased litter with reduced budgets. South Carolina, which saw a “dramatic increase” in litter in roads across the state, is spending $2 million a year to pay for private contractors to clean its roads, the first time it has done this. (The state, like many others, had relied on prison labor to clean up litter previously but suspended that program because of the pandemic.) The problem isn’t just that litter is unsightly; it can also clog drains and get into waterways, which costs governments money to clean up. New York City announced a pilot program called Clean Curbs aimed at keeping residential trash, which currently is placed on sidewalks in plastic bags until sanitation crews pick it up, off the streets. One element of that program unveiled during the pandemic involves getting neighborhood groups to build sealed containers to hold the trash.

As they await state and local funds from the recent stimulus bill, other places are coming up with new ways to fund litter control. The volume of garbage and litter on Portland’s streets exploded during the pandemic, the mayor’s office told me, as did illegal dumping and garbage near homeless encampments. Now the city is launching a cleanup initiative that will be led by former mayor Sam Adams. Portland isn’t paying for the initiative, though—city leaders figured the government couldn’t stop the dumping alone. They’re turning to private citizens for money for a program that will try to motivate Portland residents to clean up their city. 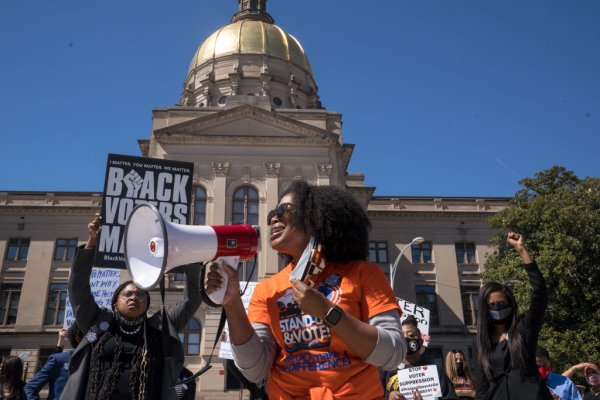 Georgia Enacts Sweeping Changes to Its Voting Law
Next Up: Editor's Pick