Joe Biden Should Make National Service the Cornerstone of His Legacy. Here's How He Can Achieve That

President Joe Biden delivers remarks on the implementation of the American Rescue Plan at the White House on March 15, 2021.
Gripas Yuri—Abaca/Sipa USA
Ideas
By Stanley McChrystal
McChrystal is a former Army General, founder of the McChrystal Group, the founding chairperson of Service Year Alliance, and a co-chair of the Serve America Together campaign to make national service part of growing up in America.

In times of crisis, America’s leaders have historically relied on national service to recover and rebuild. During the Great Depression, President Roosevelt created the Civilian Conservation Corps mobilizing millions of unemployed Americans. After 9/11, President Bush expanded AmeriCorps and the Peace Corps. Now, amid the worst public health crisis in our lifetime, President Biden has signed the largest investment in national service in decades.

Meanwhile, the state of American democracy feels fragile. The United States is among the 25 countries with the most significant declines in freedom over the past decade, according to a Freedom House report released this month. Moreover, the proliferation of divisiveness and disinformation — culminating in the brutal attack on the Capitol on January 6 — has further weakened our democracy.

To solve these foundational problems, we need long-term solutions. Investing in universal national service — engaging one million young Americans annually in paid, full-time civilian national service — is the most important strategy we can implement to ensure the strength and security of our nation. It’s an investment in our democracy and in one another as citizens.

The American Rescue Plan, which provides urgently needed relief to families across the country, includes $1 billion for national service. That is a significant step, but it isn’t enough to achieve a long-term recovery for our economy or our democracy. Right now, there are only 65,000 national service opportunities available to Americans. We need to change that. Every American who wants to serve should have the opportunity to do so.

To achieve this vision of one million young people serving, we not only need a significantly larger investment in national service — we need the effort to be spearheaded by leadership in the White House. As a lifelong public servant, President Biden has an opportunity to make national service the cornerstone of his legacy and become the Service President. The Serve America Together campaign, of which I am a co-chair, is spearheading this effort by outlining what it means for the Biden Administration to lead on national service.

By calling young people into national service, President Biden will not only be prioritizing the strength and health of our democracy, but he will also be advancing the goals of his Administration. National service can provide economic opportunity while preserving the planet for the next generation, create a more informed public that rejects misinformation and demagoguery, and strengthen cohesion of the American citizenry. Plus, 77% of Americans — including majorities of both Democrats and Republicans — want Congress to pass legislation that would expand national service opportunities.

A key part of a strong democracy is building an inclusive economy and social mobility. But as we’ve seen this past year, the economic consequences of COVID-19 are devastating for young Americans, and even more dire for young Americans of color: The unemployment rate for those ages 20 to 24 in February 2021 was at 9.6% — 1.5 times the national rate.

At a time of unprecedented inequality, national service can help fuel economic recovery by teaching young Americans new skills and preparing them for careers through real life experience and professional development. Young people are specifically at the forefront of climate action, and their environmental stewardship through national service can be critical to our long-term national security and equity.

National service also has a track record of professional advancement. Eight out of 10 AmeriCorps alums say the program benefitted them in their career path, and a survey of AmeriCorps alums found that 24% of those who listed their service on their resume were asked to interview versus just 17% of those who did not list a service experience.

Additionally, a resilient democracy requires fact-based thinking and public policy. Leading by example, those public servants enlisted in Biden’s presidency must combat the rise of misinformation spread by politicians and across social media platforms. A nationwide call to service can seek to bring the light of truth to all corners of the United States. By fostering tolerance and trust and uniting people around a shared experience, national service can build a more informed and engaged public, which is critical to fighting misinformation.

As I learned in my 34 years in the U.S. Army, service teaches you to focus more on the things you have in common with others and less on the differences. Serving your country and seeing the impact of your work also creates a feeling of pride and responsibility that you take with you in your life after service. These civic lessons have a ripple effect throughout society, building the foundation for a stronger democracy.

If we want to defend against threats to our democracy, we need to start building a society where all Americans have an opportunity to serve alongside one another in common purpose. A service presidency for the 21st century can not only rescue our economy and restore civility but also usher in a new generation of leaders ready to tackle whatever crisis we face next. 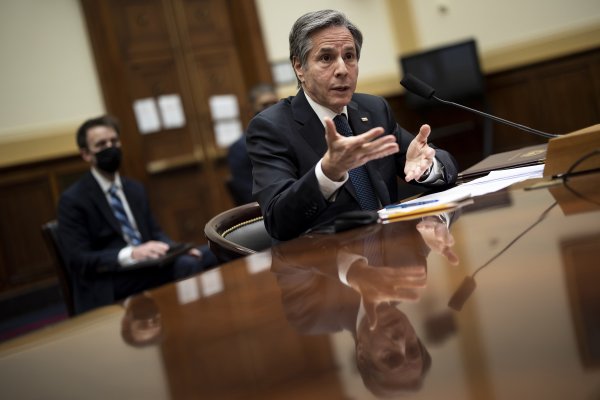 Biden Must Withdraw From Afghanistan by May 1
Next Up: Editor's Pick