Al Gore: Youth Activists Are Demanding Action Against Climate Change. It’s Time For Us to Listen

Ideas
By Al Gore
Gore served as the 45th Vice President of the U.S.
Harry Campbell for TIME

One of the important milestones in the struggle to build awareness of the climate crisis in the U.S. was the publication 30 years ago by TIME of its historic “Planet of the Year” issue, focusing the nation’s attention on our “Endangered Earth.” Prior to its decision to creatively adapt its Person of the Year brand to help mobilize public opinion in response to the unprecedented threat to the future of humanity, TIME organized a 1988 conference of climate experts and policymakers to review the rapidly accumulating evidence confirming the warnings of scientists years earlier. All who attended felt it was the most impressive conference yet held to explore what many realized for the first time was an existential crisis.

In the late 1960s, I experienced my own unexpected awakening to this planetary danger as an undergraduate in a college class taught by the legendary scientist Roger Revelle, who was among the first scientists to discover that human activity was adding more carbon dioxide to the earth’s atmosphere than nature could absorb. In 1965, Revelle had warned President Lyndon Johnson of the mounting crisis. Measurements made by Revelle’s colleague Charles David Keeling from the top of Mauna Loa on the Big Island of Hawaii showed clearly that the increased burning of fossil fuels was leading to a dramatic rise in the concentrations of CO₂ measurements in the atmosphere.

Seven years after that class, as a young, newly elected member of the U.S. House of Representatives, I asked what was being done about this emerging threat and found the most common answer was, “What threat?”

During my first-ever congressional hearing on this crisis, I asked Dr. Revelle to be the leadoff witness, naively hoping when he spoke, those listening would have the same epiphany I had as an undergrad. When that didn’t happen, I asked myself for the first time an urgent question that has preoccupied me ever since: How can this crisis be made as clear to our nation and to the world as Revelle made it to me?

Nearly 40 years later, although we have made a great deal of progress, we are not yet gaining on the crisis. It is still worsening faster than we are mobilizing to confront it. The evidence is now even more overwhelming, of course, and Mother Nature has joined the discussion. The U.N. Intergovernmental Panel on Climate Change recently issued its latest stark assessment, in which the world’s leading scientists warned we must undergo an urgent and rapid transformation of our civilization in order to avert the most catastrophic effects of a disrupted global climate system.

Humanity is now spewing more than 110 million tons of global warming pollution every day into the exceedingly thin shell of atmosphere that surrounds our planet as if it were an open sewer. The extra heat energy being trapped on earth and exacerbated by man-made climate change is now equal to what would be released by 500,000 Hiroshima-class atomic bombs exploding on earth every single day, according to James Hansen, a leading climate scientist. And the knock-on consequences of all that extra heat energy is leading to increasingly dangerous threats to lives and livelihoods all around the world.

The past five years have been the hottest five years recorded since the world’s top weather and climate agencies started tracking global temperatures in the 1880s. This past July was the hottest month ever in recorded history. More than 90% of the extra heat is going into the oceans, and it is fueling supercharged hurricanes. Hurricanes Harvey, Irma and Maria (all in 2017) caused as much as $265 billion in damages. Overall, weather disasters in 2017 and 2018 cost the global economy $653 billion­—the costliest back-to-back years in history. Wildfires are worsening around the world, including across the American West, while farmers in the Midwest have dealt with periods of both catastrophic flooding and drought that destroyed crops and threatened the economic health of communities. Sea levels are rising at an accelerating rate as the melting of land-based ice in Greenland and Antarctica increases to record levels. The list goes on.

But we must be on guard against despair, which is ultimately just another form of denial when the future of humanity is at stake. Yes, some losses are not recoverable. And yes, more damage is now inevitable no matter what we do. False hope is also a form of denial, but I remain optimistic that we still retain the ability to avoid the most catastrophic consequences of this crisis and save the future of humanity—if we rise to the challenge and act urgently.

Dejani Louistan, who was displaced by Hurricane Dorian, stands with the only belongings she managed to salvage amid the destruction left in the Mudd neighborhood of Marsh Harbour, Bahamas on September 7, 2019.
Carolyn Van Houten—The Washington Post via Getty Images

My hope stems largely from the recent, unprecedented groundswell of youth activism that has raised public consciousness to new levels and is pushing political leaders to develop bold and ambitious ideas to confront this challenge. Harking back to the great social movements in history—women’s suffrage, civil rights, gay and lesbian rights—youth activists are taking the lead. They are staging sit-ins at congressional offices, marching in the streets and protesting on college campuses. Above all, a growing number of students in many nations have been striking from school every Friday for more than a year to demand action on the climate crisis.

The movement has been led by a 16-year-old Swedish student named Greta Thunberg, who captured the world’s attention with a groundbreaking speech at the U.N.’s annual gathering of world leaders in Poland last year. Thunberg speaks with startling clarity about the threat her generation faces and how political leaders have failed the test of leadership. Her words and advocacy embody the moral authority of youth activists who will bear the burden of the decisions previous generations make today.

Youth activists have also been at the ground level of the Green New Deal resolution put forward by 29-year-old Representative Alexandria Ocasio-Cortez of New York and longtime champion for climate action Senator Ed Markey of Massachusetts. Many of the ideas included in the Green New Deal have been around for years, but they have never been packaged together with momentum rooted in the energy and fervor of a new generation of leaders. The Green New Deal has indisputably played a critical role in pushing the Democratic Party’s 2020 presidential candidates to propose concrete solutions to the issue at a scale that would have been unthinkable even just a few years ago.

Greta Thunberg at a "Fridays for Future" climate demonstration on March 29, 2019 in Berlin, Germany.
Michael Kappeler—picture alliance via Getty Images

The recent surge in youth activism, combined with the recent extreme weather related to the climate crisis, have underpinned a marked shift in public demand for action. According to the AP/NORC Center for Public Affairs Research, 71% of Americans agree climate change is happening. And among youth, there has been a striking change among Republicans: A 2018 Pew Research poll shows millennial Republicans are more likely to endorse centrist environmental positions.

One of the lessons of my years as a young member of Congress was that although change can sometimes come from the top, most often the biggest changes start at the grassroots level. Political leaders will pay attention if the calls to action are loud and persistent. Saving the future of humanity is a heavy burden for teenagers and 20-somethings to bear. But they are embracing the challenge as if their lives depend on it. The rest of us must follow their lead and act before it’s too late. 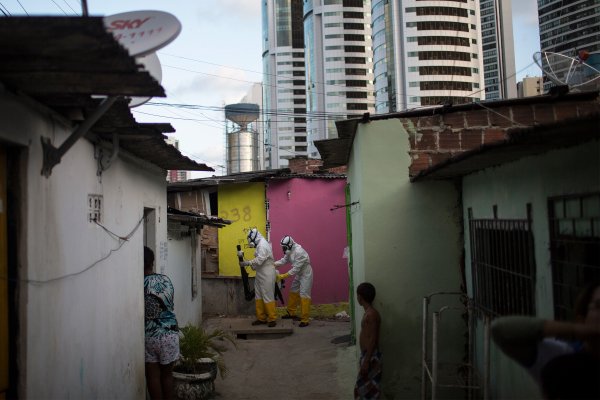