As of Monday, Feb. 22, 2021, the COVID-19 virus has claimed more than 500,000 lives in the United States, planting yet another grim milestone in a scourge that has wrecked misery in one of the most developed countries in the world. That equates to 1 in 658 Americans in just under a full year since the first reported death directly attributed to the novel coronavirus.

Realistically, the death toll of COVID-19 probably neared or surpassed the half-million mark by the end of 2020, based on the widely acknowledged likelihood that not every related fatality has been identified. But now, even going by the known tally, as compiled by the Johns Hopkins University Center for Systems Science and Engineering, the U.S. has reached this monumental figure.

It is also a reminder of the callous mathematics of epidemiology. Last September, TIME memorialized the passing of 200,000 Americans on its cover. Within weeks, there were clear signs of a coming third wave, soon to be followed by a steep rise in deaths—trends for death rates have typically mirrored those for cases, with a lag time of about 10 days. By the end of the year, the toll stood at more than 350,000.

Fast-forwarding to the present, cases and deaths in the U.S. have been on a steep decline since the winter holidays, though that trend is showing some signs of turning back upward—which is partially, though not completely, an artifact of a few states revising their figures to better account for both infections and deaths that initially went unreported. (Iowa recently reported 27,000 new cases, due to a new method of reporting, and Ohio recently added 4,000 overlooked deaths.)

As a blunt indicator of tragedy, today’s milestone is a reminder that, under the best of scenarios for the vaccine rollout, the number of deaths is likely to exceed that of the highest estimates for the Civil War, the deadliest military conflict in U.S. history. It is also a reminder that the pandemic has been far worse in the United States than anywhere else in the world by the sheer number of deaths. Even by a per capita tally, the U.S. is presently the 8th worst-struck country, behind only a few nations of remotely comparable population or infrastructure.

Looking ahead, reported COVID-19 deaths will be the yardstick by which we will soonest know whether the national vaccination campaign has succeeded. Cases, in this context, are not a very useful metric, given that the vaccines are authorized on the basis of their ability to prevent disease; there are some early data showing they also prevent the spread of the virus, but their efficacy on that front is still mostly unknown. As of this writing, 13.3% of the population has received at least the first dose of one of the two currently authorized vaccines, which is a significant accomplishment but still too scant to expect to see a significant decline in deaths.

Every morning, after 1 a.m., I run several computer scripts to download the latest figures on cases, deaths and vaccinations. Among the many ways to slice and dice these figures, one of the most obvious is the number of people who died on the previous day, one of the first figures I see crawl across the terminal. This figure fluctuates quite a bit from day to day, thanks to the vagaries of how and when cases are reported based on the day of the week. In 2021, that figure has been under 1,000 only once, last Monday, Feb. 15. The last time it was under that waterline previously was on Nov. 16. On Sunday, Feb. 21, it was 1,235. Only when far fewer than 1,000 Americans die from COVID-19 every day will we be capable of saying with any confidence that the end is in sight. 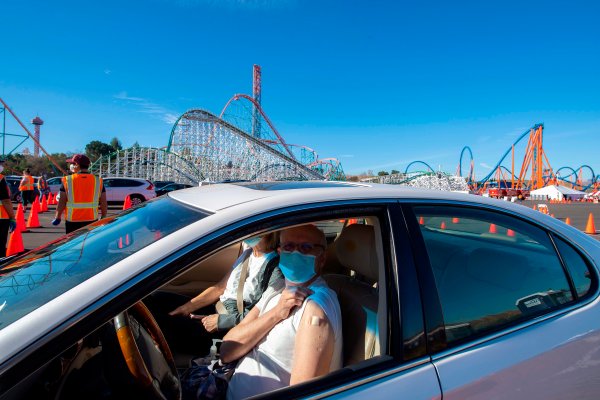