Keli Burns, 36, is a college administrator and married suburban Chicago mom. Online she posts about her son’s bowling skills and, for her daughter, reminders about Girl Scout cookie season. When Burns mentions her father, she describes herself as a daddy’s girl until he passed away suddenly when she was 18.

What she thought she’d never share is that in 2002, a Minneapolis police officer compressed her father’s neck until he died, less than two miles from where a different police officer pressed George Floyd into the pavement nearly 20 years later. The medical examiner ruled her father’s death a homicide. There was no trial.

“I’ve been contemplating if I was going to post this or not,” Burns wrote on Instagram in May 2020 as footage of Floyd’s death became public. She was sharing what only her husband and a few others knew. “But this one hit hard! This isn’t the first time Minneapolis police have done this!!….My father Christopher Burns died, just like this innocent Black male, killed in the hands of [Minneapolis,] Minnesota police in 2002.”

Read more: George Floyd’s Death and the Long History of Racism in Minneapolis

As the world awaits the trial of Derek Chauvin, the former officer charged with killing Floyd, some, like Burns, know that more often than not, justice eludes the families of those killed by police. Criminal charges for police officers are rare, and convictions extraordinary. In a typical year, about 1,000 people are shot to death by police in the U.S. From January 2005 to March 11, 2021, just 138 law-enforcement officers had been charged with murder or manslaughter for on-duty shootings, according to an analysis prepared for TIME by Philip Stinson, a professor of criminal justice who also directs the Henry A. Wallace Police Crime Database at Bowling Green State University. Of the 138 officers, 44 have been convicted. Stinson identified at least 10 additional officers charged because of choke-hold deaths between January 2005 and February 2021. One was convicted of civil rights violations and another of falsifying reports.

In the Burns case, police were responding to a loud argument at the apartment where Burns’ girlfriend was staying. Officers said they forced their way into the house after Burns insisted they weren’t needed. Lisa Burns, who was 3 years old, was in the room when her father died.

“Lisa said, and she doesn’t remember this [today],’They killed my daddy. They killed my daddy,'” Keli Burns recalls. Before the funeral, she says she learned that two of Burns’ teeth had been knocked out and bones in his neck broken.

As she would in multiple cases involving Black men killed by police in Minneapolis, Hennepin County’s then chief prosecutor, now Democratic Senator Amy Klobuchar, declined to use her power to indict. A grand jury also refused to indict.

It’s not an unusual scenario, and one reason may be that American juries often don’t look much like America. Patrick Bayer, an economist at Duke University, studies racial inequality and segregation. In his latest research, Bayer and his co-authors examined data from 2,400 felony trials conducted from 2005 to 2012 in Harris County, Texas, which includes Houston. They found that people from predominantly white and affluent suburban neighborhoods were overrepresented in jury pools, resulting in juries that looked little like the people living in and around the nation’s fourth largest city. They were more likely to receive jury summonses by mail because many didn’t move as frequently as lower-income renters, whose jury notices often went to outdated addresses. Overrepresentation from those suburban ZIP codes increased the median sentence handed down to Black defendants by more than 50%, the research concluded.

In Hennepin County, which includes Minneapolis, white Americans made up 68% of residents according to the most recent Census data, but 80% of the jury pool in fiscal year 2020. Black residents were 13.8% of the population but 8.2% of the jury pool.

Finances also contribute to the racial disparity, says Andrew Gordon, a defense lawyer in Minneapolis and deputy director of Community Legal Services at the Legal Rights Center, a nonprofit law firm. Jurors get $20 a day for their service, and most states, including Minnesota, don’t require employers to pay workers on jury duty. “It doesn’t put food on the table and it doesn’t pay rent,” Gordon says of the daily stipend. “If you have ever been to downtown Minneapolis, that may not even cover your parking.”

Chauvin’s lawyers have a difficult challenge. They must explain Chauvin’s refusal to remove his knee and render first aid. There is also Chauvin’s flat affect during Floyd’s final moments.

Prosecutors face an arguably more complex task. To convince 12 jurors that Chauvin acted unreasonably or with insufficient regard for Floyd’s life, they must also accomplish what the video of his death did for those who protested: get the white people on the jury—who are more likely to describe their encounters with police as positive—to sympathize with a large Black man rather than the officer confronting him.

“Those are skills they [prosecutors] don’t necessarily have,” says trial consultant Diane Wiley. “They are usually on the side of police.” Wiley is president of the National Jury Project, a firm founded after she and colleagues consulted on a 1974 trial involving Native American activists Russell Means and Dennis Banks, who occupied Wounded Knee, S.D. (A judge eventually dismissed the charges.)

Wiley has seen few prosecutors who can get white jurors past stereotypes about danger and race. In the Chauvin trial, even though Floyd is the victim, it will be no small task.

“In this country,” says Gordon, “part of the constructs and narratives of being a Black man is that you have superhuman strength. You are capable of hurting people not because you are fighting or resisting, but Black.” Gordon doubts the defense will say that so plainly. Floyd’s drug use, criminal record and size will be the story told. “No one on the defense has to say it,” says Gordon. “They can let it [the stereotypes] do their unconscious work.”

In police trials, dueling expert testimony is often presented. In the Chauvin case, there are autopsies with different findings, and the disputed concept of “excited delirium” has already surfaced in pretrial paperwork. The condition and its ability to cause sudden death in agitated people is often the basis of officers’ claims that overwrought individuals had to be restrained with great force, for their own good.

For Christopher Burns’ 82-year-old mother Ann Burns, the Floyd case is “just like a nightmare reappearing.” The experts said Christopher Burns, 44, was combative and violent, and had to be contained. The family was told her handcuffed son reached for an officer’s gun, prompting them to put him in a choke hold–a maneuver Minneapolis police finally banned last June. To her, the police version made no sense. It still doesn’t. It is among the reasons Keli Burns began talking to her son about policing and racism when he was just 8 years old.

Ann Burns’ house is sprinkled with pictures of Christopher: graduating from high school, in his 20s holding baby Keli, at family gatherings in his 30s and 40s. He was a reliable son and a certified nursing assistant who helped care for his father after a stroke, his mother says. He was a dad who taught Lisa how to ride a bike and drive a car, she says. The last time she saw him, he was boarding a bus in Chicago, where he’d been living, taking “Little Lisa” back to her mom in Minneapolis.

Minneapolis paid Burns’ family $300,000, but it wasn’t the justice they wanted. The officer involved in Burns’ death, Lucas Peterson, is still on the force. He has been named in at least 12 other excessive-force settlements.

“That’s why I have to pray,” says Ann Burns. “I have to pray that justice will be done for any other case that comes up, for anybody else that has to go through this, and for peace of mind so that I will be able to sleep at night.”

–With reporting by LESLIE DICKSTEIN 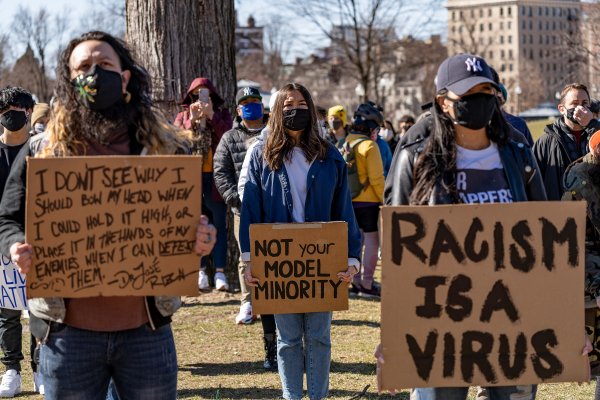 A Love Letter to Asian Americans
Next Up: Editor's Pick