Oscar-Nominated Documentary Collective Is a Gripping Story of Investigative Journalism

About five minutes into Alexander Nanau’s extraordinary documentary Collective, we see amateur footage of a hardcore band finishing up a song on a club stage. As the lead singer fields the audience’s applause, he notices something we can’t yet see. “Something’s on fire here,” he says rather calmly, an alert for someone to take action. “This isn’t part of the show.” It’s only a matter of seconds before a blaze that almost doesn’t register as fire—it’s more like a vaguely glowing picture frame—lashes up the walls and across the ceiling just behind the stage. The audience members panic and run for the exit—there is only one way out.

The horrific chaos captured on the video is mercifully brief, but Nanau has already given us some sense of the terror of the event: On Oct. 30, 2015, this fire—in a Bucharest club called Colectiv—killed 27 people immediately, and injured another 180, 37 of whom would die later while hospitalized. Furious that any club would be allowed to operate without fire exits, Romanian citizens protested, forcing the country’s prime minister to resign. A new, politically appointed government took office, with a term of one year—but that’s barely even the beginning of this story.

Collective is about survivors, about the purpose of journalism, and about what can happen when a bureaucrat pushes for change from within the system. It was one of the finest films released last year, and though it has been available to stream for several months (and becomes available to stream on Hulu on March 25), it’s easy to see how it could slip through the screening schedule of even the most astute home viewers: documentaries wrought from tragedies aren’t the sort of thing most of us seek out, especially during a stressful pandemic. But Collective—which has been nominated for Oscars in two categories, Documentary Feature and International Feature—deserves our attention. Though it doesn’t wrap up with anything close to a happy ending, it’s more galvanizing than it is despairing. And even though the events it addresses happened in Romania, they could take shape in almost any country in the world. The audience for Collective is anyone who believes in holding governments accountable for their actions, and in seeking change when a system has failed them.

One problem with social-issues documentaries is that you almost always know where they stand, and where they’re headed, from the start. But Collective is as tense and as taut as a great fictional drama. It begins with journalists investigating not the cause of the Colectiv blaze, or even the governmental negligence that allowed it to happen. Rather, it’s set in motion by the hospital deaths of those who were being treated for their injuries after the incident. A journalist for a weekly sports newspaper, Catalin Tolontan—perceptive, cranky, always eager to ask the tough question in a press conference—pulls one small thread and unravels a whole figurative sweater: It turns out that the hospitals treating the Colectiv victims were using a disinfectant that had been watered down, to dangerous levels, by its manufacturers. The hospitals were further diluting the formula, rendering it almost useless and leading to fatal infections that never should have happened. Hospitals had been accepting bribes from the disinfectant’s manufacturer, and the government knew about the whole charade. The scandal uncovered by Tolontan and his team led to the resignation of one health minister and the appointment of another, an earnest-looking fellow named Vlad Voiculescu, who’s at first viewed by Tolontan—and probably by everybody else—with skepticism. Who’s to say he’s any less corrupt than his predecessor?

It turns out that Voiculescu, formerly an advocate for patients’ rights, is aghast at almost everything he learns about how the country’s hospitals operate. Soft-spoken, with a sense of the absurd, he laughs bitterly when he sees those in power patently lying on television. Nanau brings him into focus as a person, to the point that his mission matters to us, too. He brings the same intuitive scrutiny to Tolontan and his staff, as they chase down new angles of their corruption story with a zeal that ends up endangering them. This is a story about pushing for what you know is right, refusing to be thwarted by a sense of futility.

Tedy Ursuleanu, an activist and spokesperson for victims, in 'Collective'
Photo courtesy of Magnolia Pictures

But Collective’s secret ingredient may be, simply, the poetry of a face. Tedy Ursuleanu is a young woman who became an activist and a spokesperson for victims after suffering extensive burns in the Colectiv fire. In one scene, Nanau shows her posing for a series of art photographs, her damaged, mottled skin partly dusted with velvety white powder, her dark, searching eyes made up like those of an inquisitive feline. Later in the film, we see the finished works from the photo shoot, astonishing in their frank beauty. In another sequence, we see Tedy learning how to work the mechanical hand for which she’s been fitted. She has lost most of her fingers, though she still wears a large silver ring on what’s left of one, an act of glamorous defiance.

Documentaries, by their nature, are matter-of-fact creatures; often they keep us so busy absorbing information that we’re almost too distracted to be moved. But Collective is different. Teasing out its bullet points—the importance of activism and good citizenship, and of preserving a strong, free press—is easy. But in the end, it’s almost always a face that moves you the most. A grieving father, an official who can’t hide his contempt for his corrupt colleagues, a journalist whose demeanor is essentially one big question mark, an elegant young woman whose life was changed drastically by a spark: Collective is a story told in faces. No matter how far away from Romania you live, these people are your neighbors. 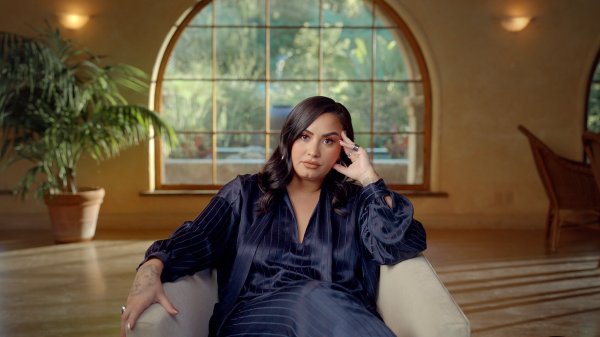 In Demi Lovato: Dancing with the Devil, the Pop Star Lays Her Secrets Bare, in a Guarded Way
Next Up: Editor's Pick