COVID-19 Cases Are Rising in Europe, and the Vaccine Rollout Is Lagging. How Did It All Go So Badly Wrong?

Nurses push a COVID-19 patient in his bed in an intensive care unit at a hospital in Stod, Czech Republic, on Feb. 25, 2021
Michal Cizek/AFP—Getty Images
By Madeline Roache

Europe was one of the first regions to be hit hard by COVID-19 last spring. In mid-May 2020, the World Health Organization declared it the “epicenter” of the pandemic, with more reported cases and deaths than the rest of the world combined. From there, in many ways, the European experience of COVID-19 mirrored the U.S. and its neighbor the U.K., two of the other worst-hit parts of the globe: In the summer, many bars, restaurants and clubs reopened their doors, and international visitors were welcomed back. Then cases began to surge again in the autumn and winter, in large part thanks to the holidays, and lockdowns returned.

But now, the European experience of the pandemic is diverging from the U.K. and U.S., which have rolled out effective vaccination programs and are seeing case rates fall, while countries throughout Europe, including the Czech Republic, Hungary, Estonia, Slovakia, Italy, France, Poland and Sweden have seen significant rises in average new daily cases in the recent weeks. Overall, the European Union has recorded over 800,000 new coronavirus cases over the past seven days, an increase of about 5.8% from the seven days prior.

The vaccine rollouts in the U.K. and the U.S. are expected to help these countries reopen and start rebuilding their economies this year. But the E.U.’s slow and chaotic deployment of vaccines threatens to keep countries across the bloc in lockdown and businesses closed for months to come.

The majority of struggling countries are in central and eastern Europe. The worst situation at the moment can be found in the Czech Republic, a central European country of 10.7 million, where cases have risen sharply in the past few weeks; it currently has the highest infection rates in Europe (other than tiny San Marino), with about 110 new cases each day per 100,000 people last week, compared to about 27 per 100,000 for the E.U overall, according to data from Johns Hopkins University (JHU).

The Czech Republic isn’t the only E.U. member struggling—Estonia in particular is also in the midst of a surge, reporting about 100 daily cases per 100,000 population last week compared to 40 in early February. To a lesser extent, Hungary, Slovakia, Serbia, and Sweden have also seen spikes in early March.

But the Czech Republic is, by a meaningful margin, suffering the most—especially if you consider the fact that Estonia, its closest E.U. comparison in terms of per capita case rates, has a GDP one-fifth its size. The country’s case rates have put a massive strain on its public health system; on March 5, the Czech government announced publicly that it had asked Germany, Switzerland and Poland to take in dozens of COVID-19 patients, in order to ease the burden on Czech hospitals that were running out of bed space.

What happened to put parts of Europe so far behind?

The “most likely explanation” for the rise in cases is the spread of a new variant, first identified in South East England in December, says Martin McKee, professor of European public health at the London School of Hygiene and Tropical Medicine. The new variant, technically referred to as “B.1.1.7.,” is believed to be about 50% more transmissible than the earlier forms of SARS-CoV-2, he says.

In the Czech Republic, lack of mass sequencing of the virus in December and January has meant scientists were unable to identify if and where the B.1.1.7 variant had spread in the country, says Rastislav Madar, Head of the Institute of Epidemiology and Public Health at the University of Ostrava and a former advisor to the government. It remains unclear how widespread the variant is. A Feb. 12 Reuters report cites “data from January“ showing “between 45% and 60% of new patients were infected with the U.K. variant,” and according to Madar, in February, the variant accounted for 60% to 80% of cases in some parts of the country, says Madar. “It was so dominant that it was really unstoppable,” he adds.

Read more: The Key to Building Resilience in a Crisis

Lockdown measures imposed to keep previous iterations of SARS-CoV-2 under control have generally “not been effective enough” at containing the B.1.1.7 variant, says McKee. “Many countries are struggling with two parallel epidemics of the old and new variants.” He argues that E.U. countries should have reviewed their COVID-19 strategies in early December when the variant was first found to be spreading in the U.K. “Countries almost needed to put their restrictions up a tier at that point to control the new variant,” says McKee. But many did not.

Since then, the Czech government has made efforts to get the country’s outbreak under control. For example, on Feb. 14, it extended a state of emergency to keep bars, restaurants and most stores closed. Additional measures were introduced on March 1, including forced closures of kindergartens and schools for younger children and a ban on travel between districts. On March 3, the government made weekly COVID-19 tests mandatory for companies and factories that were allowed to stay open. These measures will be in place until at least March 28. But Madar says that the country is better off keeping those mandates in place well beyond that timeline. “If we lift lockdown only to reimpose it later, people will lose total confidence in the authorities and stop caring about the rules,” he says.

The vaccination rollout and the future of the European economy

Huge financial concerns loom for the E.U., whose economy contracted by 6.4% last year, according to Eurostat, the E.U’s statistical office. The future very much depends on the speed and effectiveness of the vaccination rollout, says Carsten Brzeski, an economist at global financial-services company ING. Based on the trajectory right now, Brzeski estimates that Europe’s economy won’t regain pre-crisis levels until late 2022 or early 2023. “Europe is probably one year behind the U.S.,” he says.

The E.U., meanwhile, has administered a first dose to only 7% of the population, and has fully vaccinated 3.09% as of March 10, according to Politico. The slowness of the rollout in the E.U. has been attributed to a number of reasons: late approval of the vaccines, bureaucratic procurement processes and delays in production—but the bottom line is it has lagged in comparison to other wealthy regions like the U.S. and U.K. The European Commission has pledged that everyone in the E.U. will be offered a vaccine by the end of September. But it would have to significantly accelerate its rollout to reach this goal. Politico estimates that unless the bloc picks up the pace, about 38% of its E.U. residents will be vaccinated by Sept. 22.

Within the E.U., the economic-recovery picture varies by country. Some, like Germany and the Netherlands, are expected to reach pre-crisis levels at the end of 2021 or early next year, while others, like Spain, Italy and Greece whose tourism-dependent economies have suffered from a fall in travel, will probably reach this level at the end of 2023, says Carsten.

Italy is in a particularly difficult position. “It was subject to one of the largest economic contractions last year, having not only experienced one of the worst coronavirus caseloads, but also having lost out from the summer tourist season,” says Sam Miley, an economist at the London-based Centre for Economics and Business Research. A second consecutive summer with limited visitors to Europe’s travel destinations, like France, Spain and Italy, “would cause considerable economic damage,” to these countries, he adds.

Countries throughout the E.U. have severely restricted travel to and within the bloc since January. The E.U. as a whole has discouraged non-essential international travel from red (high risk) and dark red (very high risk) zones in E.U. and said member states should require travelers from these zones to show proof of a negative COVID-19 test taken within 72 hours of departure. The bloc has also advised its members to restrict all travel from non-E.U. countries except for seven countries (including Australia, New Zealand and South Korea) as of Jan. 28. France banned all non-essential travel from outside the E.U. and discouraged travel to and from other parts of the European continent. Countries including Spain, Finland and Turkey have banned flights from the U.K. because of the new variant that has become widespread there.

Keen to bring back visitors, travel destinations like Spain and Italy have supported introducing digital health passes that would allow E.U. citizens who have received a COVID-19 vaccine to travel for work or tourism. But the system, which would not be introduced for at least two months, is not without risks. Experts warn that because it’s unclear how effective vaccines are at preventing actual infection and transmission with the virus—the shots have been approved on the basis of their ability to prevent disease, not infection—a disparity in vaccination rates between member states could lead to new outbreaks. Immunized tourists could unknowingly spread the virus to local communities that have not been protected by a vaccine.

Read more: Europe Is Considering COVID-19 Vaccine Passports. Should the Rest of the World Catch Up?

The E.U. is also discussing creating a new designation to ease movement around the bloc: travelers from “green zones,” areas identified as having low infection rates, would not be subject to restrictions, such as quarantine or testing on arrival. The strategy has already been successfully used by countries including Australia and China. But at the moment in Europe, “it’s difficult to see where these zones will be apart from Norway and Finland. Rates are pretty high everywhere,” says McKee. “The ideas are there, but they’re maybe premature.”

Digital health passes and green zones can help travel to resume this summer, but the vacation period will not be normal and free from COVID-19 rules, experts say. “It will be hampered by restrictions, vaccinations, tests, but also by fear,” says Carsten. For the return of the “real new normal,” he says, Europe will have to wait until the spring and summer vacations in 2022. 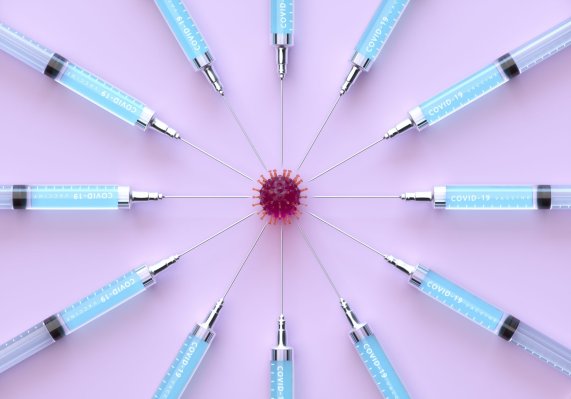 Breaking Down What COVID-19 Vaccine Effectiveness Means
Next Up: Editor's Pick