Europe Is Considering COVID-19 Vaccine Passports. Should the Rest of the World Catch Up?

A picture taken on March 3, 2021 in Paris shows a vaccine vial reading "Covid-19 vaccine" and a syringe on an European passport.
Joel Saget—AFP via Getty Images
By Aryn Baker

In a move welcomed by many of Europe’s traumatized travel destinations, the European Union’s leadership is considering a digital health pass that would allow E.U. citizens who have received a COVID-19 vaccine to travel for work or tourism.

Ursula von der Leyen, president of the European Commission, tweeted that the goal of such a “Digital Green Pass” is to provide “proof that a person has been vaccinated; results of tests for those who couldn’t get a vaccine yet; [and] info on COVID-19 recovery” enabling residents to move safely within the E.U. and abroad.

Israel, which has successfully vaccinated 39% of its population, has already implemented a similar program, called a “green pass” that allows the vaccinated access to gyms, concerts and restaurants, while Denmark has already announced its own plans to introduce a digital health passport.

There are also several private-sector and non-government digital health passports already being rolled out, including the IATA Travel Pass, which was developed by the International Air Transport Association for travellers. Another getting significant traction is CommonPass, developed by The Commons Project Foundation, a non-profit that builds digital data platforms for public good, which will be used by Jet Blue, Lufthansa and United in coming weeks. The organization is also in talks with hotels, concert venues and sports leagues in the United States.

The idea is not without controversy, particularly among human rights activists, data protection advocates and countries with limited access to vaccines. Nonetheless, vaccine passports, if implemented well, offer one of the fastest routes to controlling the coronavirus while shoring up economies devasted by COVID-induced restrictions. Should the rest of the world catch up?

Where would vaccine passports be used?

The tourism industry is the most eager to put them into practice. Airlines such as Qantas are already demanding proof of vaccination or recovery for international flights; so too are certain cruise lines. Spain and Greece, whose tourism-dependent economies desperately need a robust summer travel season, are considering opening up travel corridors with the U.K. and Israel, respectively, to citizens who can prove their vaccination status.

There are applications beyond travel as well: Universities could open up with confidence knowing that their students are vaccinated, employers could start hiring again, movie theaters and concert venues could once again open their doors.

How would vaccine passports work?

Typically, they will entail an app that users can show officials to prove their status. The CommonPass app notifies users of entry rules, such as a vaccine or a negative COVID-19 test, then helps verify that they have met the requirements, either by connecting with the relevant clinic, health authority or pharmacy that provided the service, or by having the consumer download test results or vaccination information to their phone. The data itself is not stored on the user’s phone; instead the app generates a QR code that can be scanned just like a digital boarding pass, confirming that the customer has met the requirements. Customers without smart phones can print out the confirmation codes instead.

Unlike country- or industry-specific digital health apps, CommonPass does not set the rules. It allows gatekeepers to set their own parameters, whether they are specific test providers, authorized vaccination clinics or recovery criteria, and provides the platform to ensure they are met. “Ultimately, what we’re really building is a common trust network,” says CEO Paul Meyer — an internationally recognized registry of verified health organizations, so that a country or venue can be confident that their specific needs are met.

I have a paper that says I am vaccinated. Shouldn’t that be enough proof?

It’s true that countries in Africa and Asia have long demanded proof of vaccination against yellow fever and other diseases from visitors. But the “yellow card’ used for verification is easy to forge and hard to replace (getting an additional vaccine is often easier than getting a new card, even if it’s not medically advised).

Having these kinds of vaccine “cards” for COVID-19 would be even more complicated. With great demand and limited supplies of vaccines, the potential for fraud is high. So too is the possibility of confusion: there are multiple vaccines currently in use globally, with more in the pipeline. And people who have already had the virus may, in the future, need different vaccine requirements.

Juggling those multiple criteria would present a major challenge for immigration officials, airline check-in counters and other doorkeepers. Governments may want travel and commerce to resume as quickly as possible, says Meyer. But their first obligation is to the health and safety of their populations. “If everyone’s wandering around with pieces of paper in random languages about some test they allegedly got on the other side of the planet, it’s hard to make the decision to open up,” he says. “What a universally recognized health pass achieves is confidence that the person who wants to come into my country is the same person who actually got that vaccine. I know what kind of vaccine it was, and how long ago. I know what kind of test was given, and that was it from a reputable lab instead of some fly by night clinic that happened to have a printer.”

How long will it take before vaccine passports are widespread?

A couple of months at least. European nations like Spain and Greece are hoping to have systems set up in time for the summer travel season, but it will take time to get all the regulations in place.

The bigger problem in the E.U. is access to vaccines. The United States says it will have enough vaccines for its entire population by end of May, and the United Kingdom anticipates that all over-50s will be vaccinated by that time. But, due to the slow rollout of vaccines on the continent, it won’t be until September that E.U. citizens will be in a similar position, long after the peak holiday season. This summer could resemble something out of an E. M. Forster novel, with vaccine-rich Americans and Brits taking over southern Europe’s holiday hotspots, while locals are forced to stay at home.

That disparity could actually lead to an increase in cases, says Francisco Femenia-Serra, a tourism specialist at Nebrija University’s Social Sciences School in Madrid. While vaccines stave off severe COVID-19 cases in vaccinated individuals, it is not yet clear if they can prevent transmission. “We will have tourists who are protected by the vaccine, and that is important, but what about local communities? If our tourism and hospitality industry workers are not protected it could be another disaster.”

Isn’t it unfair to require vaccine passports when not everyone can get one, or wants to get one?

That’s the argument of countries like France and Germany, and organizations such as the World Health Organization, who say that health passes tied to vaccinations will increase inequality until everyone has an opportunity to get vaccinated. The U.K’s Equality and Human Rights Commission says vaccine requirements for travel or access to venues could lead to “unlawful discrimination.” Belgium’s foreign minister, Sophie Wilmès, tweeted that while the idea of a standardized European vaccine verification system was a good one, there should be “no question of linking vaccination to the freedom of movement around Europe. Respect for the principle of non-discrimination is more fundamental than ever since vaccination is not compulsory and access to the vaccine is not yet generalised.”

The proposed health passes will likely increase inequality, says Anthony Dworkin, Senior Policy Fellow at the European Council on Foreign Relations, but they will still be vital for economies reeling from lockdowns and travel restrictions: “Some element of unfairness is the price we will have to pay for a kind of partial reopening.”

Ok, I’m fully vaccinated, I downloaded the app, and I’ve booked my tickets. Can I throw away my mask?

Nope. Even with health passports in hand, social distancing measures will still have to stay in place for a long while yet. Not everyone can or will get the vaccine, and the risk of new variants looms large. Until vaccines are universally available, that means even holiday hotspots will have to ensure that venues are well-ventilated, patrons wear masks, and everyone keeps washing their hands.

“A vaccine passport alone won’t bring us back to normal,” says Femenia-Serra. “It’s just one small step towards healing the economic devastation [in the tourism sector]. A passport or a negative test shouldn’t be an excuse to do whatever I want. Once I get to wherever I am going, I still need to behave in the right way. Because if we don’t, there is another disaster waiting for us after the summer is over.” 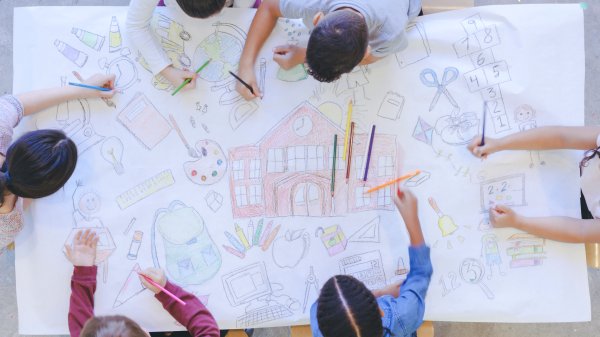 My Kids Are in Daycare. How Should That Affect My Family's Social Distancing Strategy?
Next Up: Editor's Pick