Layleen Xtravaganza Cubilette-Polanco, a 27-year-old transgender woman who died in June 2019 while incarcerated at Rikers Island, was not housed in an area of the jail that was appropriately suited to her mental and physical health needs, according to a new report from New York City’s jail oversight board.

According to the review, the Department of Corrections (DOC) was determined to not house a transgender woman in general population housing areas where cisgender women are held — though Rikers officials did, however, discuss placing Polanco in a men’s ward. This unwillingness led to Polanco being placed instead in a Restrictive Housing Unit, a form of solitary confinement, after her return from a hospital where she had been receiving psychiatric care.

In recent weeks, Polanco’s death has recaptured national attention and sparked a new wave of outrage, following outcry last year over her detention in solitary confinement, after video footage emerged showing that Rikers’ staff allegedly neglected to provide her with life-saving care.

Polanco, who was arrested for allegedly assaulting a cab driver and for possession of a controlled substance and was being held on a $500 bail, died on June 7, 2019 following an epileptic seizure, according to a medical examiner.

In June 2020, Bronx District Attorney Darcel Clark announced that no criminal charges would be sought following an investigation into Polanco’s death. Clark’s statement was harshly criticized by Polanco’s family for publishing her birth name, a practice known as deadnaming.

Now, a new report from the New York City Board of Corrections (BOC) reviewing the circumstances of Polanco’s death shows that jail staff did not properly take her history of mental health issues into account before putting her in solitary confinement. The Correctional Health Service’s (CHS) process for identifying those who should be exempt from solitary confinement due to their medical and mental health history is “insufficient, inconsistent, and potentially susceptible to undue pressure” from the DOC, per the report, which noted the problem is among systemic issues impacting the entire NYC DOC system.

Polanco’s family has filed a wrongful death lawsuit against New York City and a number of Rikers employees. With the release surveillance video showing jail guards trying to revive Polanco for about an hour and a half before they sought medical help, her family spoke out to say the footage was evidence that the jail’s staff had neglected to give her necessary care.

While Polanco had initially been held in a Transgender Housing Unit dormitory, she was charged with violating the DOC’s rules after a physical altercation with another individual in the dorm and, following a May 14 disciplinary hearing, sentenced to 20 days in solitary confinement.

The following day, Polanco began exhibiting signs of mental distress, according to the report. In its review, the BOC cited a Rikers officer who wrote Polanco a referral to mental health services, noting on May 15 that she was “expressing a desire to commit suicide and/or attempting suicide,” frequently “shouting, crying and/or screaming,” “having hallucinations/delusions” and “being alarmed (frightened) or in a state of panic,” among several other signs symptoms indicative of psychological distress.

While in this distressed state, Polanco is said to have charged at an officer with her fist out, hitting their arm. Polanco was then taken to Elmhurst Hospital, where she stayed for nine days — eight of which she spent in a psychiatric prison ward.

Complications arose over where jail staff should place Polanco upon her return from the hospital to Rikers Island, according to the report. While Polanco’s history of seizure disorder at first prevented her from being approved for “a cell housing placement,” on May 24, a CHS medical doctor “cleared” her for solitary confinement, noting that “her condition has been stable.”

The BOC’s findings also note that DOC staff in the solitary confinement unit left Polanco alone for stretches of 57 minutes, 47 minutes and 41 minutes on the day she died. DOC policy stipulates that inmates placed in solitary confinement should be observed every 15 minutes.

In its report, the BOC laid out several recommendations for DOC staff to prevent future inmate deaths while in custody, including calling on the department to make a plan for rehousing people due to interpersonal conflicts and specifically asking that transgender women be included in general population units with cisgender women. The BOC also recommends that key medical information be relayed between departments in a timely manner; this practice having not been implemented consistently in Polanco’s case.

“Our deepest condolences are with Layleen Polanco’s family and friends and we thank the Board of Correction for their time and diligence in preparing this report,” a statement from DOC commissioner Cynthia Brann provided to TIME reads. “We have worked tirelessly to create a correctional system that is safer, more humane, and fairer, fundamentally reforming our housing structure to ensure that all people, regardless of their gender identification, have the access to the resources they need. We are committed to working with our partners at Correctional Health Services (CHS) to keep all individuals in custody safe and we are carefully reviewing all of the Board’s recommendations.”

Polanco’s case has received renewed attention amid nationwide protests against police brutality and calls for reform to the policing and criminal justice systems, following the police killings of George Floyd, Breonna Taylor and Tony McDade, a Black transgender man, this year.

Uprisings against police brutality have zeroed in on the communities most often affected by the violence, including Black transgender women and men. On June 14, 2020 thousands gathered in Brooklyn, N.Y. to rally for Black transgender lives — one day before the U.S. Supreme Court, in a landmark ruling, said workers cannot be fired for being transgender or gay. 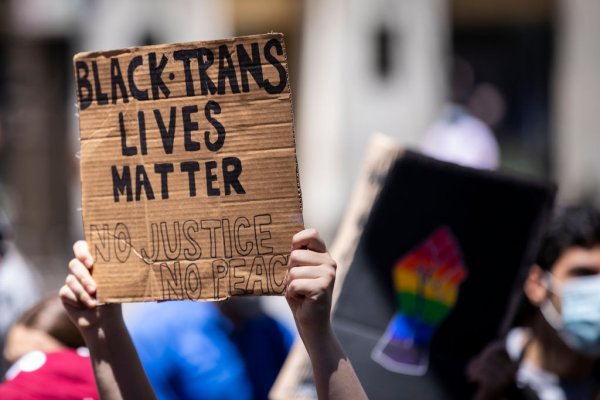 Two Black Trans Women Killed in the Past Week
Next Up: Editor's Pick