It's Not Clear That We Actually Need Human Challenge Trials for COVID-19, But the U.K. Is Moving Ahead With Them Anyway

On Feb. 17, health officials in the UK announced that they are ready to start exposing healthy volunteers to the COVID-19 virus in a carefully controlled study. The so-called human challenge trial is the first of its kind for COVID-19 and will help scientists learn how much virus is needed to cause infection, among other important questions.

The practice of intentionally exposing healthy people to a disease-causing (and potentially deadly) pathogen isn’t new in science, but it remains controversial. Scientists must balance the benefits of exposing people—which mostly fall in the realm of new knowledge about the microbe in question and the disease it causes—against the risks of infection and disease. Human challenge trials are especially useful when time is of the essence, and researchers want to quickly test a new drug or vaccine, for example, and can’t wait for a threshold of people to get naturally infected. In those cases, the intentional exposure speeds up the time to getting critical answers about whether a potential new treatment or vaccine works.

That was the justification for considering human challenge trials a few months ago to study COVID-19 vaccines. But as COVID-19 case counts continued to rise over the holidays around the world, most vaccine makers quickly reached the number of cases they needed to analyze the effectiveness of their shots. Plus, there are now several vaccines authorized as safe and effective, so the immediate mandate for quickly developing a vaccine has waned. “We are no longer in the mode of, let’s accelerate the approval process for vaccines,” says Dr. Ezekiel Emanuel, chair of medical ethics and health policy at the University of Pennsylvania. “So the exact justification for [human challenge trials] I think is harder to come by.”

U.K. health officials say the challenge trials will seek to answer a different question now: how much virus does it take to cause an infection? That information could shed light on how quickly the virus spreads from person to person—essential in understanding how contagious the virus is, and potentially where more efforts should be focused on trying to contain the virus even when it’s circulating in low levels in a community in order to protect more people from serious illness.

Eventually, the challenge studies will also test vaccines. “We have secured a number of safe and effective vaccines for the U.K., but it is essential that we continue to develop new vaccines and treatments for COVID-19,” said Clive Dix, interim chair of the U.K’s vaccine task force, in the statement announcing the trial. “We expect these studies to offer unique insights into how the virus works and help us understand which promising vaccines offer the best chance of preventing the infection.”

Weighing the risks and benefits, however isn’t straightforward since while the younger people being recruited don’t generally experience severe COVID-19 disease, some could still get pretty sick and experience long-term effects from their illness. “The correct answer probably is not that [human challenge studies] should never be done,” says Dr. Tom Frieden, president of Resolve to Save Lives, a global public health initiative, and former director of the U.S. Centers for Disease Control and Prevention. “But the bar is pretty high to make sure the benefits likely to come out of the study outweigh the risks that individuals are taking.”

Knowing the minimum amount of virus needed to trigger an infection “would be interesting,” says Dr. Kirsten Lyke, professor of medicine at University of Maryland who is overseeing a number of COVID-19 vaccine trials. “But is it so interesting that we need to know that? Does that outweigh the risk to the volunteers? I do human challenge models a lot. And they carry with them an extra set of stressors because you really do not want to harm anyone. And this would make me pretty nervous.”

Lyke has conducted human challenge trials on treatments for malaria, and her colleagues at University of Maryland have used that approach to study influenza vaccines. But those diseases differ from COVID-19, she says, because there are treatments for them. So after getting exposed to the disease in the trial, if volunteers got very sick, they could quickly be treated.

The cholera vaccine recently approved by the U.S. Food and Drug Administration was also studied in a human challenge trial—because it’s difficult to predict where cholera will break out in the world, it was the only way to test the shot expediently. But in that case, too, any study participants who developed serious disease could be treated with antibiotics.

“I’m not quite sure of the urgency in launching a human challenge trial for COVID-19 at this time,” says Lyke. “I would say that most people who actually do human challenge studies come down on the side of being extra cautious toward proceeding on something like this. I certainly wouldn’t want to be responsible for someone becoming quite ill.”

Emanuel agrees. “I would feel better [with the COVID-19 human challenge studies] if we had a bunch of interventions available that we were sure could prevent people from getting serious illness,” he says. While there are vaccines and several drugs that can reduce that risk, “knowing a little bit more about whether we have appropriate safeguards to make sure no one dies [in these studies] is vitally important.”

The U.K. study will start with 90 volunteers between the ages of 18 and 30; they will, of course, be fully informed of the risks involved. According to the announcement from U.K. government officials, the participants will be quarantined at the Royal Free Hospital in London for at least 14 days, and will get exposed to the COVID-19 virus via drops in the nose two days after checking in. Doctors will take nasal and blood samples from them every day to monitor changes in the level of virus and in their immune reactions. After two weeks, the participants will return home, though researchers will continue to monitor them for a year.

That too is controversial, says Frieden. While there is an ethical argument for reimbursing volunteers in a medical study, especially if they will be isolated for two weeks, he says “you really have to think hard about any subtle forms of incentives that might look like coercion, not just to today’s audiences, but to future audiences.”

The participants will be exposed to a version of the COVID-19 virus that was circulating last summer—that is to say, not any of the new variants that have emerged from the U.K., South Africa and Brazil in recent months. That may limit the usefulness of the study, experts say, since a key question now is how well currently authorized vaccines can continue to protect against the mutant strains.

Lyke also notes that both Moderna and Pfizer-BioNTech are already working on developing boosters and new shots specifically designed to address the mutant strains. That, in theory, further reduces the need for human challenge trials, especially given the fact that the planned study will use an older version of the virus that may no longer be dominant—or even relevant—in a few months.

U.K. health officials say the study is a foundation for speeding up future research into new variants and vaccines, so new versions of shots, if they are needed, can reach the public sooner. “Our eventual aim is to establish which vaccines and treatments work best in beating this disease,” said Dr. Chris Chiu, chief investigator for the trial at Imperial College London, in a statement. “But we need volunteers to support us in this work.” 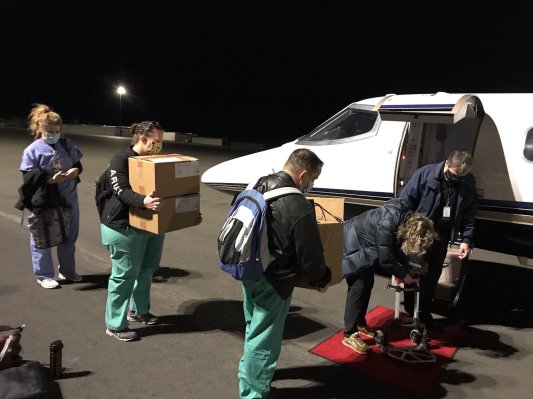 Inside the Effort to Vaccinate Millions of Rural U.S. Veterans
Next Up: Editor's Pick