The COVID-19 Virus Is Mutating. What Does That Mean for Vaccines?

As we enter the second year of living with the new coronavirus SARS-CoV-2, the virus is celebrating its invasion of the world’s population with yet more mutated forms that help it to spread more easily from person to person.

One, first detected in the U.K. in December, has already raised alarms about whether the COVID-19 virus is now escaping from the protection that vaccines just being rolled out now might provide. The variant has also been found in the U.S. Already, U.K. officials have tightened lockdowns in England, Scotland and Wales, and over the holidays, more than 40 countries banned travelers from the region in an effort to keep the new strain from spreading to other parts of the world. Health officials are also concerned about a different strain found in South Africa that could become more resistant to vaccine protection. This variant includes a few mutations in key areas that antibodies, generated by the vaccine, target.

Exactly how the new strains affect people who are infected—such as whether they develop more severe symptoms—and whether they can lead to more hospitalizations and deaths, aren’t clear yet. But scientists are ramping up efforts to genetically sequence more samples from infected patients to learn how widespread they are. So far, there are enough hints to worry public health experts.

The fact that SARS-CoV-2 is morphing into potentially more dangerous strains isn’t a surprise. Viruses mutate. They must, in order to make up for a critical omission in their makeup. Unlike other pathogens such as bacteria, fungi and parasites, viruses have none of the machinery needed to make more copies of themselves, so they cannot reproduce on their own. They rely fully on hijacking the reproductive tools of the cells they infect in order to generate their progeny.

Being such freeloaders means they can’t be picky about their hosts, and must make do with whatever cellular equipment they can find. That generally leads to a flurry of mistakes when they sneak in to copy their genetic code; as a result, viruses have among the sloppiest genomes among microbes. The bulk of these mistakes are meaningless—false starts and dead ends—that have no impact on humans. But as more mistakes are made, the chances that one will make the virus better at slipping from one person to another, or pumping out more copies of itself, increase dramatically.

Fortunately, coronaviruses in particular generate these genetic mistakes more slowly than their cousins like influenza and HIV—scientists sequencing thousands of samples of SARS-CoV-2 from COVID-19 patients found that the virus makes about two errors a month. Still, that’s led so far to about 12,000 known mutations in SARS-CoV-2, according to GISAID, a public genetic database of the virus. And some, by sheer chance, end up creating a greater public health threat.

Just a few months after SARS-CoV-2 was identified in China last January, for example, a new variant, called D614G, superseded the original strain. This new version became the dominant one that infected much of Europe, North America and South America. Virus experts are still uncertain over how important D614G, named for where the mutation is located on the viral genome, has been when it comes to human disease. But so far, blood samples from people infected with the strain show that the virus can still be neutralized by the immune system. That means that the current vaccines being rolled out around the world can also protect against this strain, since the shots were designed to generate similar immune responses in the body. “If the public is concerned about whether vaccine immunity is able to cover this variant, the answer is going to be yes,” says Ralph Baric, professor or epidemiology, microbiology and immunology at University of North Carolina Chapel Hill, who has studied coronaviruses for several decades.

The so-called N501Y variant (some health officials are also calling it B.1.1.7.), which was recently detected in the U.K. and the U.S., may be a different story. Based on lab and animal studies, researchers believe this strain can spread more easily between people. That’s not a surprise, says Baric, since to this point, most of the world’s population has not been exposed to SARS-CoV-2. That means that for now, the strains that are better at hopping from one person to another will have the advantage in spreading their genetic code. But as more people get vaccinated and protected against the virus, that may change. “Selection conditions for virus evolution right now favor rapid transmission,” he says. “But as more and more of the human population become immune, the selection pressures change. And we don’t know which direction the virus will go.”

In a worst case scenario, those changes could push the virus to become resistant to the immune cells generated by currently available vaccines. The current mutants are the virus’ first attempts to maximize its co-opting of the human population as viral copying machines. But they could also serve as a backbone on which SARS-CoV-2 builds a more sustained and stable takeover. Like a prisoner planning a jailbreak, the virus is biding its time and chipping away at the defenses the human immune system has constructed. For example, the virus may mutate in a way that changes the makeup of its spike proteins—the part of the virus where the immune system’s antibodies attempt to stick to in order to neutralize the virus. And that one mutation may not be enough to protect the virus from those antibodies. But two or three might.

The biggest concern right now, says Baric, is that there are already two or three variants of SARS-CoV-2 that have mutations in just such places, “where additional mutations can make a more significant change in terms of transmissibility or virulence.”

The best way to monitor that evolution is by sequencing the virus in as many people who are infected, as often as possible. Only by tracking how SARS-CoV-2 is changing can scientists hope to stay ahead of the most dangerous and potentially more lethal mutations. In Nov., the U.S. Centers for Disease Control (CDC) launched a sequencing program that will ask each state to send 10 samples every other week from people who have been infected, in order to more consistently track any changes in SARS-CoV-2’s genome. But it’s a voluntary program. “It’s still not a national effort, it’s voluntary, and there is no dedicated funding for it,” says Baric. “Come on, we’re in the 21st century—let’s enter the 21st century.”

Without substantial federal funding dedicated specifically to sequencing SARS-CoV-2 genomes, most of the work in the U.S. is currently being done by scientists at academic centers like the Broad Institute of MIT and Harvard and the University of Washington. Since early last year, the CDC has been working to better characterize SARS-CoV-2 viruses from patient samples in partnership with some of these academic labs, as well as state and local health departments and commercial diagnostic companies, in the SARS-CoV-2 Sequencing for Public Health Emergency Response, Epidemiology and Surveillance (SPHERES) consortium “If we sequence one out of 200 cases then we’re missing a lot of information,” says Baric. “If we’re sequencing about 20% of cases, then we might start to see something and we would be in the ball game to find new variants. We probably could be doing a better job of that here in the U.S.”

Other countries are also working on this effort. The U.K. has long been a leader in genetic sequencing, and likely because of their efforts were able to identify the new variant relatively quickly after it emerged. Globally, scientists have also been posting genetic sequences from SARS-CoV-2 to the public GISAID database.

Dr. Anthony Fauci, director of the National Institute of Allergy and Infectious Diseases, and chief medical advisor to President-elect Joe Biden, says that his teams are sequencing and studying the new variants to better understand what effect they might have on disease, how close they might be to causing more severe illness and, more importantly as more people get vaccinated, whether the new variants can escape the protection of the vaccines we know work today.

The good news is that if the mutant strains do become resistant to the current vaccines, the mRNA technology behind the Pfizer-BioNTech and Moderna should enable the companies to develop new shots without the same lengthy developing and testing that the originals required. “The mRNA platform is eminently flexible to turn around,” says Fauci. If a new vaccine were needed, it would be treated by the Food and Drug Administration as a strain change in the virus target, similar to how flu shots are modified every year. “You could get that out pretty quickly,” says Fauci, after showing in tests with a few dozen people that the new vaccine produced satisfactory amounts of antibodies and protection against the mutant virus.

Tracking every change the virus makes will be critical to buying the time needed to shift vaccine targets before SARS-CoV-2 leaps too far ahead for scientists to catch up. “We are taking [these variants] seriously and will be following them closely to make sure we don’t miss anything,” says Fauci. 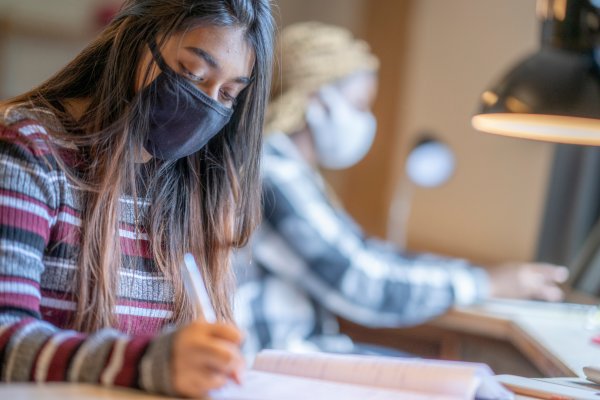 How Can I Get My Roommate to Take the Pandemic Seriously?
Next Up: Editor's Pick