U.K. Plans 'Challenge Trials,' Which Will Intentionally Give People COVID-19 to Test Vaccines

On Oct. 20, researchers at the Imperial College of London announced plans for the first human challenge study of COVID-19, which involves deliberately infecting volunteers with the virus that causes the disease, in order to test the effectiveness of vaccines.

The strategy is controversial, as researchers have to weigh the risks of infection against the benefits of learning how well the various vaccine candidates can fight that infection. The strongest argument in favor of the studies has to do with time. If cases of COVID-19 are waning, then the likelihood that people who are vaccinated would get exposed to and potentially infected with the virus naturally declines as well, and it takes researchers longer to accumulate enough data to tell if a vaccine is effective or not. By intentionally exposing people to the virus after they have been vaccinated, researchers can shrink this timeline significantly.

Scientists have used the model to test vaccines against a number of different diseases, including the very first one against smallpox—Edward Jenner infected his gardener’s son with cowpox, and then exposed the boy to smallpox as a way to test his theory that exposure to the former would protect his son from infection by the latter. Scientists tested an H1N1 influenza vaccine by exposing people to the flu, and did the same with a cholera vaccine and the bacterium that causes it. But the strategy requires a solid base of information about both the disease and the vaccine in order to justify the risks. More recently, for example, scientists considered intentionally infecting volunteers with the Zika virus to test vaccines against that disease, but ultimately decided they didn’t have enough data to justify the risk.

Adair Richards, honorary associate professor at the University of Warwick who last May published guidelines on how to ethically conduct human challenge studies, notes that during a pandemic, the risk of delays in developing treatments should be considered alongside the risks to volunteers who are intentionally exposed to disease. “There is a moral weight to inaction as well as action,” he says. “There is an unseen risk if we don’t do [these studies]. We send a lot of doctors, nurses and care workers to work every day, and some will get really sick and die of COVID-19 in the next few weeks. [Those] few weeks count—that’s the unseen risk.”

More than 38,000 people in the U.S. agree, and have registered their intention to volunteer for challenge studies on 1DaySooner.org, an online recruiting group—despite the fact that no such studies have been planned in the country yet.

The London-based scientists still need to submit a detailed proposal to regulatory agencies on how they could conduct their study. If the proposal is approved, the team won’t start exposing any volunteers until January. Before that, they will first need to determine what dose of SARS-CoV-2, the virus that causes COVID-19, is safe to give to people but can still produce enough disease to test a vaccine. They will start with the smallest possible dose and work up to one that balances safety with the ability to trigger a proper immune response. The participants will remain under quarantine at a designated facility in London until they test negative for the virus, the researchers said.

From a scientific perspective, infecting people with a known dose of the virus can help researchers be more precise about evaluating and comparing people’s immune responses to different vaccines. It will also provide those answers faster than waiting for people to be exposed naturally infected with the disease. “These could almost take the place of phase 3 trials or at least go alongside them,” says Richards.

That speed is one reason why the 1DaySooner.org volunteers have supported human challenge trials. “We could know already if some of the major vaccines in phase 3 trials are actually effective,” says the movement’s founder Josh Morrison, who also co-founded Waitlist Zero, and advocacy group for living organ donors. “It’s not to say that we wouldn’t still need phase 3 studies, but we would obviously be in a much better position if we could say that when we vaccinate healthy young people with this vaccine and then challenge them with virus, it’s 80% effective or 60% effective or 20% effective or not effective at all. It’s useful information we could have now but don’t have.”

Exposing people deliberately to a disease-causing virus, however, would only make sense if the chances of naturally being infected is low, and would delay results of vaccine trials. That’s one issue regulators in the U.K. will likely consider before approving the plan, as daily case numbers there continue to climb. That’s also the case in the U.S., where new infections continue to emerge at high rates in many parts of the country. That’s one of the main reasons that Dr. Anthony Fauci, director of the National Institute of Allergy and Infectious Diseases (NIAID) and member of the White House Coronavirus Task Force, said earlier this year that the studies are not ethically justified—at the time, mid-July, daily case numbers were peaking.

In an Oct. 20 statement to TIME, NIAID officials said the agency is “currently prioritizing randomized controlled clinical trials to evaluate the safety and efficacy of SARS-CoV-2 vaccine candidates. Should there be a need for human challenge studies to fully assess candidate vaccines or therapeutics for SARS-CoV-2, NIAID has begun efforts to manufacture a virus strain that could be used to develop a human challenge model, if needed, although human challenge trials would not replace Phase 3 trials.”

Any human challenge study has to be done with extreme caution, says Richards. His guidelines include giving people a mandatory period of time to think about their decision to ensure they are making the choice freely and without any duress, and that the risks of infection are conveyed in a straightforward and easily understandable way. Any financial payment should be minimal to cover time away from work and any expenses related to being quarantined for the study, but not large enough to bias people’s decisions. “We also want participants to be screened for mental health conditions and cognitive capacity,” he says, to ensure that they are making their decision to join the study autonomously.

The Imperial College of London team has yet to detail how its study volunteers will be managed, and what type of informed consent they will provide, but the announcement could change the discussion about the feasibility and utility of human challenge studies. Having studies that compare people’s immune responses to different vaccines could be useful in prioritizing which vaccines are manufactured in greater quantities. “Even if every vaccine currently in phase 3 trials works very well, we won’t be able to produce enough doses to vaccinate the whole world in 2021,” says Morrison. “It’s important that we are getting better vaccines and learning from the science and challenge studies are going to be quite useful for that.” 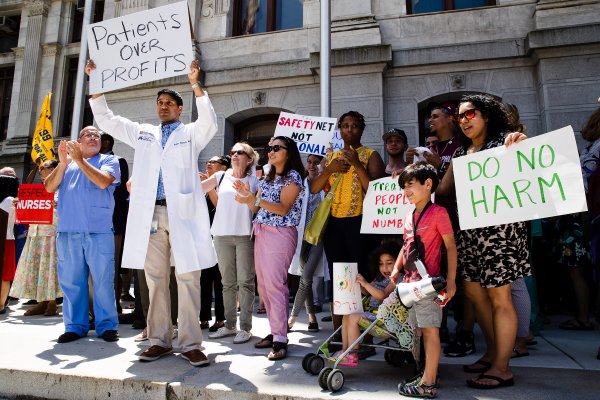 Rural U.S. Hospitals Are On Life Support During COVID-19
Next Up: Editor's Pick