Donald Trump's Impeachment Trial Begins This Week. It Will Offer a Glimpse into the Future of the GOP

Donald Trump’s second impeachment trial is set to begin in the Senate this week, and while it will likely end in the former president’s acquittal, it will also be a revealing inflection point for the Republican Party.

Most Republican Senators have already signaled their willingness to acquit Trump—all but five signaled in a vote last month that they believe trial itself is unconstitutional since Trump has already left office. But the upcoming arguments will determine how Republicans will go on the record in siding with Trump.

As House impeachment managers lay out the horrors of the Jan. 6 riot at the Capitol and tie the violence to Trump’s words and actions, many Republicans who vote for acquittal will likely sidestep the evidence and lean on process arguments about an unconstitutional trial in explaining their decision to constituents. Trump’s own lawyers could make that more difficult if they introduce a broader defense of Trump’s conduct or false claims about election fraud into their arguments. For a party wrestling with its post-Trump future, how fiercely GOP senators defend the 45th President in a trial about one of the most shocking attacks on democracy in recent memory will reveal whether Trump’s legacy continues to maintain a grip on the party.

“This is a debate over the soul of the Republican Party, in addition to being a debate over how to we strengthen our Constitution when those who want to undermine it attack it,” says Timothy Naftali, a professor at New York University and co-author of the book Impeachment: An American History.

One question hanging over the future of the GOP is whether Trump’s legal team, led by David Schoen and Bruce L Castor, Jr., will repeat Trump’s false claims of election fraud as they defend him against the charge of “incitement of insurrection” brought by the House. The lawyers have said they won’t: Castor recently told Reuters it would be “idiotic” to dispute the election results in Trump’s defense. But their written response to the impeachment article, sent on Feb. 2, reiterates Trump’s statement before the Capitol riot that he won the election “by a landslide,” and says that isn’t a false claim.

The mixed messages from Trump’s lawyers ahead of the trial carry complicated implications for Republican Senators, and some worry bringing Trump’s election fraud claims into the trial could undercut the defense and alienate moderates in the party. Some party leaders have already warned against it. Trump’s false claims of a rigged election are “really not material,” GOP Sen. John Cornyn of Texas told reporters on Feb. 1. “I think it would be a disservice to the President’s own defense to get bogged down in things that really aren’t before the Senate.”

In a pre-trial brief filed Monday, Trump’s lawyers focused on technical defenses about what they view as constitutional flaws in both the House impeachment and Senate trial processes, and argued that Trump’s speech before the riot was protected by the First Amendment. They also slammed congressional Democrats, calling this impeachment a “brazen political act.”

For House managers to garner a conviction, all Senate Democrats would need to vote to convict Trump, along with at least 17 Republicans. But at the end of January, when Kentucky Sen. Rand Paul forced a procedural vote on the constitutionality of holding an impeachment trial for a former president, just five Republicans sided with all the Democrats to kill Paul’s point of order. (The Senate will also debate and cast a vote on Feb. 9 over whether the trial is constitutional before arguments begin; it is all but certain to have no impact on the trial’s proceeding.)

If that first procedural vote is any indication of Republican Senators’ openness to consider the evidence at trial, then those five— Susan Collins of Maine, Lisa Murkowski of Alaska, Mitt Romney of Utah, Ben Sasse of Nebraska and Pat Toomey of Pennsylvania— might be in play for Democrats. That still wouldn’t be enough Republican votes needed for a conviction, and only one of them— Romney— voted to convict Trump in the 2020 impeachment trial.

“The more Republicans who vote to convict, the less powerful [Trump’s] argument will be that this was a partisan attack,” says Naftali. “A short trial with a quick acquittal is harmful, because… it feeds into the narrative that is very helpful to Trumpism, which is that Trump is a victim,” he says.

At issue in the trial is Trump’s conduct before the riot at the Capitol that left five people dead. A mob of Trump supporters stormed the U.S. Capitol on Jan. 6, disrupting the Senate’s certification of President Joe Biden’s Electoral College victory. This occurred after months of Trump claiming the election was stolen from him and immediately following a fiery speech by Trump that same morning during which he encouraged his followers to “fight.” The House impeached Trump seven days later on “incitement of insurrection,” charging him with inciting the violence that bloody day.

Jan. 6 was a dark day in U.S. history and a terrifying one for the members of Congress who feared for their safety during the violence. That, experts say, provides a new emotional resonance to the House impeachment managers’ prosecution, compared to the 2020 Senate trial which centered on a telephone call between Trump and the Ukrainian president. “This was as dramatic an event as has happened in a long time,” says Julian Zelizer, a political history professor at Princeton University. “And you’re talking about members of Congress who lived through it, so they felt it in a visceral way. The Ukraine call, they didn’t feel that way.”

Republican Senators listening to hours of oral arguments in the coming days will have to weigh their fealty to Trump and their own political futures if they split with him. “The 2022 primaries are going to be a flashpoint for the Trump wing of the GOP base to vent their anger,” warns Republican donor Dan Eberhart. But they’ll have to balance that against Trump’s alleged culpability in a shocking display of political violence that attacked the very institution they represent. What they decide— and how they explain their choices— will reveal the kind of power Trump still wields.

“The stakes for the Republicans are, what does it mean to be a party that goes on record— formal record— saying this is okay?” says Zelizer. “We’re in this moment where people are wondering, what direction does the party move in? Is there a post-Trump era? And a solid vote, or a nearly solid vote, not to convict I think would signal to many [that] we’re still in the Trump era.” 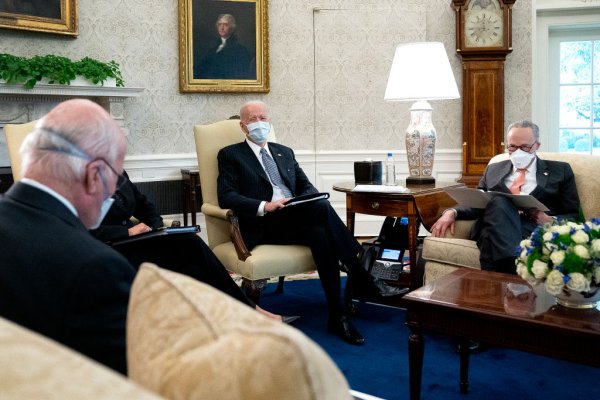 How Joe Biden Has Changed the ‘Toxic Tone’ in the Oval Office
Next Up: Editor's Pick