What We Know About Donald Trump's Impeachment Defense Strategy

Donald Trump’s lawyers in his second impeachment trial plan to argue that the Senate trial is unconstitutional and that Trump’s statements preceding the violence at the Capitol were protected by the First Amendment, a strategy revealed in their first formal response to the article of impeachment against the former president.

“The 45th President of the United States performed admirably in his role as president, at all times doing what he thought was in the best interests of the American people,” his lawyers claimed in the document presented to the Senate on Tuesday.

The filing marked the first glimpse of Trump’s legal strategy after days of turmoil on his defense team. Over the weekend, CNN first reported that Trump had parted with his original group of lawyers, just over a week before the trial is set to begin. He announced two new lead lawyers—Bruce L. Castor, Jr. and David Schoen—on Sunday night.

To defend the 45th president against the House’s single charge of “incitement of insurrection,” his lawyers must grapple with weighty issues of free speech, abuse of power and a leader’s culpability for political violence perpetrated in his name. They plan to focus their defense of Trump on two main arguments, their response reveals: that an impeachment trial for a former president is unconstitutional, and that Trump’s statements that allegedly incited the Jan. 6 Capitol riot were constitutionally protected free speech.

On their complaints regarding the impeachment process, which also include issues with the way the House conducted the impeachment inquiry, Trump’s defense lawyers will be speaking to a large group of sympathetic Republicans in the Senate. All but five Republican Senators have already indicated they think the trial is unconstitutional. That means Trump’s acquittal is all but assured; it is highly unlikely that 17 Republicans — the threshold Democrats need for a conviction — would vote to convict Trump despite thinking the process is legally unsound.

“The Senate of the United States lacks jurisdiction over the 45th President because he holds no public office from which he can be removed,” Trump’s lawyers wrote, “and the Constitution limits the authority of the Senate in cases of impeachment to removal from office as the prerequisite active remedy allowed the Senate under our Constitution.”

The House impeachment managers rebut this argument in their own filing submitted on Tuesday. “It is unthinkable that [the] Framers left us virtually defenseless against a president’s treachery in his final days, allowing him to misuse power, violate his Oath, and incite insurrection against Congress and our electoral institutions simply because he is a lame duck,” they wrote, addressing why, in their view, the Constitution permits impeachment trials of former officials. “There is no ‘January Exception’ to impeachment or any other provision of the Constitution.”

Trump’s lawyers’ defense of his conduct on the facts of the case relies largely on First Amendment protections of free speech and the definition of “incitement.” They argue that Trump was within his rights to express doubts about the outcome of the 2020 election.

“After the November election, the 45th President exercised his First Amendment right under the Constitution to express his belief that the election results were suspect,” the defense response says. “Like all Americans, the 45th President is protected by the First Amendment. Indeed, he believes, and therefore avers, that the United States is unique on Earth in that its governing documents, the Constitution and Bill of Rights, specifically and intentionally protect unpopular speech from government retaliation.”

The defense lawyers also note that Trump disputes the House managers assertion that his statement “We won this election, and we won it by a landslide,” made on Jan. 6, before thousands of supporters in Washington, is false.

Outside legal experts have cautioned that Trump’s lawyers should not focus too much of their defense on the former president’s spurious election fraud allegations. “Focusing on election fraud would be [not] just obsessional but irrational,” says Jonathan Turley, a professor at George Washington University Law School, who recently met with Republican Senators to argue that this impeachment trial is unconstitutional. “Trump currently has a comfortable margin for acquittal,” Turley says. “This could snatch defeat out of the jaws of victory.”

Trump’s lawyers argue that his inflammatory statements before the Capitol riot didn’t encourage or precipitate the violence that followed. “It is denied that President Trump incited the crowd to engage in destructive behavior,” they wrote. “It is denied that the phrase ‘if you don’t fight like hell you’re not going to have a country anymore’ had anything to do with the action at the Capitol as it was clearly about the need to fight for election security in general.”

“President Trump endangered the very constitutional system that protects all other rights, including freedom of expression,” the House impeachment managers wrote. “It would be perverse to suggest that our shared commitment to free speech requires the Senate to ignore the obvious: that President Trump is singularly responsible for the violence and destruction that unfolded in our seat of government on January 6.“

Both Trump’s lawyers and the House impeachment managers will have the opportunity to make their arguments during the Senate trial, which is set to start the week of Feb. 8. 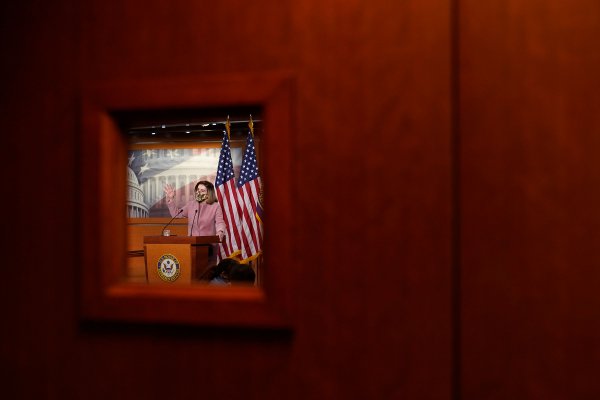 Why Democrats Seem Ready to Go It Alone
Next Up: Editor's Pick