By Tessa Berenson and Lissandra Villa

On Tuesday, Senate Republicans tried to shut down Donald Trump’s second impeachment trial before it ever began. Senator Rand Paul forced a procedural vote on the constitutionality of moving forward with an impeachment trial after a President has left office and become a private citizen.

The move offered an opportunity for Republicans to go on record to show their continued support for Trump, who the House of Representatives impeached for incitement of insurrection on January 13, and to suck the oxygen out of Democrats’ efforts to convict him. “If more than 34 Republicans vote against the constitutionality of the proceeding,” Paul said before the vote, “the whole thing’s dead on arrival.”

Paul’s gambit failed — or at least part of it did. In a vote of 55-45, Democrats, along with five Republican Senators, voted to kill Paul’s point of order, so the trial will move forward as planned. Senators will now deliberate whether Trump is guilty of inciting a mob to attack the U.S. Capitol on January 6. But the trial’s outcome is all but a foregone conclusion, with Tuesday’s vote suggesting it will be almost impossible for Democrats to get the two-thirds vote they need to convict.

It was always going to be a high bar for Democrats to convict Trump, as it was during his first impeachment. But Democrats opted to move ahead with impeachment and a trial to try to hold Trump accountable for what Senate Majority Leader Chuck Schumer called “the gravest offense ever committed by a President of the United States.” In the unlikely event Trump gets convicted, the Senate would open the possibility of barring him from ever holding public office again. But even if he is acquitted, the Senate will air precedent-setting arguments about the limits of a Commander in Chief’s free speech, and Trump will still bear the stigma of being the only president in U.S. history to be impeached twice.

Sen. Joe Manchin, a Democrat from West Virginia, told reporters Wednesday that impeachment is the only proper way to hold Trump accountable for this conduct. “This is much, much more serious than anything we’ve ever seen in our lifetime,” Manchin said, “and it’s really the purpose of having the articles of impeachment in the Constitution.”

On paper, the conduct at the heart of Trump’s second impeachment is more straightforward than his first. His 2019 impeachment in the House — and subsequent trial and acquittal in the Senate early the following year — relied on an extensive cast of characters spanning the globe, a labyrinthian set of relationships and back channels between Ukraine and Trump’s orbit, and a multi-month long investigation in the House.

This time, many of the Democrats acting as jurors believe it will be a faster process, given how much of the evidence likely to be presented is already in the public realm. The article of impeachment charges that Trump “willfully made statements that encouraged—and foreseeably resulted in—imminent lawless action at the Capitol” by riling up a crowd of his supporters with baseless claims of election fraud. “The facts are plain and public and the article is clean and simple, so I think we can move relatively quickly and still provide the President a fair trial,” says Senator Brian Schatz, a Democrat from Hawaii.

The Constitution defines impeachable offenses as “high Crimes and Misdemeanors,” and while there is some debate on this point, it’s widely accepted that an impeachable “high Crime” doesn’t necessarily need to be a legally prosecutable one. In other words, a court deciding whether someone is legally guilty for inciting violence might come to a different conclusion than a Senate deciding whether a President violated the duties of his office.

“It is important, as we move toward an exigent impeachment trial, that we avoid conflating what is impeachable with what is illegal,” Suzanne Nossel, chief executive of PEN America, a nonprofit that advocates for free expression, wrote recently in the New York Times. Nossel argues that even if a court might not convict Trump on the legal definition of incitement, “There is a very strong case that Mr. Trump’s efforts to thwart the Constitution, subvert the election results, encourage insurrection and intimidate officials into obstructing the democratic process meet the impeachment standard.”

Among the evidence that Democrats could present are comments that Trump made during his rally speech on Jan. 6 before the riot at the Capitol. “You’ll never take back our country with weakness,” he told his supporters. “You have to show strength and you have to be strong.” He encouraged them to “fight” and said the United States is “under siege.” He also said, “I know that everyone here will soon be marching over to the Capitol building to peacefully and patriotically make your voices heard.”

Some lawyers sympathetic to Trump’s position argue that First Amendment protections of free speech may apply to Trump’s statements that will come under scrutiny in the trial, and could make a strong defense. “The actual words used by the President, including under the circumstances of having tens of thousands of rally supporters in front of him, do not under the law come close to meeting the standard for what incitement means,” says a former Trump White House official, who requested anonymity due to his current employment.

“The words that have been cited by the President’s opponents are the weakest of weak sauce,” the former official says, paraphrasing Trump’s statements about being “strong” and going to “fight.” “Those are the words used by every single politician that has run for any political race in American history.”

Trump allies argue that his conduct doesn’t meet all three prongs of the Brandenburg test. “I don’t think the President intended for anyone to be harmed,” says Robert Ray, a member of the President’s legal team during the 2020 impeachment trial. “I think you have legitimate questions about the strength of that case.”

Even if Senators agree that Trump’s conduct doesn’t meet the legal standard for incitement, they could still decide to convict him in the impeachment trial. “I’m not going to pre-judge the evidence that the House will present,” Senator Susan Collins, a Republican from Maine, told reporters Tuesday.

Asked if she thought Tuesday’s procedural vote was indicative of what the final trial result would look like, Collins said, “Do the math… I think that it’s extraordinarily unlikely that [President Trump] will be convicted.”

Write to Tessa Berenson at tessa.berenson@time.com and Lissandra Villa at lissandra.villa@time.com. 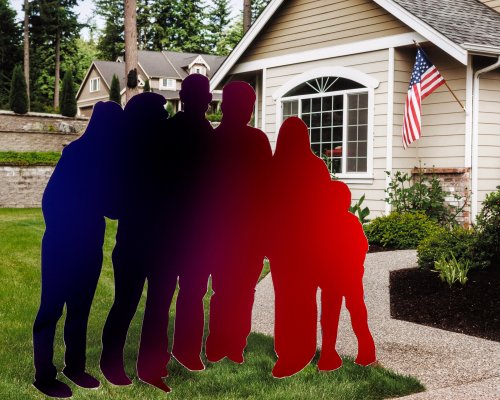 Trump's Presidency Divided Families. What Happens to Them Now?
Next Up: Editor's Pick