Introducing the TIME 2030 Committee Advising on Solutions for the Future

Over the course of the next decade, TIME 2030 will convene thinkers and leaders, introduce and interrogate new ideas, and report on people and organizations helping solve the world’s great challenges.

The project “will be a guide to the post-COVID world, an ongoing exploration of potential solutions and the leaders and innovators driving them,” as TIME’s editor-in-chief Edward Felsenthal wrote to readers.

TIME’s editorial staff will be guided and advised by a committee of leaders from the worlds of business, health, philanthropy, and more. The current members of the committee are:

Birol is executive director of the International Energy Agency. He has been a leading force in global efforts to reach international climate goals, redrawing the pathways to global net zero emissions and making the social and economic impacts of clean energy a central consideration in policy-making.

Pao is a tech investor and CEO of diversity, equity, and inclusion nonprofit Project Include. She wrote the book Reset: My fight for inclusion and lasting change about her lawsuit against Kleiner Perkins Caufield & Byers and her experience running Reddit.

Seibel is a partner at Y Combinator and managing director of its startup accelerator program. A serial entrepreneur, he was co-founder and CEO of streaming service Justin.tv, which later became Twitch Interactive, and also co-founded and served as CEO of Socialcam. Seibel is also a member of Reddit’s board of directors.

Zaki is a managing partner of sustainable investment firm Dismatrix Group. The firm’s Planthesis fund makes investments focusing on the future of food sustainability and security. She previously managed more than $17 billion as an investor in various roles, including as chief investment officer of the Sheikh Zayed bin Sultan Al Nahyan Charitable & Humanitarian Foundation and at the Abu Dhabi Investment Authority. She has also held roles at private equity firm Endeavor Capital and Deutsche Bank. She currently sits on the boards of Mathew Kenney Cuisine, The Vurger Co, Kale United, Beau’s ice-cream and Avanz Global Markets.

Andrés is among America’s best-known cooks. His ThinkFoodGroup of more than 30 restaurants includes locations in Washington, D.C.; Florida; California; New York and five other states; and the Bahamas. But in recent years, Andrés, an immigrant from Spain, has attracted more attention with his humanitarian work. His rapidly expanding charity, World Central Kitchen, launched feeding missions in 13 countries, serving some 15 million meals and corralling more than 45,000 volunteers

Read more: How Chef José Andrés Wants to Feed the World Through the Pandemic

The physician and epidemiologist worked for years on solving some of the great health challenges of our time, playing a key role in the World Health Organization’s eradication of smallpox, and helping cure millions of blindness in India. In 2005, he launched Google’s philanthropic enterprises and has spent time as a member of the World Economic Forum’s Agenda Council on Catastrophic Risk and aiding the CDC’s bio-terrorism response teams.

Swaniker is the founder and CEO of the African Leadership Group, an educational initiative dedicated to creating and developing African leaders. An MBA recipient from Stanford Business School, Swaniker has been recognized as a Young Global Leader by the World Economic Forum.

Walker is the President of the Ford Foundation, the philanthropic foundation set up by Henry and Edsel Ford in 1936. In his position he has focused on how philanthropy can help tackle issues of inequality and racial injustice. In his TIME 100 citation in 2016, Elton John said he was “an inspiration to those of us working for a more just and loving world.”

Siriano got his start as a fashion designer over a decade ago on the reality show Project Runway. In the years since, he has become the go-to designer for some of the most prominent women in the world, thanks to his career-long commitment to designing clothes that flatter all women, regardless of size or background. He has been outspoken on the need for diversity and sustainability in his industry.

As well as being an Oscar-winning actor and director, Jolie is Special Envoy of the U.N. High Commissioner for Refugees (UNHCR) and a TIME contributing editor.

Good has been chief executive of Duke Energy, one of the nation’s largest power generators, since 2013. Under her leadership the company has committed to becoming a net zero producer of carbon by 2050 and has been working to pivot from coal to renewables and nuclear energy.

In 2020, Rao was chosen to be TIME’s first ever Kid of the Year for her astonishing work using technology to tackle issues ranging from contaminated drinking water to opioid addiction and cyberbullying. In her mission to create a global community of young innovators to solve problems the world over, the 15-year-old has created partnerships with organizations like Shanghai International Youth Science and Technology group and the Royal Academy of Engineering in London.

Vanessa Nakate is an activist from Uganda focused on the intersection between social and climate justice. She is founder of environmental groups Youth for Future Africa and the Rise Up movement, as well as Uganda’s Green Schools Project. She was named one of the UN’s Young Leaders for the Sustainable Development Goals in 2020, and was on the TIME 100 Next list in 2021.

Paul Polman spent much of his career at Procter & Gamble, before joining Nestlé as chief financial officer in 2006 and subsequently being appointed chief executive of Unilever in 2009. In his ten years at the company, he strove to put environmental performance on a par with financial results and make Unilever “an effective force for good.” He was invited to join a panel developing the UN’s Sustainable Development Goals and since 2019 has chaired IMAGINE, a social venture intended to galvanize corporate support for the SDGs.

Ma Jun founded the Institute of Public & Environmental Affairs, China’s leading environmental NGO, in 2006. He has spent almost two decades promoting greater transparency around pollution in China. Under his leadership, IPE has developed a range of databases and indices to make available sources of information and to develop benchmarks for corporate environmental performance.

Lisa P. Jackson is Apple’s VP of environment, policy and social initiatives. She leads the company’s efforts to reduce its carbon footprint and address climate change, as well as its racial equity and justice initiative and education policy programs. From 2009 to 2013, she served as administrator of the U.S. Environmental Protection Agency under President Barack Obama. 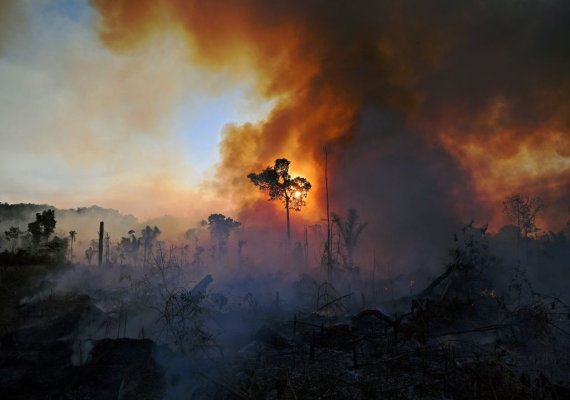 The Public Trusts Businesses Over Government to Solve Our Problems. But We Need Both to Try
Next Up: Editor's Pick