What the QAnon of the 6th Century Teaches Us About Conspiracies

The stories peddled by QAnon supporters today strike an all too familiar chord. Not only are many of their narratives routed in late medieval “blood libel,” but the way they manage to straddle the dichotomy between presumable fact and blatant fiction remind us of important lessons from the medieval past, a period I study as a historian of the Byzantine Empire (330-1453 CE).

A strange text comes down to us from the late-sixth century, known today as the Secret History. It is said to have been composed by a certain Prokopios of Caesarea as a tell-all memoir on the imperial family. Prokopios was the court historian of the Byzantine Empire’s most well-known rulers, Emperor Justinian and Empress Theodora. In his other two books, On Wars and On Buildings, Prokopios recounts the magnificent achievements of this imperial couple. The manner in which Justinian conquered much of the Mediterranean and the impressive buildings that he and his wife built and restored across the Empire.

In the Secret History, however, the author tells us another story of the imperial couple, one that is far more scandalous and far less virtuous. With a paranoid urgency, Prokopios writes in the prologue that he wants to come clean and tell us what actually happened.

Veiled in secrecy, Prokopios says that while certain powerful people were still alive it would have been impossible for him to share this information with us and not be brutally tortured and murdered.

In taking on this narrative task, Prokopios reflects that what he has to share is so outrageous that he fears he “shall earn the reputation of being a narrator of myths and shall be ranked among the tragic poets.” But, nevertheless, it is his moral duty to recount these things in “good faith” and “in dealing with the facts,” causing him to risk it all for the truth. From there he goes on to speak of all the corrupt things done by Justinian and Theodora, as well as the many figures of their court.

Much like the mysterious informant today, simply known as “Q,” Prokopios speaks to his intimate and first-hand knowledge of the secret dealings of empire.

Prokopios’s dossier reads a lot like a cross between QAnon and one of those popular exposés on the Trump White House, like John Bolton’s The Room Where It Happened. Seamlessly, Prokopios weaves attestable (albeit less-than-flattering) facts of Justinian’s rule with outrageous claims about demonic possession and supernatural depravity.

Prokopios describes the rule as that of “the demon that had become incarnate in Justinian.” If anyone were to believe that this was meant just metaphorically, Prokopios even goes on to write that those who spent time with the emperor late into the night would see a ghost instead of his bodily form. And, others said that they would see his body rise from the throne, start pacing the room, all while his head disappeared.

Much as is found across far-right message boards, like 8kun, the Secret History also features a deeply misogynistic treatment of women. Particularly, Prokopios attacks Empress Theodora for her sexual promiscuity. In a medieval equivalent to slut-shaming and revenge porn, Prokopios details in graphic length the various sexual acts that Theodora engaged in, writing at one point, that she lamented that the holes in her nipples were not larger so she could also have sex with them. From there, he even goes on to say that although Theodora often conceived from her sexual escapades, she deployed all known techniques to immediately induce an abortion.

So outrageous are the claims in the Secret History that many historians have disregarded the text as pure political satire, intended for the pleasure and humor of an educated elite circle.

Historians have often downplayed the political and cultural role of the Secret History in Byzantine society. It is stressed that the Secret History received little circulation for most of the medieval period, and certainly little to none in the age of Justinian and that of his immediate successors. The assumption is that it was rarely read by Byzantine subjects.

Yet, the tenth-century Byzantine lexicon, known as The Souda (something between a dictionary and an encyclopedia), repeatedly cites its stories and suggests an important readership for this odd text beyond that which historians have been able to accurately ascertain. The lingering question has always been, put in modern terms: is it an intelligence dossier or a conspiracy theory?

As a historian, looking at QAnon today, I am struck by its deeply familiar hatred and its echoes in Prokopios’s sixth-century text. For once, QAnon has allowed me to understand how the Secret History could have had a palpable hold and convincing power over Byzantine subjects – beyond mere satire but grounded in actionable political efficacy.

The Secret History is a cautionary tale about how certain strategies of hatred persist over time, manifesting themselves in various forms with the same tropes and characters. Perhaps, it is not surprising that Byzantium often rears its head in QAnon threads, citing it either as the origins of the “deep state” or heralding its preservation of a white-ethnostate in the face of Rome’s fall.

Moreover, it reminds us of the very real efficacy that such sensational and seemingly outrageous texts can have. It is often easy to laugh off the ludicrous stories promoted by QAnon, from Pizzagate to performance artist Marina Abramović being a child-eating Satanist. However, these narratives of hatred recur precisely because they are efficacious at seducing and enthralling masses who driven by the promise of uncovering their own secret histories.

Culturally, the dichotomy between sober truth and sensational fiction becomes hard to find, particularly in an era of rampant access to unverified information without context or depth of knowledge. Conspiracy theories derive their efficacy precisely from the thrill of uniting the seemingly factual with the scandalously outrageous – in the Middle Ages, just as in the present. 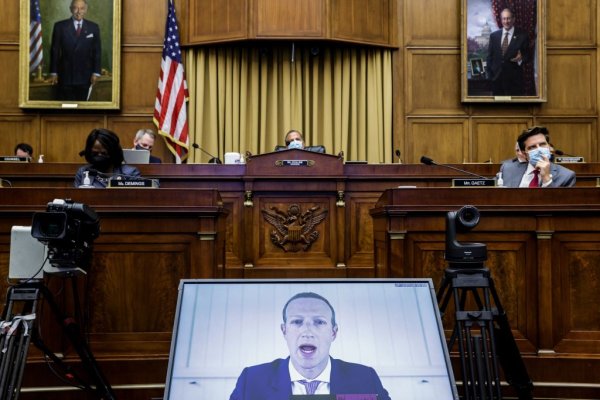 Facebook's "Oversight Board" Is a Sham
Next Up: Editor's Pick