Here's Why Experts Worry About the Popularity of QAnon's Conspiracy Theory

The bizarre pro-Trump QAnon conspiracy theory has burst from fringe websites into the real world this week, as dozens of attendees at two recent Trump rallies in Florida and Pennsylvania promoted it.

“It’s a movement, man. It’s the shift. I can feel it coming,” one Wilkes-Barre, Pennsylvania rally-goer told CNN on Thursday. “Some call it the great awakening,” he added.

The theory, which originated from anonymous messages posted online, purports to explain everything from the sinking of the Titanic to the appointment of Special Counsel Robert Mueller, weaving them into a grand narrative where President Donald Trump is a secret mastermind – and hero.

QAnon’s online clues — called “breadcrumbs” — are so vague, they can be hard to follow. But there has been no evidence to prove them.

At a press conference on Wednesday White House Press Secretary Sarah Sanders denied that Trump supports the group, “The President condemns and denounces any group that would incite violence against another individual, and certainly doesn’t support groups that would promote that type of behavior,” she said.

Footage from Trump’s rally in Tampa on Tuesday and a rally in Pennsylvania on Thursday shows attendees wearing T-shirts and carrying posters with the letter “Q” — a shorthand to identify followers of the conspiracy theory.

Here’s what experts say you need to know about QAnon and why the conspiracy theory has spread.

How did QAnon’s theories spread?

Conspiracies take off because the world is complex and people like things to make sense, according to Brooke Binkowski, former managing editor at the fact-checking website Snopes.com, which frequently debunks online theories.

“Conspiracy theories offer a neat package that wrap up all these events,” she says.

Sometimes, conspiracy theories can be debunked before they draw national attention. This is especially true when the source of the false information is identifiable and can be approached and corrected, Binkowski says. But when theories explode on platforms with anonymous posters — like 4chan, one of the sites where QAnon started — Binkowski says they can be much harder to stop.

“You don’t know who is spreading [the conspiracies] and why, or who is picking them up and why,” she says. “You can’t really confront the people who are responsible for these to their face or on social media, because you don’t know who is doing it.”

Is the QAnon conspiracy theory dangerous?

Before their recent appearance at Trump rallies, QAnon conspiracy theorists have mostly stayed online – at the fringes of most mainstream message boards and social media platforms. Though an armed man with an armored truck did block a highway near the Hoover Dam in June with a sign reading “Release the OIG report,” a demand that was prominent among QAnon followers.

But experts warn that conspiracy theories can lead followers to more dangerous behavior.

That happened in December 2016, when a 28-year-old North Carolina man, who believed a conspiracy theory — one that is still spread by QAnon followers — showed up at a Washington, D.C. pizzeria where he believed children were being harbored because of baseless claims relating to Hillary Clinton’s, John Podesta. The “Pizzagate” believer fired several shots from an AR-15 rifle, though nobody was injured.

More recently, an Arizona man used an armored vehicle to block traffic on the bridge near the Hoover Dam has used QAnon phrases in letters he wrote from jail to Trump and other elected officials.

Binkowski says she thinks the QAnon conspiracy theory could lead followers to commit acts of violence if they became convinced it was the only way to stop some imminent harm.

How can this kind of conspiracy theory be stopped?

The best way to stop the spread of misinformation is through the pursuit of actual information, according to psychologist Michael Wood, who specializes in the psychology of conspiracies and is a lecturer at the University of Winchester.

What role has President Trump played in QAnon?

The QAnon conspiracy may have gotten started when Trump made an off-hand remark about the “calm before the storm,” but the President appears to have no personal ties to the people behind it.

However, some say Trump’s repeated endorsements of other conspiracy theories – for example those about Barack Obama’s birth certificate, Ted Cruz’s citizenship and Supreme Court Justice Antonin Scalia’s death – have helped lay the ground for more dangerous conspiracy theories like QAnon.

“Trump hasn’t talked about Q specifically, but the popularity of Q probably owes something to Trump’s general usage of conspiracy theories — on the campaign trail, in speeches, in tweets and so on,” Wood says. “People’s idea of what are acceptable political beliefs depends, to some extent, on what kind of cues they get from political elites. Trump is, by usual standards of U.S. politics, quite a conspiracy theorist. So it makes sense that his base has followed suit.”

But Binkowski noted that people of any political persuasion can fall victim to conspiracy theories.

“Authoritarian conspiracy theories can prey on anyone across the political spectrum,” she says, adding that she doesn’t think “who is doing it really cares about politics so much as they care about control of power, and division and separation.” 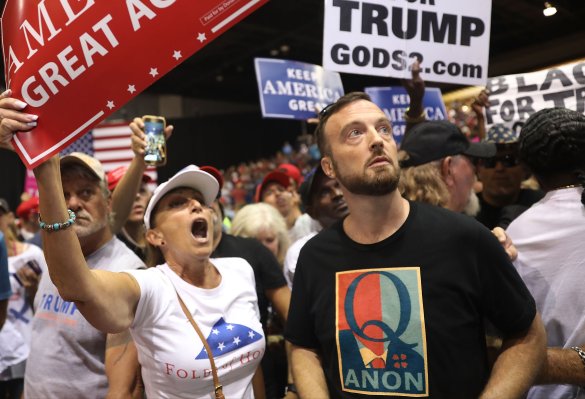