Myanmar protesters hold photos of General Min Aung Hlaing while calling for the end of the Myanmar military coup outside the United Nations headquarters for Southeast Asia on February 03, 2021 in Bangkok, Thailand
Lauren DeCicca—Getty Images
Ideas
By Gov. Bill Richardson
Bill Richardson is a former Congressman, Governor, U.S. Ambassador to the United Nations, and Secretary of Energy.

My last encounter with Aung San Suu Kyi, my friend of more than 20 years, was a painful one. I was invited to Myanmar in January 2018 as part of an international panel the government set up to advise on the Rohingya crisis. By that point, more than 700,000 Rohingya Muslims had been forced to flee their homes and two Reuters reporters had been jailed after uncovering evidence of mass graves.

At one meeting, I argued that Suu Kyi must let me help her take action to stop the atrocities committed by the Tatmadaw, as the Myanmar military is known, and to free the journalists. She refused. Soon after, I quit the panel and left the country. It was obvious she was complicit in enabling the atrocities, and was unwilling to accept the consequences.

Genocide and democracy are not compatible. You cannot turn a blind eye and enable mass atrocities in the name of saving a democratization project or to protect your own power. Suu Kyi’s appeasement of the Myanmar military empowered them to eventually take over by force, which they did in the early morning hours of Feb. 1. It also left her stripped of most of the international support and admiration she previously held, at a time she needs it the most.

To be clear, the perpetrator of the coup—and the entity to be held fully accountable—is the Tatmadaw. Just hours before the newly elected parliament was to be seated, the Tatmadaw detained de facto head of state Suu Kyi and dozens of other government and civil society leaders. Alleging baseless claims of mass voter fraud, the military transferred all power to the commander-in-chief and declared a year-long state of emergency.

The coup is a disaster for the people of Myanmar. It is also an opportunity for the Biden Administration to put into practice the core principles of its foreign policy approach, including restoring American commitments to diplomacy, multilateralism, and moral leadership.

The White House has signaled it would consider immediately imposing or reimposing sanctions on the military and their business interests, and they must follow through on that. Unilateral U.S. sanctions, however, would have little effect on their own, so the U.S. should use this opportunity to coordinate parallel sanctions as well as arms embargoes among its allies and, despite Chinese and Russian opposition, within the United Nations Security Council. Some U.S. allies in the region will be reluctant to impose sanctions, but the Biden administration can and should lean on Japan, India, Singapore, South Korea, and others to leverage their closer ties with Myanmar to express their disapproval.

The immediate objective of these efforts must be to apply pressure on the Tatmadaw to reverse the coup, respect the results of the November elections, and to allow the new Parliament to be seated. All those detained must be freed. Communications – internet and phone service – must remain open. But a reversal of the coup is not enough.

The U.S. must also establish a clear line in the sand that the international community will not tolerate crimes against humanity as a byproduct of the democratization process. Before the coup, Myanmar was a fundamentally flawed quasi-democracy at best. The military’s power and interests were guaranteed and written into the 2008 Constitution and Suu Kyi lacked the moral leadership to push for a democratic vision that respected and protected human rights. More than 800,000 Rohingya remain living as refugees in Bangladesh with no safe path to return to their homes in Myanmar and millions in Myanmar face a risk of violence and rights abuses. In order for Myanmar to continue its democratic journey, the atrocities committed against the Rohingya must end, and a safe return of the refugees guaranteed.

A return to the status quo would be a terrible mistake. For too long, the U.S. has been willing to look past Myanmar’s atrocities driven by the misplaced hope that a democratic Myanmar will emerge and the misplaced fear that a values-driven policy will drive Myanmar to China. But this bears repeating: genocide and democracy are not compatible.

The Biden administration has made a good start on its commitment to ensuring that human rights and democracy are the cornerstones of U.S. foreign policy. This is an opportunity for them to align U.S. values and interests, stand with the Myanmar people, and to prioritize the establishment of a genuine democracy and not one that tolerates genocide. 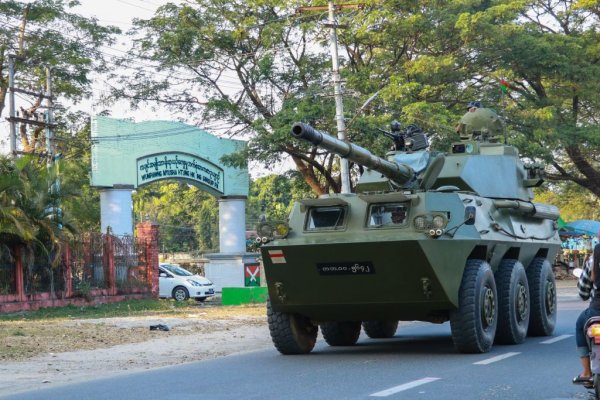 China Stands to Gain From the Coup in Myanmar
Next Up: Editor's Pick