Former New Mexico Governor Bill Richardson has resigned from an international advisory board on Myanmar’s Rakhine state, where recent army operations have been described as ethnic cleansing of the country’s Rohingya Muslim minority, calling the effort a “whitewash.”

Richardson, also a former U.S. Ambassador to the U.N., concluded a three-day visit to the country with a frank statement of “great disappointment,” saying that he cannot in good faith remain on a board that is “likely to become a cheerleading squad for government policy.”

Richardson criticized Myanmar’s de facto leader Aung San Suu Kyi for her lack of “moral leadership” amid the crisis; the Nobel laureate and democracy icon has come under increasing censure for her failure to stop or denounce military atrocities committed against the Rohingya.

He also said that he was “extremely upset” by Suu Kyi’s “furious response” when he urged her to address the detention of two Reuters reporters accused of violating the country’s draconian Official Secrets Act. The case caused international outrage and is viewed as an attack on press freedom.

His departure from the board is a serious blow to the credibility of Suu Kyi’s civilian government, which is floundering amid the crisis. At least 688,000 Rohingya fled to neighboring Bangladesh since an insurgent attack on the military triggered brutal reprisals.

Top U.N. officials have described the military operations as “ethnic cleansing” and suggested that they could amount to “genocide.” Defense Secretary Jim Mattis said the violence could be even “worse” than portrayals in the international media.

The multinational, 10-member advisory board was formed last year to advise Myanmar on implementing the recommendations a previous commission, headed by former U.N. Secretary-General Kofi Annan.

But on his visit this week, Richardson said he was “taken aback by the vigor” with which Myanmar government officials blamed international actors for the crisis, as well as the government’s “lack of sincerity” on the issue of Rohingya citizenship. Nearly all of the estimated 1.1 million Rohingya are stateless.

Richardson boycotted a planned visit to a relocation camp, where Myanmar intended to temporarily house refugees upon their return, dismissing the trip as “a big photo-op,” according to the Associated Press. Myanmar and Bangladesh have reached a provisional agreement to return hundreds of thousands of refugees over the next two years, but rights groups and U.N. agencies warn it’s too soon to ensure a safe and voluntary return. 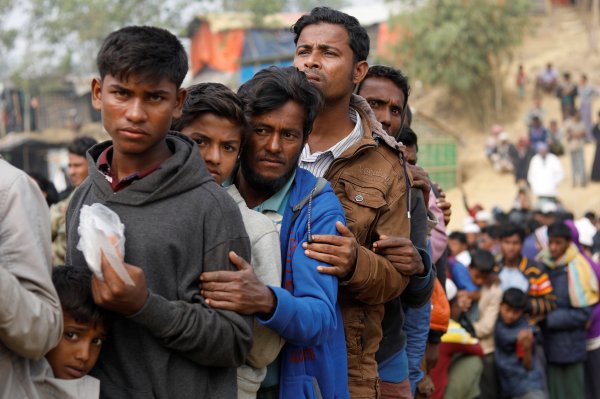