Bill Richardson: How the West Can Help Fix the Rohingya Crisis

Ideas
By Bill Richardson
Richardson is a former Congressman, Governor, U.S. Ambassador to the United Nations and Secretary of Energy.

Something is rotten in Myanmar. In less than 18 months, 800,000 Rohingya have fled from Rakhine State to Bangladesh to escape brutal clearance operations carried out by Myanmar’s military, in the wake of attacks by a new Rohingya militant group. Doctors Without Borders estimates that at least 6,700 Rohingya have been killed in one month alone. In November, U.S. Secretary of State Rex Tillerson joined a chorus in calling the situation in Rakhine ethnic cleansing; others suspect even worse. Meanwhile, conflict in Kachin and Shan States is escalating; religious intolerance is increasing; and economic and social reforms are stalled.

And yet Aung San Suu Kyi, Myanmar’s de facto head of state, has shown neither an understanding of the seriousness of the challenges her country faces, nor the political will to meaningfully address the Rakhine crisis. While Aung San Suu Kyi does not have control of the military — and in fact needs their support to pursue constitutional reform and progress in the ethnic peace process (which is viewed as largely distinct from the conflict in Rakhine) — she has failed to show moral leadership on Rakhine and appears unwilling to listen to frank advice. Moreover, Aung San Suu Kyi’s government lacks both the will and the capacity to faithfully implement the recommendations of the Kofi Annan–led Rakhine Advisory Commission, which provide a blueprint for overcoming the host of challenges facing Rakhine State.

While the military and, to a lesser extent, Rohingya militants as well as some Rakhine are to blame for the violence, it is becoming increasingly clear that Aung San Suu Kyi is part of the problem. Moreover, barring unexpected developments, Aung San Suu Kyi and her party are likely to win elections in 2020, albeit with a diminished majority, and she could stay on as State Counsellor through 2025. Even worse, any alternative to Aung San Suu Kyi is likely to be even more illiberal on Rakhine. This creates a quandary for the U.S. and other governments whose misplaced hope in Aung San Suu Kyi is a bitter pill to swallow.

Absent political will in Myanmnar and access to Rakhine, and facing increasing pressure from rights groups and other domestic constituencies to act, what can the West do? Unfortunately, the space to help Myanmar correct course is narrow and shrinking, though a few imperfect options exist.

First, donor governments and humanitarian agencies should withhold both political and financial support to the hastily planned repatriation process for refugees in Bangladesh — unless Myanmar can ensure that returns are safe, voluntary, dignified and sustainable. More broadly, the West should only commit development support to central and northern Rakhine State if Myanmar agrees to clear conditions and both sets and achieves benchmarks before further support is disbursed. Less scrupulous donors may undercut such an approach, but that is insufficient justification for propping up the structures that fostered the current crisis.

Pulling out completely, however, would be counter-productive. It would push Myanmar to retrench further and towards neighbors, such as China, who are keen for influence but whose approaches in Rakhine could spark further violence by exacerbating local communities’ grievances about respect for basic rights and the inequitable distribution of resources. The West must therefore find ways to continue to stay engaged to, at a minimum, forestall a further deterioration. The international community could start by seeking to better understand and address the political and economic grievances of both the Rakhine and Rohingya populations and by providing support to local groups that are quietly working to build resilience and improve socioeconomic well-being. Such efforts would help Western governments to convince Myanmar of their genuine desire to help the situation in Rakhine.

In the meantime, however, further punitive measures must be considered, even if they are largely symbolic. At a minimum, Western governments should impose targeted sanctions against military officials implicated in human rights abuses. Other efforts, such as the pursuit of a UN Human Rights Council–mandated Commission of Inquiry or a fresh push for action through the UN Security Council, are likely to prove either ineffective or unviable, though they would nonetheless signal the international community’s concern to both Myanmar and domestic audiences. Broad-based economic sanctions should remain an option, but are blunt tools that should only be used as a last resort.

The international community should nonetheless continue to push for efforts to establish accountability mechanisms, such as a joint Myanmar-international investigation into human rights abuses and the mass graves discovered in Rakhine thus far; while Myanmar’s intent to hold 16 people, including some military officials, accountable for the extrajudicial killings at Inn Dinn, its response to recent media reports of new mass graves does not bode well for such an endeavor. Nonetheless, efforts to meticulously document what has occurred may provide opportunities to hold perpetrators accountable in the future or to help facilitate eventual efforts to establish the truth and promote reconciliation.

There is more scope for international influence and support on the Bangladesh side of the border. The West should continue to praise Bangladesh’s magnanimity in hosting hundreds of thousands of Rohingya refugees, though the international community should not take it for granted. Tension between refugees and their Bangladeshi hosts are already on the rise, as prices in local markets and competition for unskilled work have increased. Meanwhile, Bangladesh has repeatedly threatened to relocate refugees to an uninhabitable island in the Bay of Bengal and has not yet granted UNHCR a formal role in managing refugee populations or planned repatriation efforts. While continuing to ensure that basic humanitarian needs are met, particularly as the monsoon season approaches, Bangladesh and partner governments must begin to move from crisis response to a long-term strategy that recognizes that few Rohingya will soon voluntarily return to Myanmar.

International donors should partner with Bangladesh to organize a major donor conference to provide Bangladesh with the financial and technical support required to ensure that refugees’ humanitarian and development needs are met and their rights protected. Such a strategy could comprise three broad components. First, some refugees — particularly those with no desire to return to Myanmar in the medium-term — should be allowed to relocate away from the border with Myanmar to other parts of Bangladesh. Second, camps in the border areas should be formalized for those refugees that have some hope of returning to Myanmar in the future. Because of domestic political imperatives, Bangladesh will resist accepting a large and sustained Rohingya presence on its soil, so it must be provided with the resources to cope. The international community must also convince Bangladesh that the best means of dampening the allure of radicalization among refugees is through social integration, providing refugees with work permits and respecting their fundamental rights, including by ensuring refugees’ participation in repatriation efforts is voluntary. Third, states in the West and those that already shelter large Rohingya populations should welcome Rohingya refugees to their own countries through a third-country resettlement process. Despite nativism taking hold in the U.S. and Europe, moral outrage over the plight of the Rohingya should be backed by more than financial support alone.

The situation could easily get worse. The Rohingya that remain in Rakhine, especially those close to the border with Bangladesh, could become refugees themselves, adding to the strain on Bangladesh and other countries in the region. Rising tension between the Myanmar government and the Buddhist Rakhine community could spark a new wave of violence that makes it even more difficult to address the root causes of conflict in Rakhine. And Rohingya refugees in Bangladesh could fall prey to radicalization, deepening a cycle of violence that spreads well beyond the Myanmar-Bangladesh border. In the absence of far greater action from Myanmar, the international community must demonstrate the political will and moral authority needed to avert an even greater crisis. 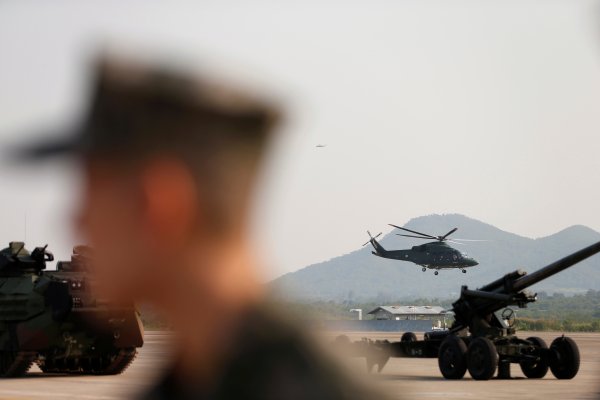