It was almost too good to be true. “I’m going to build the public exactly what they’re looking for, and I’m going to knock the hell out of Detroit doing it,” said Liz Carmichael in 1974. She was speaking about the Dale—a three-wheeled, low-cost, high-efficiency car, which she claimed would upend America’s automobile industry. Carmichael, a charismatic entrepreneur with a bold and convincing vision, ran the 20th Century Motor Car Company behind the Dale. Although not public knowledge in 1974, Carmichael was a transgender woman with a colorful backstory; she had a history of crime, and had been on the run from the authorities for several years, moving from town to town across the U.S. with her wife and their five children.

As media scrutiny of the Dale intensified, so did attention on Carmichael’s gender. She was outed the following year by local media networks, which conflated questions about the potential fraudulence of the 20th Century Motor Car Company with questions about Carmichael’s identity as a woman. “When the media couldn’t decide if the car was a fraud, they started focusing on Liz,” says Susan Stryker, historian and Barbara Lee Distinguished Chair in Women’s Leadership, Mills College, who was a consulting producer on the new HBO docuseries The Lady and the Dale, based on Carmichael’s life.

Directed by screenwriter Nick Cammilleri, whose interest in Carmichael was piqued by her appearance on a 1989 episode of Unsolved Mysteries, and artist and producer Zackary Drucker, the series features interviews with Carmichael’s family and associates as well as those who were suspicious of her, building up a multidimensional portrait of a complicated trailblazer. “So many trans themes in Liz’s story persist,” says Drucker, who was a consultant and producer on the award-winning series Transparent. “Uneven access to gender-related health care, employment discrimination, the disproportionate incarceration of trans people, the necessity to survive based on the underground economy, and of course, being publicly humiliated and made an example of in the media, having your identity called into question.” It’s these themes that make The Lady and the Dale compelling viewing, and a story with much relevance in 2021.

The complex character behind The Lady and the Dale

Born in 1927 in Indiana, Carmichael had a reputation for being adventurous, mischievous and a bit of a troublemaker. Carmichael served in the U.S. Army overseas in Germany and had three brief marriages by the time she met and married Vivian Barrett in 1959. By the early 1960s, the FBI had built up extensive files on her for her part in various cons she implemented throughout her time selling everything from vacuum cleaners to knitting machines, which included counterfeiting schemes embezzling downpayments from customers. Candi Michael, one of Liz and Vivian’s five children, recalls that growing up, they rarely stayed in the same place longer than two months on account of the fear that Liz would be discovered by authorities.

Carmichael started her transition in her 40s, in the late 1960s; the couple’s children were encouraged to address her by her new name, and Candi recalls hearing Liz speaking into a recorder, training her voice to sound different. “In a lot of ways, Liz was typical of trans women of her generation,” says Stryker, explaining that it was difficult to find information about, and access the means of, transitioning. It wasn’t uncommon for transitions to happen later in adulthood, and that created a challenge at times for Carmichael. “I think all of the issues that she faced as a trans person were very routine for trans people at the time. And it’s something that can make trans people vulnerable, even now, if you don’t have what people call ‘cisgender passing privilege,’” Stryker says.

After Carmichael transitioned, she found it tough to gain employment, but with her persuasive abilities as a salesperson, she eventually found a job in real estate, followed by a role at a marketing company. At the height of the Middle East oil crisis in 1974, Carmichael appeared to have stumbled on an innovative solution to the scarcity; the three-wheeled car that promised high mileage to the gallon. Carmichael bought the car from its original inventor and proclaimed it “the Dale,” creating the 20th Century Motor Car Company and recruiting a roster of engineers to help build and manufacture the car. “The Dale was always the heart and soul of Liz Carmichael,” says Cammilleri, who spent close to 10 years meticulously researching Carmichael’s life. “I really came to understand who Liz was, and she had more courage than most people have in the world. She never conceded a day in her life as Liz Carmichael.”

As a teenager, Stryker remembered seeing the Dale make an appearance on The Price Is Right, but didn’t remember anything about Liz Carmichael being trans until an Unsolved Mysteries episode featured the rise and fall of the entrepreneur and the car. When Carmichael first encountered the car, it was a new invention with kinks to work out; her 20th Century Motor Car Company claimed to develop the car to make it not only roadworthy, but a new automobile that would rival the Ford Model T in terms of its innovation. “I do think that she legitimately, genuinely was trying to make this car. And I would say that her reach exceeded her grasp in some ways,” Stryker says. “But that’s part of what makes the story so messy and complicated and fascinating, is that it really does blend together bulls-it with authenticity.”

As the Dale gained more publicity, Carmichael created a public backstory she shared in interviews; she claimed to be a mechanical engineering graduate of Ohio State University, and the widow of a NASA graduate with five children while her real wife Vivian posed as her assistant or her sister-in-law. And as investors became fidgety while questions grew about the Dale’s viability and the 20th Century Motor Car Company’s dubious business practices, local television news anchor Dick Carlson, father of conservative pundit Tucker Carlson, outed Carmichael as trans on air. (Carlson also outed tennis player Renee Richards, in 1976.) Before the Dale was even released, Carmichael was arrested for fraud and business violations and housed in the Men’s Central Jail in Los Angeles, where she was beaten severely. Her trial became one of the longest in Los Angeles’ criminal court history.

But it was her identity, as much as her business dealings, that came under scrutiny during the trial. She was found guilty of grand theft and of securities violations, but left town before the final sentencing in December 1980. Carmichael moved to Austin, Tex., where she started a flower business with her children, recruiting sellers who were homeless. She was later apprehended after a tip-off following the Unsolved Mysteries episode, and was incarcerated for 18 months in a men’s prison.

Where the media of the 1970s sought to frame Carmichael as deceptive, and the Dale, by extension, as a fraudulent scheme, The Lady and the Dale disentangles the two stories from one another. “The notion that Liz was a man masquerading as a woman to commit fraud was so persistent, that I think she was never included in trans history,” says Drucker, who explains she was a little skeptical of Carmichael’s story when she was first approached about the project, in part because she had never heard of the entrepreneur. “The incredible stories of trans people through time are often lost to misgendering, lost to documents being destroyed by municipalities, who were perhaps embarrassed that people came from that town,” she says, adding that the series producers were unable to find a birth or death certificate for Carmichael, who died of cancer in 2004.

In making the documentary, Drucker was most surprised by how little some of the attitudes from Carmichael’s contemporaries had changed over more than four decades since the Dale was at the height of its fame. She recalls sitting in interviews with men who had worked with Carmichael, and who had respected her, and hearing them say transphobic things. “So many of these people were not reading or identifying me as trans, I think that it allowed them to feel free to say whatever,” she says. “I feel strongly that Liz’s story was never told fairly or accurately in her lifetime, and that she passed, having never rectified that. It’s my job, in 2021, to really give her a fair shake.”

The trope of transgender people not truly being the identity they say they are has persisted through history, and has been used to criminalize, incarcerate and discriminate against trans and gender variant people. As Stryker explains in the series, these broader histories speak to both Carmichael’s experience as well as our current times. “Trans people being hounded by police and media is not something that is just a present day concern. It’s been since there have been police and since there has been mass media,” she says, pointing to the story of Charles Hamilton, who was outed, arrested and charged with fraud in the 18th century, and whose story was sensationalized in a short novella called The Female Husband. “We haven’t left the context that emerges in the early 18th century in western Europe, of urban policing, the criminalization of gender difference, and the exploitation of gender variant peoples for commercial purposes. We’re still there,” says Stryker.

In recent years, there have been more authentic and positive representations of trans people and characters on bigger platforms, often created by trans storytellers. Transparent, Pose and Orange Is the New Black are some of the examples cited in the 2020 documentary Disclosure, which traced the representation of trans people on film and television from the earliest moving pictures up to the present day.

For Drucker and Stryker, who both featured in Disclosure, telling Carmichael’s story shows that there can be room for flawed, complicated characters too. “I feel like in the scope of trans representation, over the past several years, we’ve been conscious of the long history of misrepresentation and trying to correct that,” says Drucker. “And Liz, I hope, will catalyze a new era of telling more complicated stories about trans people who did make mistakes and were flawed and yet were still mothers, sisters, humans—still adored and loved.” 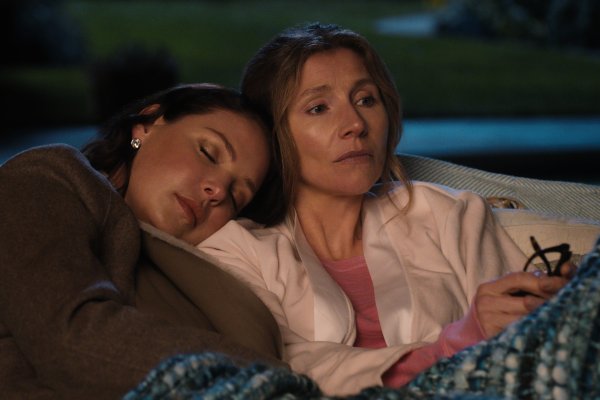 What to Know About the Book Behind Netflix’s Firefly Lane
Next Up: Editor's Pick