It’s been a difficult four years for Nelly Munyasia. In 2016, Munyasia’s organization, Reproductive Health Network Kenya (RHNK), which helps Kenyans access health services and information including about abortion, got all of its funding through Planned Parenthood Global. When Donald Trump took office and reinstated the Mexico City policy, which bans U.S. aid to groups that make referrals for abortion or discuss abortion as an option abroad, RHNK lost 100% of its support. Since then, the executive director has had to lay off eight of her 13 staff members, stop relying on her network of volunteers, pause training for over 500 medical workers and ultimately cut the number of women and girls she helped access health care in half.

The shift also pushed Munyasia to start paying attention to U.S. politics, and to grow excited when President Joe Biden was elected this past November after saying he planned to reverse the policy. “We’ve kept the hope alive, knowing that he’s going to support this,” she says. “I saw the lives of women and girls being prioritized again. And women and girls having an opportunity to live a meaningful life and then being able to make a decision about what they want in their lives and their sexuality.”

Now her hope is coming true. Biden will rescind the Mexico City policy—sometimes called the “global gag rule“—on Jan. 28, in another rollback of a Trump policy that will bring major changes to reproductive health and rights around the world. The president already announced the U.S. will rejoin the Paris climate agreement and will not leave the World Health Organization, which both served to show the U.S.’s commitment to rejoining the world stage. And he could still take other actions including restoring U.S. funding to the United Nations Population Fund (UNFPA), the UN’s agency on family planning and maternal health. However, while women’s health care advocates are hailing the new changes by Biden, experts also say reversing the impact of Trump’s moves will be a much longer process.

The Mexico City policy dates back to Ronald Reagan and has been introduced by every Republican president and rescinded by every Democratic one since then. Despite its focus on limiting U.S. support for abortions, research has shown it hurts sexual and reproductive health services, has stopped or reduced U.S.-funded HIV programs and even leads to more abortions.

But Trump expanded the ban from covering family planning funding (about $600 million per year) to cover all U.S. global health aid (about $9 billion a year). That means dozens more NGOs in more than 60 countries around the world that receive funding from the State Department, USAID, the Department of Health and Human Services and the Department of Defense were all subject to the ban. And in 2019, the Trump Administration went further, expanding the ban to mean that no organization receiving U.S. global health funding could provide any financial support for an organization that does not comply with the policy.

Those expansions severely restricted the work of all different kinds of organizations, says Serra Sippel, president of the Center for Health and Gender Equity (CHANGE) in part because global health programs have evolved to become more integrated. “That means that you have HIV programs, you have family planning, maternal health, and water and sanitation—these programs are all integrated,” she says.

In many countries these restrictions not only led to less funding for reproductive and sexual health services, but also caused health clinics to close, fewer health care workers to be trained and whole programs to be canceled. The International Planned Parenthood Federation (IPPF), one of the few large NGOs that refused U.S. funding rather than accept the Mexico City policy, estimated it lost $100 million, which could have prevented 4.8 million unintended pregnancies, provided 725,000 HIV tests and treated 525,000 sexually transmitted infections, among other outcomes. MSI Reproductive Choices, another large group that rejected U.S. funding, lost $30 million and says it could have prevented 6 million unintended pregnancies, 1.8 million unsafe abortions and 20,000 maternal deaths.

But Biden’s reversal of the policy won’t immediately change the situation on the ground. “It doesn’t magically disappear with the stroke of a pen, unfortunately,” Sippel says. It can take time for news of the new policy to reach every international organization around the world that receives U.S. funding or that works with organizations that receive U.S. funding. IPPF had to stop programming in 32 countries around the world when the policy was reinstated in 2017, which means it now has to do the work of reestablishing those programs, says Riva Eskinazi, the organization’s director of strategic partnerships and development. The expanded ban also means that each of the U.S. agencies that give global health aid will need to revise their contracts and communicate those changes to organizations they work with. Policies also need to be translated into relevant local languages, which can take time.

While organizations want to work quickly, some of the timing will be determined by when grants are available. Smaller organizations might be able to start receiving funding more quickly from USAID missions overseas, experts say, but larger ones will need to wait for new funding cycles to open. When President Obama rescinded the policy in 2009, it took more than 18 months for IPPF to have an opportunity to apply for U.S. funding again, and once they were awarded a grant, it took another year to turn that funding into the new project.

In Kenya, Munyasia was able to get some funding from Rutgers, a Dutch reproductive rights and health organization, in 2018. But that is ending soon, and Munyasia believes it could be at least six or eight months after the U.S. shift before her organization will get new funding.

As these changes are working through the system, groups will have to communicate clearly about what services NGOs in each country can start providing. The Trump policy was so extensive that it caused some organizations to overreach and cancel programs or curtail services simply because they were confused or afraid of violating it, says Sarah Shaw, MSI Reproductive Choices’s head of advocacy.

It also caused organizations to take precautions that made collaboration more difficult, she says. The MSI program in Kenya, for example, can not attend informal meetings for the country’s family planning working group because other organizations in attendance that do receive USAID funding don’t want to risk getting investigated for supporting an organization that does not comply with the Mexico City policy. “It destroyed partnerships. We stopped getting invited to technical working groups and spaces like that, where we can share our evidence and data and insights,” Shaw says.

All of these changes make it difficult for organizations to plan or implement long-term projects, says Jonathan Rucks, senior director at reproductive rights organization PAI. “It really undermines the U.S.’s ability to partner with providers because it undermines our stability. And really questions, is the U.S. committed to working with us for over the long haul?”

That’s true of the moves Trump made beyond the Mexico City policy as well. Trump’s Administration also withdrew U.S. funding from UNFPA, alleging that the agency participated in forced abortion services in China—a claim that past Republican administrations have also made and that UNFPA says is not true.

“In the past four years, the U.S. was absent and we felt that as a big vacuum, but more than that there were misinterpretations of what UNFPA is doing,” Dr. Natalia Kanem, executive director of UNFPA, tells TIME.

In 2016, the U.S. provided $69 million to the UNFPA. While the agency has been able to raise funds from other countries around the world in the U.S.’s absence, Kanem says the leadership gap was damaging on its own. The Trump Administration also led a group of countries to sign the “Geneva consensus declaration,” an anti-abortion declaration that aims to support women’s health without access to abortion, and even though it was nonbinding, its introduction could have lingering effects on how other countries view the issues of reproductive health and rights, she says.

Women’s health advocates are hoping Biden will take more steps to shore up U.S. support for reproductive rights abroad by supporting the Global Health, Empowerment and Rights (Global HER) Act, which would permanently eliminate the “gag rule.” For now, Kanem is hopeful Biden will restore funding for UNFPA and is eager to start working with the new Administration on what she sees as a long road to moving the needle in favor of women’s health.

“The united voice of world leadership, to never relent on the idea that a girl should have a fair shot at life, just like a boy—this is very, very important for those sustainable development goals to happen by 2030,” she says. 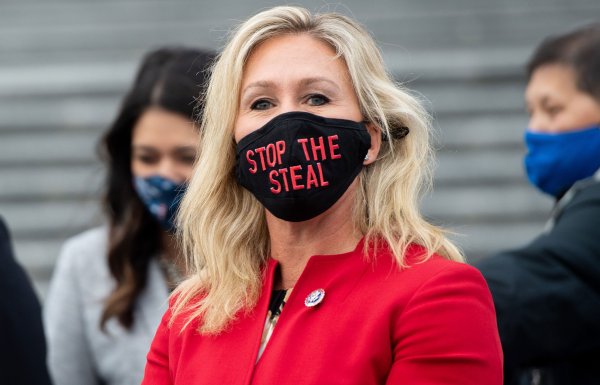 Why Republicans Can’t Win on Marjorie Taylor Greene
Next Up: Editor's Pick