President Joe Biden’s White House communications staff have emphasized the importance of truth, transparency and trust in the opening days of his presidency as they resume regular press briefings and distance themselves from the combative style of the Trump Administration. So when Press Secretary Jen Psaki began her briefing on Monday by announcing that American Sign Language (ASL) interpreters would now be present at all White House news briefings, many deaf and hard of hearing Americans celebrated this historic first.

But it turns out the first ASL interpreter chosen was not such a change from the previous Administration after all. Heather Mewshaw, who Psaki introduced on Monday as “today’s interpreter, Heather,” also appears to manage a group of ASL interpreters who provide sign language accompaniments to right-wing videos. Some of these videos have featured vaccine misinformation, conspiracy theories about the 2020 election and the Jan. 6 riots at the Capitol, and false claims about Michelle Obama being transgender, according to a review of social media posts by TIME.

“WHAT REALLY HAPPENED On January 6th?” reads the title of a video featuring Mewshaw interpreting Trump lawyer Rudy Giuliani posted by the group on the social platform Rumble, an alternative to YouTube popular on the right. A video billed as “DR. EXPLAINS COVID VACCINE” shows Mewshaw interpreting another video by Trump-approved Dr. Stella Immanuel, a controversial physician who has promoted hydroxychloroquine and claims that real medical ailments are caused by demon sperm.

“Joe Biden is literally and legally not the President elect,” read the headline on one Facebook video from December in which another interpreter in Mewshaw’s group interprets comments made by right-wing personality Candace Owens.

Mewshaw’s group, which was originally known as Right Side ASL and had pages on Facebook, Twitter, Instagram and far-right app Parler, changed its name to Hands of Liberty after its previous Facebook page was deleted in November. “Sad News: Our Facebook Page, Right Side ASL Backup, has been flagged for violating community standards and will be taken down at any time. It’s up to Facebook to decide. Not us,” read a post on the Hands of Liberty ASL page on Nov. 17.

The post was titled “Admin Update” and featured a video of Mewshaw signing in ASL. The same post also said the group was closing its Twitter, Instagram and Parler accounts, but encouraged followers to find it on MeWe, a Facebook alternative, and Gab, another app frequently used by right-wing extremists that saw increased interest around the time of the Capitol attack. A comment on the “Admin Update” post was addressed to “Heather” and was responded to by the page’s administrator.

Neither the White House nor Mewshaw responded to requests for comment, but after TIME reached out to Mewshaw on Tuesday, the Hands of Liberty ASL Facebook page was taken down.

The Hands of Liberty interpreters are volunteers, according to the group’s social media accounts, and each video features a disclaimer saying that the video does not belong to them. “This isn’t our original video. Hands of Liberty provides, upon request, ASL interpreting accommodations to the Deaf community for inaccessible online video content. This service is provided by volunteers,” the disclaimers read. “Remember that censorship is considered an act of violence and oppression that causes trauma to everyone involved.”

While the group frequently solicits requests from the public, the vast majority of videos it has chosen to interpret, with the notable exception of the recent White House press conferences, are right wing or pro-Trump in their sentiment. In a Jan. 20 video titled “Thank You President Trump From the Right Side ASL Team!,” Mewshaw signs along with a compilation video of Trump dancing to the song YMCA.

For some members of the deaf and hard of hearing community, the inclusion of Mewshaw in kicking off the new White House initiative soured what should have been purely a moment of excitement. People with disabilities have been advocating for more inclusion in politics for years, and the 2020 presidential campaign saw Democratic politicians embrace them in an unprecedented way. During the presidential transition and at Biden’s inauguration, staff prioritized accessibility, providing ASL interpretation, live closed captioning and audio descriptions for all inaugural events.

“I was honestly surprised,” Jon Henner, an assistant professor at the University of North Carolina Greensboro who studies ASL and is deaf, said in an email. “For me, it would be problematic for someone who has aligned herself with alt-right discourses to be the public face of the White House for the deaf communities and people who are curious about ASL.”

The National Association of the Deaf, which sued the Trump Administration last year for not providing ASL interpreters during White House briefings on the coronavirus, said it was glad to see the Biden Administration was changing tack. “The National Association of the Deaf (NAD) is gratified to witness history in the making with the Biden-Harris White House declaring that all of their press briefings will have American Sign Language (ASL) interpreters to be truly inclusive,” Howard A. Rosenblum, CEO of NAD, said in a statement to TIME.

But when asked about Mewshaw’s group and posts, Rosenblum said the White House needs to thoroughly vet interpreters to make sure they comply with federal law. “Providing appropriately qualified American Sign Language interpreting access requires more than just randomly hiring an interpreter who knows sign language. Care must be taken by everyone who hires an ASL interpreter to ensure that they are properly vetted for any interpreting job, whether it is a medical appointment, a job interview, a court proceeding, or a White House press briefing,” Rosenblum said. “Federal law defines a qualified interpreter as one that is able to interpret effectively, accurately, and impartially. Consequently, the White House needs to ensure that it properly vets the interpreters that handle their press briefings to ensure that their qualifications meet the federal standard.”

Mewshaw holds three certifications from the Registry of Interpreters for the Deaf (RID), a national membership organization for interpreters. There is no indication that Mewshaw has signed inaccurately at the White House or in past work, and no one TIME spoke with alleged that she had.

The Registry of Interpreters for the Deaf and the National Association of the Deaf also have a Code of Professional Conduct, which is designed to guide interpreters and recommends that interpreters both disclose and avoid any “actual or perceived conflicts of interest” in their work. Henner, who has been critical of Trump on social media, says that Mewshaw’s videos, particularly those relating to overturning the election, could arguably constitute a conflict of interest when it comes to interpreting for the Biden White House. Any complaints about a potential violation of the code would need to go through RID’s official ethics process and be investigated by its panel of adjudicators, RID told TIME.

Regardless of a specific violation, Henner says the incident shows the importance of hiring the right ASL interpreter for the situation. He does not believe it’s possible for any interpreter to be completely free of bias, which is why it’s important to understand what someone’s beliefs are when deciding whether to trust them to get a message right.

“Pres. Biden selected Jen Psaki to be the White House Press Secretary because Kayleigh McEnany would not be an appropriate choice because of who she worked with, and her ideological leanings,” he said. “Do we have the same considerations for the interpreter who also worked for the Trump White House and more than likely has the same ideological leanings?” 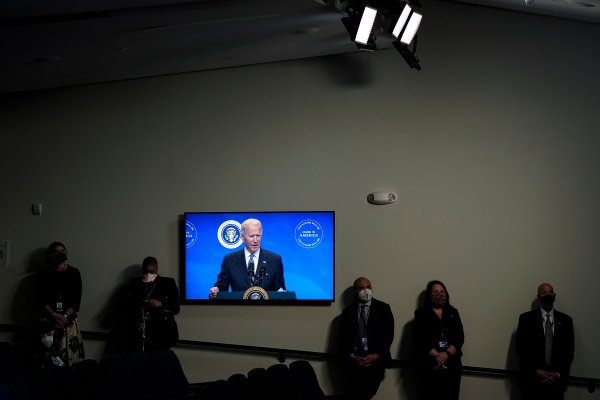 What President Biden's Call With Putin Means for U.S.-Russia Relations
Next Up: Editor's Pick