But even as these milestones pass, people with disabilities remain more than twice as likely to live in poverty as nondisabled people, less likely to graduate high school or hold a job, and are overrepresented in prisons and jails across the country.

Massachusetts Sen. Elizabeth Warren on Thursday became the latest Democratic presidential candidate to release a plan aimed at tackling many of these issues. In a 16-page policy, Warren outlined a series of proposals to reform Social Security benefits, boost employment for people with disabilities, increase funding for education and enhance protections for voting, housing and civil rights.

“Though we have made significant progress for the 61 million Americans living with disabilities, we have a lot of ground left to cover,” Warren’s plan says. “People with disabilities are still fighting for economic security, equal opportunity, and inclusion – and they are not fighting alone. As President, I will work in partnership with the disability community to combat ableism.”

Several other Democrats, including former South Bend, Indiana Mayor Pete Buttigieg, former HUD Secretary Julián Castro (who dropped out of the 2020 race Thursday morning) and Sen. Kamala Harris (who dropped out in December), released disability policies last year, while Warren had previously integrated disability issues into her other campaign proposals. But while disability rights have not historically been a hot-button topic, one in four Americans has a disability and Democrats this cycle are starting to pay more attention.

Warren says her administration would create a National Office of Disability Coordination to ensure federal programs work together to support people with disabilities. The plan would end the “shameful” sub-minimum wage that allows employers to pay disabled people below the minimum wage, and increase funding for civil rights enforcement at the EEOC and the Justice Department to combat workplace discrimination. It would also prioritize hiring people with disabilities for federal government jobs, as well as for federal contracts and internship programs.

Warren’s plan identifies systemic problems and proposes specific reforms aimed at changing those institutions. Disabled people often have limited incomes, for example, which means they can be at higher risk of identity theft, financial abuse and fraud. To fight against this, Warren proposes creating a new position at her signature Consumer Finance Protection Bureau that would expand the agency’s services for disabled people.

Warren has previously released a plan to expand Social Security benefits more broadly, but in this policy she also says she would implement other reforms to Social Security Disability Insurance (SSDI) such as getting rid of the “benefit cliff” that currently means recipients who earn more than a certain amount per month lose their entire benefit. She would also make changes to Supplemental Security Income, including getting rid of asset limits and eliminating penalties that make it difficult for some people with disabilities to get married and keep their benefits.

These changes are similar to what Castro proposed last year and have been priorities for many disability activists as they seek to get presidential candidates to prioritize disability issues on the campaign trail. When Castro dropped out of the 2020 presidential race on Thursday, Warren was quick to thank him for proposing “bold and progressive plans.” Warren’s staff consulted with a range of experts when putting her plan together, including former Sen. Tom Harkin, one of the original sponsors of the ADA, as well as the Center for American Progress’s Rebecca Cokley and founder of the Women’s March Disability Caucus Mia Ives-Rublee, who is now on Warren’s staff.

The Massachusetts Senator mentioned a number of disability rights activists in her plan and credited their work, emphasizing that she wanted to build on the significant victories they have achieved in the past, something she often does when introducing new policies or making big speeches.

Warren’s plan also includes her version of Medicare for All, which will cover direct support and home health services that can be important to some people with disabilities. Warren also says she will improve Medicaid’s coverage of long-term supports and services to ensure people can live in their communities instead of prioritizing institutions.

When it comes to education, Warren, like many of her fellow Democratic candidates, wants to fully fund the federal government’s share of the Individuals with Disabilities Education (IDEA) Act. “As a former public school special education teacher, I understand how much those dollars matter in the classroom,” she says in the plan. She also highlights that she has already committed to expanding funding for early intervention services and promises to ensure that all participating child care centers in her universal child care plan are ADA accessible.

Warren also says she wants to make sure people with disabilities have access to quality higher education experiences and says she will enforce laws against discrimination and implement delayed Department of Education regulations to ensure that students of color with disabilities are treated fairly.

Criminal justice reform is another major focus of Warren’s policy, as people with disabilities face disproportionate rates of incarceration and are at higher risk of violence by law enforcement. Her plan states that she would establish a federal standard for use-of-force and increase funding for law enforcement training. Warren would also work to decriminalize homelessness, improve response to mental health crises and end policies like cash bail that can all impact people with disabilities. Warren’s plan also promises to protect the rights of people with disabilities in prison and mandate better data collection on how prisons treat disabled inmates.

After a strong autumn, the Senator has recently dipped in the polls and slowed in fundraising in comparison to her top rivals, but disability voter turnout surged in 2018 and disabled voters could be an increasingly important bloc in 2020. 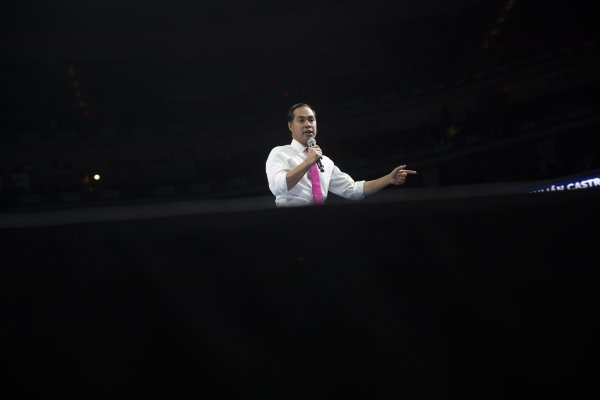 Julián Castro Ends His 2020 Presidential Campaign
Next Up: Editor's Pick