People With Disabilities Face Challenges Campaigning for Office. This Group Wants to Change That

When Alexandria Knox was preparing for her New Hampshire legislative race, she had some questions about how best to handle her blindness on the campaign trail. The National Council on Independent Living had the answers.

“People with disabilities are not empowered enough and they’re not told you can be a leader, you can do this,” Knox told TIME after the program’s inaugural webinar in early June. “It’s really great what this organization is doing to encourage and equip strong leaders like me to be involved in politics.”

The American political class has become increasingly diverse in recent years, but people with disabilities remain extremely underrepresented — apart from a few notable politicians, including Texas Gov. Greg Abbott, a paraplegic, and Illinois Sen. Tammy Duckworth, who lost both of her legs in a grenade attack while serving in Iraq.

But at a time when many in the disabled community feel their rights are under threat, organizers with the National Council on Independent Living decided it was time to move beyond just activism.

Sarah Blahovec, the Disability Vote Organizer at NCIL who put the program together, said she was not aware of any similar training in the past, noting that some people had even questioned whether she should do it.

“There are lots of ideas about whether or not someone with a disability should even serve in office based on some really outdated beliefs and stereotypes,” she said.

Candidates often have to deal with those stereotypes on the campaign trail, and in some cases they’ve simply avoided talking about their disabilities, says Sally Friedman, a political science professor at the State University of New York at Albany who has studied disability representation in politics. Even Franklin Roosevelt, who was elected to four terms as president, rarely discussed the disease that left him with leg braces and largely avoided being photographed in his wheelchair.

There’s less stigma for those who were wounded while serving in the military, however.

“For veterans, it’s different,” Friedman says. “You have a story that’s about being a hero, that has to do with independence and breaking that stereotype.” Still, even then, many also choose not to discuss their disabilities. Former Sen. Bob Dole was injured during World War II, but he rarely talked about how his injuries affected him until fairly late in his career when he was running for president.

It’s not only challenging to talk about a disability once someone is campaigning for office, but the path to get there can contain obstacles as well.

Kings Floyd, who has worked in disability activism and at the Equal Employment Opportunity Commission, is attending NCIL’s trainings this summer to figure out whether she would like to run for office one day. She’s been involved in advocating for her community, but the D.C. resident says that she, like many people with disabilities, doesn’t have traditional political experience.

“I want to understand the process of how does someone go from being a regular Joe to holding this elected position,” she says.

“If you think about who’s likely to run for office, they’re often people who have been successful in business or professions, who have been very active in their local communities,” says Richard Scotch, who heads the sociology program at the University of Texas at Dallas. “People with disabilities have lower incomes, they are less likely to be employed, they are less likely to be civically engaged in their communities.”

Still, the disability community has a long history of advocating for its civil rights and this activism has seen an increase in fervor since President Donald Trump was elected president.

“It’s kind of a natural extension of what we’ve been doing for years,” Blahovec says of her effort to train more disabled people to run for office. “There’s so much being done right now and in the past couple of years around building political power in so many ways. The time is really ripe.”

To make her training program a reality, Blahovec secured grants and found a partner in Neal Carter, the founder of Nu View Consulting, who has worked on campaigns around the country. Carter invited consultants from a diverse set of backgrounds to lead the trainings and drew on his own experience as a black, disabled political consultant to help design a curriculum that would address basic questions such as how to get your name on the ballot and how to set up a campaign website as well as disability-specific topics such as how to tell a caregiver about your new campaign schedule and how to navigate canvassing with mobility restrictions.

“These are folks I can speak to without sugarcoating things,” Carter says. “This is my community and these are folks who understand because this is all our lived experience.”

Other organizations have offered training and support to candidates of various demographics for years, from EMILY’s List (for pro-choice Democratic women) to the Leadership Institute (for conservatives) to the Victory Fund (for LGBTQ candidates). But none of these programs focuses on issues specific to people with disabilities, and sometimes the trainings themselves lack necessary accessibility accommodations.

NCIL’s program is entirely online for this pilot series, and while organizers hope to expand it to include in-person trainings in the future, the webinar format allows disabled people to tune in from across the country without traveling. The sessions also include captioning services, a call-in option and plain-language slides provided to attendees in advance to help those who might need more time to process the presentations.

During the first webinar, Carter and political consultant Atima Omara gave participants an introduction to launching a political campaign and touched on topics including how to hire a diverse campaign staff that understands your needs, how to leverage your networks to raise money and how to talk to voters about both your disability and your campaign’s priorities. The other sessions will dive deeper into campaign operations, online strategy, messaging and fundraising.

One of the biggest potential issues for disabled candidates, according to Carter and Blahovec, is getting past the prejudice that people with disabilities can face not only from voters, but from other candidates, journalists and even their own political parties.

When Reyma McCoy McDeid ran for a seat in Iowa’s House of Representatives in 2018, she says her campaign ran into lots of pushback during the Democratic primary. “I spoke openly about being a black woman, about being on the autism spectrum, about being LGBT,” she says. “Honestly that was just so much diversity for the Iowa Democratic Party to grapple with that it was overwhelming.” McCoy McDeid tried to address people’s concerns about her candidacy, but without the support of a program like the one NCIL has now created, she says she felt like a “pioneer.”

Duckworth, who was the first disabled woman elected to Congress, says that any new group of people running for office needs support.

“This is a tough thing to do,” the Senator tells TIME. But even as more people from other minority groups have gotten elected around the country, the embrace of diversity has not yet extended to fully include the disability community. “I think the American public sees a disability as a weakness. It’s seen as being less-than,” Duckworth says.

She recalls that when she traveled to meet with U.S. forces in Japan last year, the American embassy there did not have an accessible bathroom for her to use. Duckworth was able to use the ambassador’s private bathroom, which was big enough for a wheelchair, but she noted that members of the public visiting the embassy would be out of luck if they needed similar accommodations. She recently returned to Japan and learned the embassy added accessible bathrooms for staff and the public after her visit.

“We need diversity in elected office from the municipalities and school boards all the way up to the White House,” Duckworth says. “We must look like our nation. When entire groups of people are left out of the halls of leadership, often times you overlook issues that are important.”

While some places are improving in the way they treat people with disabilities, Blahovec notes that other parts of American politics have gotten worse in recent years. The way that people speculated baselessly about Hillary Clinton’s health or tried to diagnose Trump with psychological disorders from afar, for example, can have real consequences for disabled candidates, Blahovec says.

“It doesn’t have much of an impact on people who are in power,” she notes, “but it does impact people within those communities who are being tied for better or worse to those candidates.”

Still, she hopes that the NCIL training program can help prepare candidates to deal with these kinds of stereotypes, and can eventually teach non-disabled politicians and their staffers to be more accepting too. In addition to Duckworth, Stacey Abrams and 2020 Democratic presidential candidate Elizabeth Warren have given this training their stamp of approval. A number of Democratic presidential candidates have made fighting for disability rights a part of their campaigns. The NCIL training this summer is timed to help people running in 2019 and 2020, but that’s just the beginning.

“This needs to be a true movement and that’s not something that one person or one small group can do,” Blahovec said.

For now, the campaign training is already helping those who are attending its first series.

Knox, the candidate in New Hampshire, said she loved hearing the questions other participants asked during NCIL’s first webinar. “It is so interesting to hear from other candidates facing challenges and yet so strongly committed to service,” she said. Floyd, the disability activist in Washington, said she left the first session feeling energized to learn more. “There were a lot of disability specific questions that I didn’t know and have a better understanding of now. And there’s a lot to follow up on,” she said.

And McCoy McDeid plans to team up with Blahovec to lead another presentation on running for office at the NCIL annual conference later this summer.

“That’s not directly a Reyma is running for office kind of thing,” McCoy McDeid says, “but it’s part of the process of further incorporating America’s largest marginalized population into an arena where they definitely should be: the political arena. There’s never been anything marketed for this population of people that said hey you can do this, you should do this, we need you to do this.” 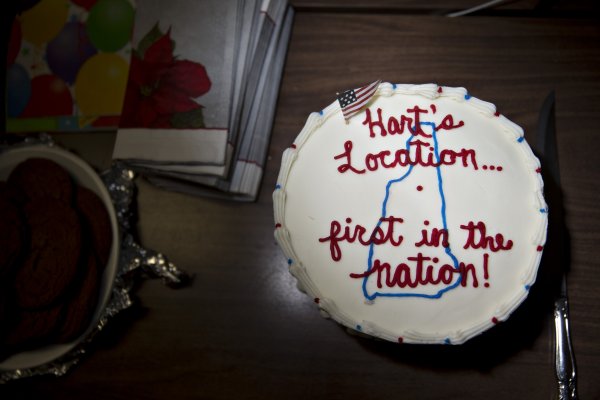