In Less Than a Minute, Biden Changes U.S.-Russian Dynamics

It’s been a busy week in Washington. President Joe Biden yesterday reversed his predecessor’s ban on transgender individuals from serving in uniform, boosted a Buy American program for manufacturing and set a new, ambitious goal of 1.5 million vaccinations a day. The House of Representatives sent its second impeachment of former President Donald Trump to the Senate, which got started on its history-making path. Sen. Rob Portman of Ohio announced that he is heading toward retirement and Janet Yellen is starting as the first female to lead the Treasury Department. Today, Biden is signing orders aimed squarely at racism. Oh, and Major and Champ moved into the White House with their humans over the weekend.

Perhaps lost in all that was a seismic development in Washington’s posture toward Moscow. The entire pivot took just 58 seconds, but reset four years of Trump-era ambivalence.

Biden, answering questions on Monday from reporters in a formal setting for the first time during his presidency, was asked directly about possible sanctions against Russia for the attempted poisoning and subsequent detention of opposition leader Alexei Navalny, or whether those were being delayed as his government tries to renew an expiring nuclear treaty with Russia called New START.

Biden, who spent years on the Senate Foreign Relations Committee as its top Democrats and was a leading voice on international affairs inside Barack Obama’s White House, knew precisely what needed to be said. He expanded the scope of the question to include not just the treaty, but reports that the Russians put bounties on the heads of Americans in Afghanistan, a massive hacking operation known as SolarWinds, and the sweeping intelligence review he just ordered on what the U.S. knows about Russia’s ongoing troublemaking. The ongoing protests across Russia have raised public awareness of it all, and Biden stepped in to lump it all together for a domestic and international audience.

“I find that we can both operate in the mutual self-interest of our countries as a New START agreement, and make it clear to Russia that we are very concerned about their behavior, whether it’s Navalny, whether it’s the SolarWinds or whether it’s the reports of bounties on the heads of Americans in Afghanistan,” Biden said. ”I will not hesitate to raise those issues with the Russians.”

In less than a minute, Biden put the United States on new footing and Vladimir Putin on notice. So when Biden and Putin spoke today for the first time under the new U.S. administration, Putin knew what to expect. According to U.S. officials, Biden did exactly as he promised yesterday and pressed Putin without holding out grand hopes for a reset or even improved relations.

Biden’s aides at the White House, State Department and throughout government had been offering a stiffened spine toward Russia. But as much as reporters in Washington respect new White House press secretary Jen Psaki and top State Department spokesman Ned Price, their words don’t carry as much weight as the President’s. After all, the Trump era often featured a split screen of foreign-policy hands being tough on Russia while the then-President seemed indifferent to Russia’s belligerence. It doesn’t really matter what the apparatchiks say if the top boss has other plans.

Biden yesterday demonstrated none of Trump’s deference to Putin, a relationship that puzzled Washington even before the 2016 election. Nor did he echo Obama’s effort to reboot Washington’s relationship with Moscow, which started in 2009 with a botched “reset” stunt that had then-Secretary of State Hillary Clinton handing her counterpart a plastic toy with the word peregruzka on it. The U.S. side thought it was Russian for ‘reset’ but it actually said ‘overload.’ The day left Foggy Bottom red-faced and Clinton with a deep distrust of the Russian openness.

More recently, Biden’s stance wasn’t George W. Bush’s look into Putin’s soul, or Bill Clinton’s post-Cold War navigation of a totally new dynamic. In all reality, Biden probably retreated to something closer to Ronald Reagan’s position: compromise on treaties when it makes sense without forgetting that he’s dealing with the vestiges of what Reagan famously called “the Evil Empire.”

Biden ran as a sensible candidate, a transitional figure for his party and his country. So far, he has pushed an agenda through executive orders that is far more progressive than Democratic skeptics expected and far more radical than Republicans believed he would dare. So it’s a curious comparison between Cold War Reagan and Post-Trump Biden, but it might be an accurate reminder that Presidents often can chase competing ideologies at home and abroad. (Just look at the second President Bush’s education reform agenda and his response to the terrorist attacks of 9/11.)

Biden’s foreign policy circle has its share of Russian hawks. His nominee to lead the CIA is a career diplomat who spent time as the U.S. Ambassador to Moscow. No one would mistake William Burns as a Russophile. Biden’s nominee for Secretary of State, Antony Blinken, is as clear-eyed as they come when it comes to Russia’s aggression, especially regarding the invasion of Ukraine and meddling in elections. Biden’s pick for the State Department’s No. 3 post, Victoria Nuland, is a veteran diplomat who served in administrations of both parties; she was a top adviser to Vice President Dick Cheney and an Obama Administration’s point-person on pushing back on Russia’s invasion of Ukraine. Biden’s National Security Adviser Jake Sullivan — a top hand during Clinton’s days at the State Department and one of Biden’s top foreign policy hands as VP — has been working the phones looking to extend the treaty and knows these issues inside and out.

But it’s also not a single-note chorus surrounding Biden. Most notably, his nominee for the State Department’s deputy secretary, Wendy Sherman, is an experienced and tough-as-nails negotiator who has sat across the table from America’s most bellicose foes and extracted diplomatic agreements with the likes of Iran and North Korea. She’s talked the U.S. out of some of the thorniest moments in recent diplomatic history. Where some around Biden are expected to urge hawkish stances, those like Sherman — who spent months on tough deals with nebulous details — are more prone to slow trust-building. The same is true of the former U.S. Ambassador to the United Nations, Samantha Power, who is heading up Biden’s development agenda. She used to court diplomats personally, and counted her Russian counterpart as a friend.

For months, Biden has been signaling to all who would listen that this was where he was heading. The Monday declaration at the former War Department headquarters next to the White House made it official, though. That’s not to say Biden is going to be shouting “tear down this wall” any time soon. But he’s also not relying on tchotchkes to solve one of the first major foreign policy tests of his presidency. 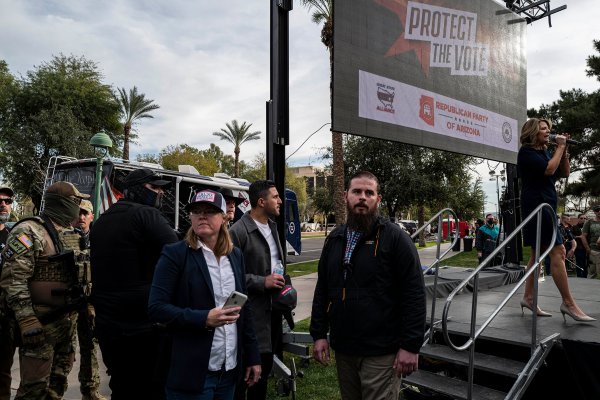 No, Trumpism Isn’t Over. Look at What Happened in Arizona
Next Up: Editor's Pick