Donald Trump Leaves the Presidency with a Whimper

This is not how Donald Trump wanted it to end.

He was insistent he would serve a second term. When he lost, he pushed the big lie that the election had been stolen from him, and then, on Jan. 6 — having exhausted other levers to reverse the vote count — he incited a mob to march to the Capitol.

If that deadly insurrection was the clanging climax of Trump’s presidency, his final day in office was a whimper.

As dawn broke in Washington on Wednesday, a cold rain gave way to a clear sky over a city carved into security cordons by rows of ten-foot steel fencing and concrete barricades. Thousands of police and national guard troops stood by, further signs that the cataclysm at the Capitol had forever erased this day from the list of America’s peaceful transitions of power.

Inside the gates of the White House, as Trump prepared to depart the building for the final time, I watched movers roll cabinets and chairs out of the front door of the West Wing and into a waiting truck. In the West Wing, the few Trump aides remaining removed pictures from the walls and took their last possessions. Around 7:30 am, the door to the offices of Trump press aides, normally open for White House reporters to enter and ask questions, was locked.

Trump’s final hours as president were marked by a flurry of pardons and commutations for 143 people, including a full pardon for his long-time political showman Steve Bannon, who used his podcast to help whip up Trump’s followers in the lead-up to the Capitol riot. Bannon had been indicted on allegations of defrauding people who sent money to fund a private section of the border wall. He also issued an order that frees his former aides to immediately make money lobbying the agencies they just worked at.

Trump is the first elected president in 150 years not to stand behind his successor during the inauguration and refuse to participate in the rituals of democratic transitions of power. There would be no handshake with Biden, no gesture of grace toward his successor as he leaves. When he was ready to depart, two Marines in dress uniform walked out of the White House portico and stood guard as President Trump and First Lady Melania Trump walked out to board the Marine One helicopter. A few minutes before, aides had loaded four file boxes, a desk protector pad and a leather Louis Vuitton duffle bag into the waiting chopper.

Marine One circles the National Mall carrying President Donald Trump as he departs the White House ahead of the inauguration.
Philip Montgomery for TIME

Trump stopped in front of the media and said serving as President was “the honor of a lifetime.” He said Americans are the “greatest people in the world” and the White House is “the greatest home in the world.”

Trump has long been his own stage manager, but this departure in front of reporters like myself who have been covering him for four years had the feel of an afterthought.

“I just want to say goodbye, but hopefully it is not a long-term goodbye. We’ll see each other again. Thank you very much,” he said. Hoping Trump would talk more and trying to elicit a moment of self-reflection, I shouted a question. “Do you regret January 6?,” I asked. “Do you have any regrets?” Trump didn’t answer.

Instead, he walked up the steps of the helicopter, turned, waved and pumped his fist in the air three times. Then the door closed behind him and the helicopters’ blades revved up and lifted Trump away from the White House for the final time at 8:18 am. The silhouette of the helicopter banked around the tall obelisk of the Washington Monument toward the east and disappeared. A handful of aides standing turned and walked back into the White House. One member of the White House staff bent over and rolled up the red carpet.

Trump lived out the final weeks of the presidency with two competing ambitions: one, to find a way to overturn the will of the voters, and two, to set himself up for a lucrative media deal and cement his long-term control over the Republican party. But one swamped the other. His thirst to find a way to stay in office has threatened his hopes for a lasting political life after the Presidency. Later in the morning, as Republican leaders joined the incoming President Joe Biden at a church service, Trump’s growing irrelevance was already on full display.

Twenty minutes later, Trump waved to a sparsely-attended goodbye ceremony at Andrews Air Force Base. (Many of his former aides and cabinet secretaries declined invitations to attend.) Even on a small scale, the scene echoed Trump’s penchant for the trappings of despotism. The audience chanted “Thank you Trump,” a military band played, and a crisp wind whipped a line of flags behind him.

“I will be watching. I will be listening. And I will tell you that the future of this country has never been better. I wish the new administration great luck and great success. I think they’ll have great success. They have the foundation to do something really spectacular,” Trump said, without acknowledging that voters had sent him packing. “We will be back in some form,” he said. “Have a good life.”

As Trump waved goodbye for his flight to Florida, loudspeakers blared YMCA by the Village People. 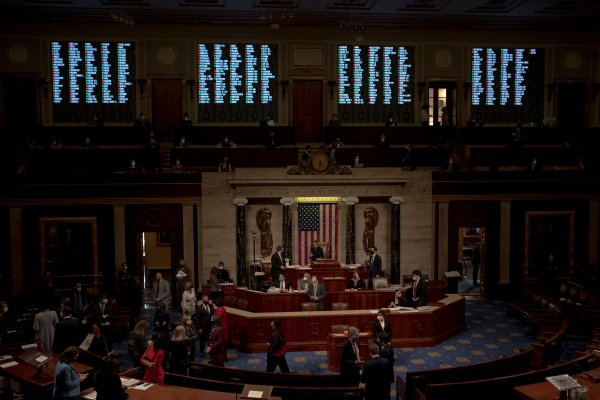 The GOP's Last Chance to Quit Trump
Next Up: Editor's Pick