Hours Before Inauguration, Biden Looks Ahead to a New American Dawn

A field of flags on the National Mall in Washington, D.C., on Jan. 19, one day before the inauguration of President-elect Joe Biden and Vice President-elect Kamala Harris. The public art display features nearly 200,000 flags, representing Americans who would have gathered for the inauguration, according to the organizing committee.
Philip Montgomery for TIME
By Charlotte Alter

On a cold and cloudless Tuesday afternoon, through the dusk of the last day of a dark chapter in American history, Joseph R. Biden Jr, spent his final few hours as President-in-waiting pointing towards the light.

These were the dwindling moments of Biden’s life as an ordinary citizen — but not many other ordinary citizens have served in the Senate for decades, as Vice President for two terms or run for President three times. On Tuesday, Biden was a civilian; on Wednesday, he would take his spot in the pantheon of American Presidents.

His final day as a not-yet President was characterized by the humanity that has sustained Biden through his long and unpredictable career, through heartbreak and triumph, political headwinds and lucky breaks. Biden is a man with a beating Irish heart, a father who lost a wife, a daughter and a son before their time, a politician who has built his loyal base around a shared fluency of grief. So it was no surprise that, as he stood at the end of a painful era and at the dawn of a new one, the next American President wiped away a few tears.

Speaking at the Major Joseph R. “Beau” Biden, III National Guard Reserve Center, standing at a lectern emblazoned with the name of his deceased son, Biden was overcome. “This is kind of emotional for me,” the President-elect said, wiping away a tear as he addressed some of his fellow Delawareans for the last time before his Presidency. “You were with me my whole career, through the good times and the bad.”

“It’s deeply personal that our next journey to Washington starts here, a place that defines the very best of who we are as Americans. I know these are dark times, but there’s always light,” he said. “That’s what makes this state so special, that’s what it taught me… there’s always light.”

Preparations on Pennsylvania Avenue for Biden-Harris inauguration events, outside the gate of the White House, on Jan. 18.
Philip Montgomery for TIME

“As I told Beau on that station waiting for Barack, I said, ‘Don’t tell me things can’t change,” he recalled. “They can and they do. That’s America. That’s Delaware. A place of hope and light and limitless possibilities.”

Biden again appeared overcome with emotion as he remembered Beau, the Attorney General of Delaware who died of cancer in 2015. “I only have one regret, that’s he’s not here, because we should be introducing him as President,” he said. “But,” he added, his voice pivoting away from the memory, “We have great opportunities. And Delaware has taught us that anything is possible in this country.”

From Wilmington, Biden and his family flew to Washington, landing in a city under lockdown. The Trumpist siege of the Capitol had turned D.C. into a quasi-war zone ahead of Inauguration Day: there were 25,000 National Guard keeping watch over the city, ten times as many as the number of troops in Iraq or Afghanistan. Biden would be sworn-in amid domestic terror threats and mass insurrection, after a predecessor who so disdained the American tradition of the peaceful transfer of power that he incited a riot to try to interrupt the certification of the electoral votes. On the last day of Trump’s presidency, the nation surpassed 400,000 COVID-19 deaths.

But the dusk of Trump’s presidency was the dawn of Biden’s. And as the nation passed that dark COVID-19 milestone, Biden, Harris, and their spouses held a memorial on the National Mall for the dead, looking out at 400 lights to commemorate the 400,000 victims. Lights around the nation shined in their memory, in the first nationwide memorial for the pandemic’s dead. “To heal, we must remember,” Biden said. “Between sundown and dusk, let us shine the lights in the darkness along this sacred pool of reflection and remember all who we have lost.”

That night, he and Dr. Biden went to sleep at Blair House. The next morning, the sun would shine on a new President, and a new nation. 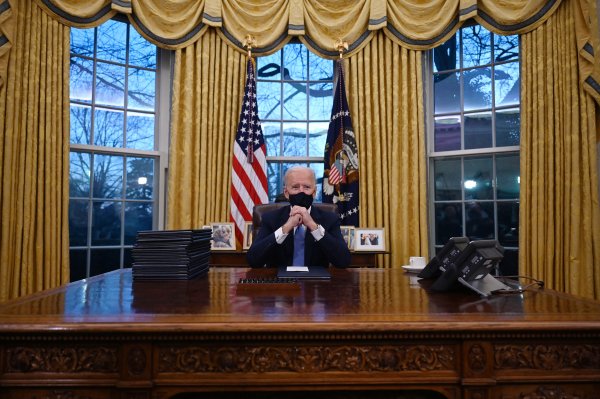